In New York City on Wednesday, the U.S. Women’s Soccer Team will receive a ticker-tape parade along the “Canyon of Heroes” to celebrate their World Cup Soccer victory over the Netherlands last week.

The American women dominate the sport: they have taken home half of the women’s World Cup trophies, numerous Olympic gold medals, and international championships. They win a lot more than the American men’s team, which lost to Mexico in a regional final the same week the women won.

Many commentators and fans reveled in the fact that this women’s team has adopted the swagger of their male peers on the pitch, such as when Alex Morgan pretended to sip tea after scoring a goal on the British team. (Less impressive was the team’s obnoxious boastfulness during their 13-0 blowout of Thailand in their first World Cup match. We get it: You’re awesome. You don’t need to rub the other team’s faces in it).

But their World Cup victory has also brought greater attention to the team’s claim that they are not receiving equal pay. The women’s team is suing their employer, the United States Soccer Federation (USSF), claiming they are the victims of pay discrimination. After the final game of the World Cup in Lyon, France, fans chanted “equal pay” as the team celebrated their win.

Politicians eager to publicize their feminist bona fides eagerly piled on to endorse this narrative. Hillary Clinton tweeted at the USSF, “Equal work deserves equal pay.”  Elizabeth Warren joined the chorus demanding the female players get paid as much s the men, along with Kirsten Gillibrand and Kamala Harris.

One wonders how many of these suddenly enthusiastic women’s World Cup fans have ever bought a ticket to a regular season women’s soccer game or watched one on television. As one woke Buzzfeed editor admitted in a bizarre piece about the World Cup winners, “I don’t closely follow most sports, soccer included—I still barely understand what offsides means, no matter how many times my friends try to explain it to me—but this World Cup, as with the last, I was drawn in by all these incredible lesbians.”

The narrative encouraged by the media and the players themselves is that they should be earning as much as the men–after all, they are world champions and the men are not. Washington Post columnist Eugene Robinson even argued that the women “shouldn’t be paid as much as their counterparts on the men’s team. The women should be paid more. A lot more.”

But this narrative deliberately ignores some basic economic realities as well as the women’s team’s own objectives.

Take the differences in World Cup prize money awarded to the women’s team versus the men’s team. The women will share $30 million in prize money, compared to the $400 million last year’s men’s World Cup champions won.

This seems unfair until you look at the differences between the revenue generated by men’s soccer and women’s soccer. Men’s soccer worldwide is the most popular sport; women’s soccer doesn’t come close. To take the starkest example: the men’s World Cup in Russia in 2018 brought in $6 billion in revenue. The women’s World Cup this year is expected to bring in $131 million. Prize money is taken out of this revenue. As a percentage of the total revenue earned, the women were in fact paid better than the men.

It’s also worth noting that the path to qualifying for the men’s World Cup is much more arduous and competitive than it is for the women’s World Cup. The men have to win more games over a longer period of time to qualify than do the women.

Some of the confusion about the U.S. team’s claims about equal pay stems from the fact that the American women’s team earnings are a separate issue from what FIFA awards in prize money to the men’s and women’s World Cup winners.

Worldwide, professional soccer clubs for men are much more lucrative and successful (and can afford to pay the men who play for them) than the women’s clubs, which simply aren’t producing the same kind of revenue as the men’s clubs and can’t fill as many seats at their games as the men do (or draw as many television viewers). This might eventually change as more women in more countries play professional soccer, but for now, men’s and women’s soccer are effectively functioning like two different sports in terms of revenue and audience worldwide.

In the U.S., women’s games have recently begun to generate slightly more revenue than men’s games; according to the Wall Street Journal, from 2016-2018, the women’s games generated $50.8 million and the men’s games $49.9 million, a sign of growing enthusiasm for women’s soccer. But that game revenue represents only one-quarter of the USSF’s total revenue. The rest comes from corporate sponsorships and TV broadcasting rights. And since the Federation sells those rights for both teams together, it’s nearly impossible to tell which team generates more (although TV ratings consistently show viewership for men’s soccer is much higher than for women’s soccer).

It is also misleading to compare the men’s and women’s teams’ pay because each team has a completely different pay structure. The women’s team collectively bargained for and won a pay structure that guarantees them salaries, severance pay, medical benefits, and some performance-based bonuses. The women’s team wanted the security of salary-based pay rather than purely performance-based pay, and they wanted to guarantee a salary even for players who were on the roster but didn’t play.

By contrast, the men are strictly pay-for-play. They do not receive a salary or additional benefits like health insurance or severance pay. Their pay structure is performance-based. As Michael McCann, who directs the Sports and Entertainment Law Institute at the University of New Hampshire School of Law told Minnesota Public Radio, “The two systems [for paying women and men] are designed differently . . . The men’s system pays players when they play, through bonuses, whereas the system for women’s players has guaranteed pay and also pays for certain bonuses as well. But it’s structured differently.”

There are, however, some clear inequalities between the men’s and women’s teams that should be rectified. The women should demand and get equality when it comes to equal percentages of their budgets spent on advertising and P.R., travel and training budgets, and equal per diems for food, for example. But it’s disingenuous of the women’s team to claim they aren’t getting “equal pay” when they are the ones who agreed to a payment structure that is different from the men’s team.

The women’s team has options. They can try a revenue sharing model that would base men’s and women’s compensation on the amount of money they actually bring to the federation (the Women’s National Team Player’s Association has suggested trying this, and the men’s team player’s association supports this). They might also develop new licensing opportunities and revenue streams. What they shouldn’t do is continue to embrace a deliberately misleading narrative about equal pay.

Professional sports are part of the entertainment industry; as any professional actor or singer or artist can attest, the market for your skills determines your compensation. Right now there is simply not as much interest and enthusiasm worldwide for women’s soccer, and it doesn’t generate anywhere near as much revenue as men’s soccer.

If the U.S. women’s soccer team wants to inspire future generations of soccer fans and players, they would do better to play the long game of cultivating interest and enthusiasm for the sport, which will increase demand for their skills and increase their earnings over time. It’s a better use of their energies than promoting misleading narratives about discrimination. 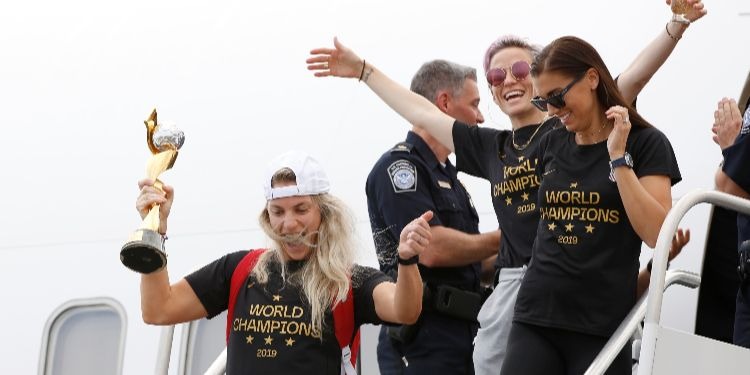