The main feature at Jewish Ideas Daily this morning is a collection of my short essays on Retrieving American Jewish Fiction. Starting with Emma Wolf’s Other Things Being Equal (1892), the first American novel written by a Jew on a Jewish theme for an American audience, I trace a 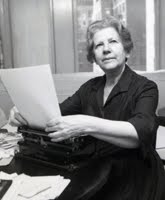 line of descent through better known names and lesser, ending with Henry Roth’s classic Call It Sleep in 1934. (One title that was not included on the roll call is Elias Tobenkin’s Witte Arrives, the first radical novel by a Jew in America.) A short bibliography of American Jewish fiction from 1892 to 1972 can be found here.

My favorite of the bunch, though, remains Bread Givers by Anzia Yezierska (pictured at right). It may be, as I said elsewhere, the first Yiddish novel ever written in English. Yezierska’s novel is the best evidence for the proposition that American Jewish fiction is differentiated, not by having been written by Jews, not by being about Jews, but primarily by its language — Judeo-English, if I’ve got to call it something.

In his slashing account last week of how English departments have almost done in American literature, Joseph Epstein characterized “Jewish novels” as one of the currently favored “sub-forms” of the American novel. He lumped them together with “science fiction, eco-fiction, crime and mystery novels . . . Asian-American novels, African-American novels, war novels, postmodern novels, feminist novels, suburban novels, children’s novels, non-fiction novels, graphic novels and novels of disability.” That is, any talk about American Jewish fiction is likely to be little more than the way in which some literary critics practice the identity politics that now dominates English departments.

Some, maybe. Not all. In her sharp-minded critical study Call It English, Hana Wirth-Nesher of Tel Aviv University differentiates Jewish fiction by its multilingualism. She is not the first. The Yiddish critic Israel Elyashev (1873–1924), who wrote under the pseudonym Baal-Makhshoves, famously quipped: “One literature, two languages.” At least two! The critic Sh. Niger, whose real name was Shmuel Tsharny (1883–1955), wrote an entire book on Bilingualism in the History of Jewish Literature. It was published, significantly enough, in Detroit in 1941. “[O]ne language has never been enough for the Jewish people,” he wryly noted. The Jewish literary practice, very nearly as a condition of exile, has been to write in two languages at once. “[T]his did not bespeak a switch from an alien language to a language that was one’s own,” Niger explains. “No, here it was a case of a desire to add a second language of one’s own to a first.”

American Jews are little different, even when they are monolingual in English. Thirty years ago the linguist Deborah Tannen, who earned a reputation by arguing that women talk in a fundamentally different way from men, said much the same thing about New York Jews. In her essay “New York Jewish Conversational Style,” Tannen claimed that Jewish speech is different from other styles of speech in four ways:

1. Topic (a) prefer personal topics, (b) shift topics abruptly, (c) introduce topics without hesitance, (d) persistence (if a new topic is not immediately picked up, reintroduce it, repeatedly if necessary).
2. Genre (a) tell more stories, (b) tell stories in rounds, (c) internal evaluation . . . over external (i.e., the point of a story is dramatized rather than lexicalized), (d) preferred point of a story is teller’s emotional experience.
3. Pacing (a) faster rate of speech, (b) inter-turn pauses avoided (silence is evidence of lack of rapport), (c) faster turntaking, (d) cooperative overlap and participatory listenership.
4. Expressive paralinguistics (a) expressive phonology, (b) pitch and amplitude shifts, (c) marked voice quality, (d) strategic within-turn pauses.

Nearly all the features of Jewish speech that Tannen describes can also be found, louder and more insistent, in American Jewish fiction. Her paragraph on the pacing of Jewish conversation is an excellent short introduction to Saul Bellow’s prose style.

Starting in the 1960’s, American literature enjoyed a “concentrated burst of enthusiasm for writers consciously Jewish,” as the non-Jewish writer Edward Hoagland said with some annoyance in COMMENTARY. In an interview with Playboy the same year, Truman Capote blamed “the Jewish Mafia in American letters” which “control[s] much of the literary scene” through “Jewish-dominated” publications — publications like COMMENTARY, for instance.

As proud as I am to serve as an enforcer for the Jewish literary mafia, I think the real explanation for the sudden and prolonged prominence of American Jewish novelists is much simpler. They sound different from other American novelists. And the sounds they make, “the jumpy beat of American English,” as Philip Roth once described it, are hard to resist. Other novelists sound laconic, if not sleepy, by comparison. American Jewish fiction is the fiction that is written in a distinctive voice — Jacob’s voice.