Jacques Barzun, the great cultural historian whose writing career spanned more than six decades, has died in San Antonio at the age of 104. A gifted scholar with a clear bracing style that appealed to ordinary educated readers, Barzun published formative books in an astonishingly wide variety of fields, including the humbug of race (Race: A Study in Modern Superstition, 1937), intellectual history (Darwin, Marx, Wagner, 1941), classical music (Berlioz and the Romantic Century, 1950), practical rhetoric (Simple and Direct, 1975), and cultural criticism or what he bemoaned as the “conversion of culture into industry” (The Culture We Deserve, 1989). 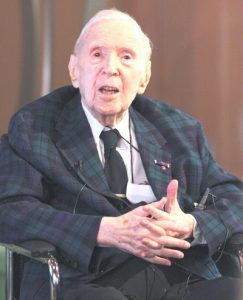 Perhaps Barzun’s most famous and influential book was one of his earliest — Teacher in America, published when he was not yet forty. (Here is the Preface to a 1983 reprint of the book.) At the outset, Barzun announces that he will not be holding forth on the grand subject of education (“brooding and wrangling about education is bad”), but will be talking simply and directly about a homelier subject — teaching, the face-to-face transaction between a man or woman of learning and his or her students. (And Barzun believed that teaching was a transaction, not a relationship. He was suspicious of teachers who became overfamiliar with their students.)

Addressed to young teachers just starting out, Teacher in America expressed skepticism toward methods (especially those of progressive education), multiple-choice tests, Great Books, vocationalism. I first read the book when I headed off to graduate school, and it has remained with me ever since. I can hear Barzun’s voice when I speak to my students, especially when I abandon my lecture notes and chase their need to understand down strange and overgrown paths. University men and women who want to extinguish the bonfire of the humanities could do worse than adopt Teacher in America as their guide. A book that deserves to be called a classic if any book does, it is still in print from Liberty Fund.

Most of what Barzun wrote was merely the extension of his teaching to the printed page. And all of it avoided theory and took a straightforward practical approach, which was only to be expected from someone who admired William James. (His Stroll with William James is the best introduction to James’s thought and character.) In addition to his famous “writing manual” Simple and Direct, Barzun also wrote (with Henry F. Graff) The Modern Researcher, first published in 1957 and now in its sixth edition. It is the single best how-to book on scholarly inquiry. (I speak from personal experience, since I could never have written my PhD dissertation without its help.)

Although he did not encourage disciples, Barzun was beloved by an astonishing number who remained his students for life, even if they had never sat in his classroom. I was one of them. After receiving a beautiful note of appreciation from him for an essay I had written on the controversy over Carol Iannone’s appointment to the National Endowment for the Humanities, I asked whether he might contribute a preface to my book The Elephants Teach. Cheeky of me, I suppose — but my history of creative writing was consciously written in l’esprit de Barzun. “We have here,” he wrote of my book, “a panorama — a pageant, rather — of the American will-to-art.” Barzun recognized his spirit, inhabiting a house of intellect constructed from his own patterns, but was too modest to say so outright.

Born in 1907 in a Parisian suburb, Barzun came to America for good at 13 and graduated from Columbia University seven years later. He stayed on in New York until he was 89, when he transplanted himself to the Republic of Texas. Although he is being described in the obituaries as a “public intellectual,” he was not that. In a word, he was a humanist — a historian, a teacher, a man of culture, a university man (who was saddened to see the loss of the university as a seat of learning), and an American envoy of the once-proud tradition of “French clarity.” There will never be anyone like him again.

Update: Some of Barzun’s spiciest remarks on intellect and the intellectual life are collected here. For those who have never read Barzun, they give a sample of his style, which should leave you wanting more.