Peter Cameron’s sixth novel is strangely irrelevant and completely unnecessary. It meets no demand, fills no need, gratifies no craving, strokes no ideology. Coral Glynn is very little more than a wonderful delicious treat for readers who feasted on the novels of Barbara Pym and Elizabeth Taylor years ago and despaired of ever finding anything like them again.

Cameron is remarkably open about the influence of these “British women writers,” as he describes them on his website. But it’s one thing to be influenced by them and another thing entirely to attempt (and to pull off) what he has done here. It’s as if a living composer were to write a new symphony in the style of Haydn. In his latest novel, Cameron faithfully revives a fictional mode that disappeared at least three decades ago without ever finding a warm reception on these shores. 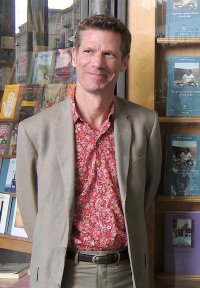 Coral Glynn is his loving homage to this mode of English fiction, an adventurous striking out into a real world created wholly by books and not by personal experience. A New Jersey boy (except for two years with his parents in London), Cameron sets the novel in an English country house located in a Midlands provincial town. Although he is known as a gay writer (and though one character in the novel is a gay man), he is interested in homosexuality here only in as far as it is perhaps the clearest example of love that leads to cruelty and makes cowards of lovers.

His title character is a 20- or 21-year-old nurse who arrives at Hart House in the spring of 1950 to care for the mistress, who is dying of cancer. Standing a few miles outside of Harrington, a fictional village that Cameron locates in Leicestershire, Hart House is undistinguished, containing “nothing of anybody’s; it was that kind of house: the people who lived in it made no real impression upon it.” Except for a housekeeper, the only other person living there is Major Hart — his Christian name is Clement — the sole surviving son, who was wounded in the war under mysterious circumstances (or at least he doesn’t want to talk about them).

Within a few days of her arrival, Major Hart conceives the “idea” of marrying Coral. “She is a lovely girl,” he tells his friend Robin, with whom he seems to have had a brief affair several years before. “I rather like her.” And besides, he is convinced that she is his “last chance.” After his mother’s death, deeply ashamed of the wound that has left him with a burned and useless leg, he expects to become a hermit. “I will never meet another girl again,” he remarks, “if I become a hermit.”

Old Mrs Hart dies while Coral is on her day off. The housekeeper blames her (“If you’d’ve been here you could have done something”), but Coral comforts Clement while he sobs in grief. And the next day he asks if she would like to stay on at Hart House. “As my wife,” he quickly adds. She is naturally surprised. She hadn’t even realized that he had feelings for her. “Very warm and tender feelings,” he assures her. “Of course, you deserve more than that,” he goes on. She deserves love. “And you!” Coral interrupts. Clement disagrees:

No, I don’t. And I’m not asking for love, or even wanting it. I just want not to go all bitter and dead inside like my mother. And living here, alone, I know that I would. I can feel it already, something inside me, someone inside me, moving from room to room, shutting all the doors, shuttering the windows.

Coral is alone in the world too, an only child whose mother and father are both dead. And so she marries Clement.

The sequel is perhaps the briefest marriage — if not the oddest — in fiction. Before her wedding day is over, Coral falls under suspicion for murder and flees to London. She finds work at a Catholic hospital and rooms in the house of a Polish woman who had once been a classical pianist. She writes three letters to Clement in care of his friend Robin, but he never answers. And so she settles into a life that, upon reflection, is not really a bad life:

This is more happiness than I deserve, even if it is not exactly happiness. But it was a sort of freedom: there had been so many problems — it had all been problems, everything had been a problem for such a long time — and to be released from that perpetually increasing darkness was a kind of joy.

Not quite a year later Robin’s wife discovers the letters hidden in a chest. Robin defends himself by saying that he has saved Clement from a “hell” of loneliness and misery that Coral would have increased “a ten — a thousand — fold.” He accuses Clement of “cowardice and cruelty” in not returning Robin’s love. He hid the letters from Clement, and then he burned them, out of love: “It is my last and final way of loving you,” he swears.

Clement is a coward, but not because he is afraid to live openly as a “pouf,” as he degradingly calls Robin later on. He is a coward because he bows his head to a self-imposed sentence without even questioning it, let alone raging against it. A hermit’s life, loneliness and misery, love and tenderness — they are all one to Clement, because they are equally to be suffered. What he wanted was to separate himself from the world, and thus to surrender any claim (and duck any responsibility) over what occurs within it. When he finally bestirs himself to seek out Coral in London, it comes as little surprise that she has embraced Clement’s vision of life: “Well, whatever happened, I think we both saw right to give it up,” she tells him. “Everything has happened as it ought.”

Or has it? Cameron has one more surprise in store for his lucky readers — a coda, many years later, in which Coral and Clement, divorced in 1954 “on the basis of three years’ desertion,” find love at last. And from unexpected quarters. Both find someone who catches them fast to the world and its unpredictable life, “for what is love,” Cameron wonders, “if not wanting someone alive?” That — not a homosexuality that dares to speak its name, nor marriage that is a lasting substitute for a hermit’s life — that is the last and final way of loving. And as Coral Glynn masterfully shows, it never happens as it ought.