The equivocation in his title is the key to Christopher R. Beha’s first novel. “What happened to so-and-so?” friends ask. They mean that so-and-so has disappeared from their social network, their gossip circle — not that so-and-so has disappeared for good. They want to know what so-and-so has been doing the last few years, like them, to settle into a marriage, raise children, promote a career. They don’t mean, “What changed? When did she become a different person?” Not until the end of Beha’s scrupulous novel does it become clear that what happened to Sophie Wilder is a more profound question than it first appears. 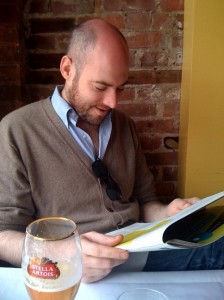 Author of The Whole Five Feet (a memoir of a troubled year spent reading straight through the Harvard Classics on their centennial) and an associate editor at Harper’s magazine, Beha has written a deeply literary first novel. I don’t mean that it is another frail workshop novel in which disappointments and epiphanies that would go overlooked anywhere else are exaggerated to compensate for the absence of a plot. There is a surprising amount of action in What Happened to Sophie Wilder. And if it is not quite the action of a spy thriller, it is more action than most would enjoy having visited upon them — sexual betrayal, the suffering of end-stage cancer, the drying up of talent and ambition, the crisis of faith.

Beha’s novel is literary in being about literature. Charlie Blakeman is a novelist whose first book caused barely a ripple. Sophie Wilder is the author of Visiting Professor, a collection of stories that caused a stir. Both have foundered upon the dilemma of a follow-up. They met in college at New Hampton, a liberal arts outpost somewhere in New Jersey. More appropriately, they met in the freshman-year fiction-writing workshop taught by a “near-famous novelist.” Sophie’s first story for the class, a 75-page Gothic tale about orphaned children, a pack of wolves, and murder (a novella, really), is unlike anything written by mere freshmen. Her literary opinions are unusual too. When asked whether she likes the Beats, she replies:

There’s no control, no sense of form. They romanticize their methods, as if we should read how they wrote instead of what they wrote. Eventually it all turns sentimental, like a conversation with a sloppy drunk.

Like Charlie, I was immediately smitten. And like everyone else in her life, I was puzzled and concerned when Sophie, who showed such promise, stopped writing. Initially this appears to be the sense of Beha’s title: what happened to Sophie Wilder the writer? Everyone keeps asking, especially the agent who got her a two-book contract with a major New York publisher. When Charlie meets her again after six years — Sophie had sabotaged their college romance by sleeping with his older cousin — they immediately fall to discussing their first books. Charlie admits his was not very good, but at least it was a start. “I’ll do better with the follow-up,” he says. “You’re precocious,” Sophie says. “It takes most writers years to regret their first book.” Charlie asks how her own follow-up is going. Sophie tells him it’s finished. Charlie responds enthusiastically, asking when he can read it. “It’s not that kind of finished,” Sophie explains. “No one’s ever going to read it.”

Charlie persists in misunderstanding her, but Sophie means that she is finished with the literary life. In the years since they were college lovers, Sophie has converted to the Roman Catholic Church. Her agent is excited by the news. “It’s like Graham Greene or something,” he says. “I mean, who converts anymore? Unless they’re converting away.” The fleeting reference to Greene is nice, because What Happened to Sophie Wilder includes what is perhaps the best conversion scene in an English-language novel since The End of the Affair. Raised by parents who were indifferent to religion (“they lacked the feeling for it, what she would learn to call the capax Dei, the capacity to experience God”), Sophie is not prepared for what happens to her when, by chance, she picks up an old copy of Thomas Merton’s The Seven Storey Mountain. The book does not convert her. She finishes it and realizes, “There had been no change within her yet.” But Merton leads to other Catholic writers, and Sophie discovers “an entire strain of human feeling and thought,” which until then had been “utterly foreign to her.” A literary intellectual, she commences the study of a new literature.

Then the unexpected happens. Attending mass at a small Catholic church, Sophie suddenly feels — she doesn’t know how else to say it — “for a time, occupied.” Later she would agree that the “occupying force” was the Holy Spirit. At the time, though, she knows only that she has been taken over by “something outside of herself, something real, not an idea or a conceit or a metaphor.” She rebuilds her life around the moment of revelation, although it never recurs. In the language of Christian theology, she is gennathei anothen — “not ‘born again,’ exactly, but ‘born from above.’ ”

She finds a use for her religious faith when her father-in-law emerges from years of estrangement and mystery to ask for her help. Bill Crane is hospitalized after surgery, and he wants out. St. Vincent’s will only release him to the care of a family member. He wants nothing more, but Sophie learns that he is suffering from end-stage stomach cancer. Her religious instruction forbids her to abandon him. And so she moves into his squalid apartment, intending to care for him as the light goes out; perhaps even, she reflects, to save his soul. Crane is furious: he wants only to be left alone to die. As the pain spreads and deepens, he begs her to kill him. For a time, Sophie stands by Catholic law. But in the end, she relents.

What happens next is amazing. Amazing and frustrating, since book-reviewing ethics prevent me from spoiling the novel’s ending. I’m not sure I could do it justice anyway. This much I can say. The last pages of the novel reorganize everything that has come before. You don’t close the book, but immediately return to the beginning to sort things out with a newfound understanding — and not just of Beha’s novel.

Beha writes his novel from alternating points of view; or, as Sophie herself would say, in alternating styles (“What was style, if not a point of view? A set of values?”). Every other chapter is narrated in first person by Charlie, who remains devoted to the principle of fiction (“[T]he story made the truth irrelevant,” he believes. “The telling was what mattered”). The even-numbered chapters are told in third person, from Sophie’s perspective — the perspective of a devotee to a different principle altogether. The difference in their values culminates in two different endings, two utterly different and incompatible versions of What Happened to Sophie Wilder. Outside the styles and values of his two main characters, Beha gives his readers no assistance in determining what really happened. Fiction is challenged by religion; religion is challenged by fiction; and readers are challenged on the grounds of their deepest values.

What Happened to Sophie Wilder is a remarkable first novel, which should especially be read by those who have given up on contemporary literature. Along with handing them something good to read, it will renew their faith in what literature is capable of achieving.