As part of their annual “Israel Apartheid Week,” the Columbia Students for Justice in Palestine, in conjunction with Columbia/Barnard Jewish Voice for Peace, are hosting an event Monday, February 27th entitled “Zionists are Racists.”

If you buy into Dr. King’s assessment that the arc of the moral universe is long but bends toward justice, then you buy into the idea that as humanity progresses, we sometimes must look back at the actions of the past and recognize that they do not conform to our standards of morality. The very essence of progress is predicated on acknowledging there is a problem which needs addressing.

The students who are hosting this offensive, bigoted, and hateful event are guilty of precisely the opposite. They drag us back to a past that is so shameful, it has already been corrected.

The 1975 United Nations General Assembly resolution that infamously gave the world “Zionism is Racism” was revoked in 1991 with 111 nations voting in favor of its repeal. Twenty-five countries voted against the repeal, including the shining beacons of democracy and equality of Cuba, North Korea, Iran, Iraq, Mauritania, Saudi Arabia, Somalia, Sudan, Syria, and Yemen. The Students for Justice in Palestine and Jewish Voice for Peace are keeping fantastic company.

Even during its adoption, the righteous spoke out against the resolution. Daniel Patrick Moynihan, who was, at the time, America’s ambassador to the United Nations said:

There will be time enough to contemplate the harm this act will have done the United Nations. Historians will do that for us, and it is sufficient for the moment only to note the foreboding fact. A great evil has been loosed upon the word. … The proposition to be sanctioned by a resolution of the General Assembly of the United Nations is that “Zionism is a form of racism and racial discrimination.” Now this is a lie. But as it is a lie which the United Nations has now declared to be a truth, the actual truth must be restated.

Moynihan’s words were prescient. Years later, calling for the resolution to be revoked, President George H.W. Bush said, “to equate Zionism with racism is to reject Israel itself, a member of good standing of the United Nations…. This body cannot claim to seek peace and at the same time challenge Israel’s right to exist. By repealing this resolution unconditionally, the United Nations will enhance its credibility and serve the cause of peace.”

These words may not trouble the organizers of Monday’s event, who themselves challenge Israel’s right to exist and care little about “serv[ing] the cause of peace,” but they should trouble the rest of Columbia’s student body. Zionism is not racism. To equate the two is abhorrent and bigoted. That shouldn’t have needed to be said 41 years ago, and it certainly shouldn’t need to be said today. 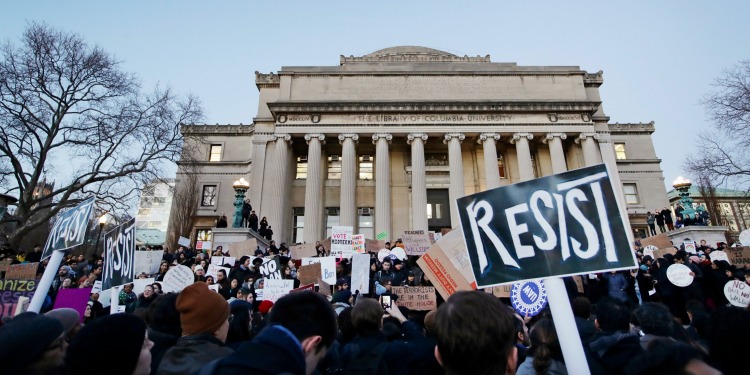 The Lunatics Running the COVID Asylum