In late April, President Obama released a proclamation declaring May 2016 as Jewish Heritage Month. Studying the text of the proclamation can tell us a lot about modern American left-wing anti-Semitism.

To be clear, there is nothing remotely anti-Semitic about the proclamation itself, and I’m not accusing the president or his staff in any way of promoting anti-Semitism. But I do note that the proclamation’s discussion of Jews’ contributions to American society is consistent with a particular left-wing view of Jews—which is that Jews have two predominant roles to play in the world, either as victims or as advocates for progressive causes.

Here are the first two paragraphs of the proclamation:

At America’s birth, our Founders fought off tyranny and declared a set of ideals—including life, liberty, and the pursuit of happiness—that would forever guide our country’s course. For generations since, Jewish Americans, having shared in the struggle for freedom, have been instrumental in ensuring our Nation stays true to the principles enshrined in our founding documents. They have helped bring about enduring progress in every aspect of our society, shaping our country’s character and embodying the values we hold dear. This month, as we pay tribute to their indelible contributions, we recommit to ridding our world of bigotry and injustice and reflect on the extraordinary ways in which Jewish Americans have made our Union more perfect.

Many of the Jewish people who reached our Nation’s shores throughout our history did so fleeing the oppression they encountered in areas around the world. Driven by the possibility of charting a freer future, they endeavored, on their own and as a community, to make real the promise of America—n their individual lives and in the life of our country. Determined to confront the racism that kept this promise from being fully realized, many Jewish Americans found a cause in the Civil Rights Movement that—in its call for freedom and justice—echoed the timeless message of Exodus and the Jewish people’s journey through the ages. Reflecting on the march in Selma, Rabbi Abraham Joshua Heschel once noted, “I felt my legs were praying.” From the fight for women’s rights to LGBT rights to workers’ rights, many in the Jewish American community, drawing on lessons from their own past, have trumpeted a clarion call for equality and justice.

I’m sure if you asked whoever drafted the president’s proclamation about these other matters, he would say something along the lines of, “yeah, that stuff is nice, too.”

But for some progressives on the far left, including some progressives of Jewish descent, that other stuff isn’t “nice too.” To them, Jews exist only for the role assigned to them by the progressive mythos—to use their experience of oppression and their privilege to fight for the rights of others, and then to assimilate or disappear.

Ever since Karl Marx himself stated as much, there has been a significant strand of left-wing thought suggesting that Jews aren’t a legitimate ethnic group, but simply forlorn Asiatic/European nomads who came to exist as a group solely to serve the class interests first of feudal rulers and than of capitalists, possessing neither a legitimate religion (because no religion is legitimate) nor a legitimate culture (because Jews) nor any claim to self-determination.

Indeed, this is sometimes explained in a way that makes anti-Semitism understandable as a reaction to the fact that Gentile rulers use Jews to exploit their subjects. Consider the following recent “open letter” from a group of leftist Jewish Oberlin students:

We agree with the definition of anti-Semitism laid out by Aurora Levins Morales, a Jewish pro-Palestinian activist; she writes that anti-Semitism, writing about European Jewry under Christianity, functions by creating “a vulnerable buffer group that can be bribed with some privileges into managing the exploitation of others, and then, when social pressure builds, be blamed and scapegoated, distracting those at the bottom from the crimes of those at the top.”

Because Jews have no corporate legitimacy unless they are gathering to demand rights for others, it is deemed reactionary to suggest that Jews should have intragroup solidarity. Indeed it has long been a defining attribute of many Jews on the far left to go out of their way to express their disinterest in “Jewish” causes. Consider Rosa Luxemburg’s classic statement: “What do you want with these special Jewish pains? I feel as close to the wretched victims of the rubber plantations in Putamayo and the blacks of Africa with whose bodies the Europeans play ball… I have no special corner in my heart for the [Jewish] ghetto: I am at home in the entire world, where there are clouds and birds and human tears.”

Moreover, it would be reactionary to recognize disproportionate Jews contributions to various fields of endeavor. Good left-wingers, after all, believe that all groups would be exactly equal in every way but for societal oppression Indeed, given that relevant ethos, Jewish success suggests that Jews have somehow gamed the system at the expense of disadvantaged minorities, something that is rather overtly suggested every time a self-proclaimed spokesperson for a minority group suggests that his group must exhibit more solidarity “like the Jews” so they can be successful like the Jews. (Anyone who thinks that intragroup solidarity is a defining aspect of American Jewish culture doesn’t know much about American Jewish culture).

Meanwhile, Jewish support for Israel, or sometimes even for fellow Jews suffering elsewhere, is nothing but reactionary nationalism based on at best foolish sentimentality and at worst racist notions of Jewish superiority. Exactly why Jewish solidarity is racist, but not solidarity among other groups, is never clearly explained, but it seems to have something to do with the fact that Jews aren’t a legitimate ethnic group to begin with.

Once we understand that there are those who believe that the existence of Jews as a recognizable entity, is only justified (and only temporarily) to the extent Jews rely on their residual memories of collective oppression to aid left-wing liberation movements, one can begin to understand the far left’s problem with the Jews. Their ideology leaves no room for anything but revulsion with Zionism, dismissal of claims of anti-Semitism (in ways they would never dismiss accusations of other forms of racism), nor for considering the Holocaust to have any more significance than as an unfortunate example of “white on white crime.”

In short, to many on the far left, the only good Jew is a secular left-wing internationalist political activist with no particular interest in the well-being of his fellow Jews. (Consider again the Oberlin students: “We urge all Jewish students concerned about anti-Semitism to fight with equal passion for Palestinian liberation, Black liberation, and an end to all forms of oppression, on and off campus.” Others, but not Jews, are permitted to be especially concerned with the fate of their own group.) Given that only a small fraction of Jews fit that model, anti-Semitism is therefore a natural consequence.

Jews have a specific heritage worth celebrating. It would have been proper if the White House had recognized it, no matter what the far Left thinks. 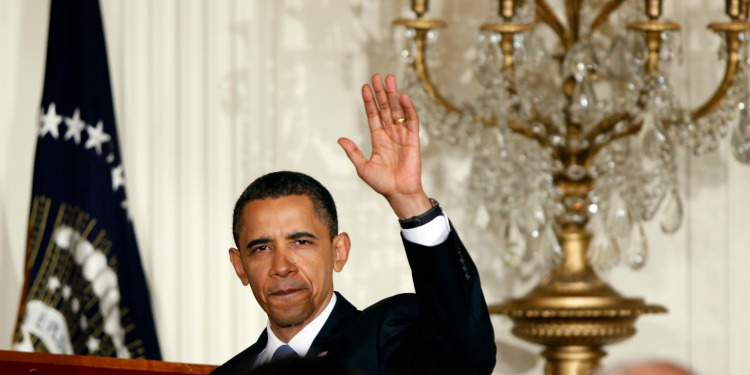