Last weekend’s demonstrations in Gaza produced smaller crowds and fewer casualties than the protests that occurred over the previous two weekends. What’s more, they were overshadowed by the Western airstrikes on Syria. But earlier and more chaotic demonstrations prompted all the usual suspects (Europe, the UN, and “human rights” organizations) to accuse Israel of using disproportionate, indiscriminate force, and shooting “unarmed civilian demonstrators,” all while dismissing Israel’s insistence that it only targeted terrorists, mainly Hamas members, who were using the demonstrators for cover. Yet it now turns out that one Palestinian organization agrees with Israel–Hamas itself.

In a column published in Haaretz last week, Gaza native Muhammad Shehada defended the demonstrations as a necessary response to Israel’s partial blockade, on which he blamed all of Gaza’s woes. His younger brother, he said, has participated in them almost daily. He himself is currently studying in Sweden but formerly worked for an anti-Israel “human rights” organization in Gaza. In short, he’s hardly an Israeli shill. Nevertheless, he noted that even Hamas believes Israel’s fire has been far from indiscriminate:

Despite the seemingly arbitrary live-fire and tear gas raining down on the protestors … Hamas believes the victims are carefully selected. “Israel knows who to wound, maim or kill,” a Hamas leader told me by phone. At least 10 young men, affiliated with Hamas and its Qassam brigades, have been shot while maintaining order at the protest.

Hamas believes Israel is deploying facial recognition technologies besides the numerous war-drones that obliterate the sky above. The movement warned its members to keep their faces covered, and leave their phones at home.

This is what Israel has said all along. A report published last week by the Meir Amit Intelligence and Terrorism Information Center (an organization founded by former Israeli intelligence officials that maintain close ties with the intelligence agencies) concluded that 80 percent of the people killed during the Gaza demonstrations–26 out of 32–were members of terrorist organizations. This conclusion wasn’t based on any secret intelligence; in each case, a terrorist organization publicly claimed the deceased as a member and buried him in the organization’s flag or published pictures of him in military dress holding a gun. This finding also explains why all but two of the dead were men between the ages of 19 and 45: Unlike the terrorists, actual civilians have largely kept their distance from the border fence.

Of course, Shehada argued that the Hamas men were only present at the demonstrations to ensure that demonstrators didn’t engage in anti-Israel violence or try to cross the border into Israel – the implication being that Israel deliberately tried to provoke Palestinian violence by killing the people working to stop it. And what Shehada merely implied, the demonstrations’ organizers have openly charged: Israel, they say, is intentionally trying to provoke the demonstrators into violence.

To be fair, Hamas does have a record of trying to stop violence in those rare cases where violence doesn’t suit its own agenda. But in this case, it’s hard to argue that efforts to breach the border don’t fit in with its plans, because the organization’s leader in Gaza, Yahya Sinwar, has repeatedly and explicitly declared that this is precisely what the demonstrations are intended to do.

At the March 30 demonstration, Sinwar asserted that the protest “will not stop until we remove this transient border [between Gaza and Israel . . . The protests will continue until the Palestinians return to the lands they were expelled from 70 years ago” – i.e., pre-1967 Israel, the state established 70 years ago. And lest anyone think this was a fluke, he reiterated it at the following week’s demonstration, saying the world should “wait for our great move, when we breach the borders and pray at Al-Aqsa,” Jerusalem’s principal mosque.

Thus, believing that Hamas operatives are at the border to stop it from being breached requires believing that Hamas sent its men there specifically to undermine its own leader’s stated goal. By any ordinary standard of logic, it’s far more likely that they were there to do exactly what Sinwar said he wanted to do: use the demonstrations as cover for vandalizing the border fence and attacking the soldiers guarding it, with the ultimate goal of opening a breach through which thousands of Gazans could pour into Israel.

This is all the more plausible because Hamas used that exact same tactic to breach the Egyptian border 10 years ago. On January 22, 2008, a group of unarmed Hamas demonstrators–mostly women–rushed the Rafah border crossing between Gaza and Egypt and managed to break through. That night, Hamas operatives planted explosives along the border wall in several places, creating huge gaps in it. The next day, anywhere from 200,000 to 750,000 Gazans (estimates vary) poured through those breaches into Egypt.

Needless to say, this conclusion is also supported by the testimony of Israeli soldiers, who have reported numerous incidents of “demonstrators” trying to vandalize the fence or throw Molotov cocktails and improvised explosive devices at soldiers. The latest Palestinian tactic is flying kites with Molotov cocktails attached over the border; those “innocent” kites have so far started four fires in Israel. These are the terrorists, not “innocent civilians,” whom Israeli soldiers have targeted.

Israel and Hamas are in almost perfect agreement over what has been happening over the last few weeks. Both agree that the goal of the demonstrations is to breach the border with Israel, and both agree that Israeli gunfire during these demonstrations has been aimed almost exclusively at operatives for Hamas and other terrorist organizations.

The only people who don’t agree with this description are European, UN, and NGO officials sitting in their comfortable offices in Brussels and New York. At best, they’re guilty of monstrous arrogance in believing that they know what’s happening on another continent better than the parties actually on the ground. And at worst, they simply don’t care what really happened–because in those circles, the politically correct anti-Israel narrative almost always trumps the facts. 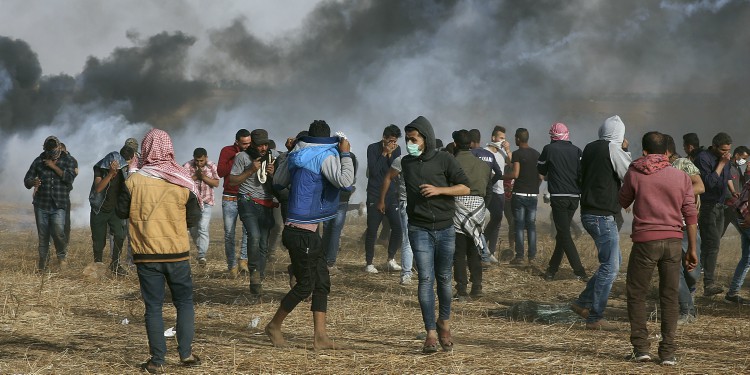