During the Hamas-Israel war of 2014, both Obama Administration officials and their European counterparts repeatedly accused Israel of excessive force over the “massive” destruction of civilian property in Gaza. But if those officials retain even a shred of intellectual integrity, the recent devastation of Ramadi during a joint Western/Iraqi effort to retake the city leaves them only two options: either hand themselves over to the International Criminal Court as suspected war criminals, or publicly apologize to Israel for all the slurs they hurled at it over far less extensive damage.

As the New York Times reported last week, the successful recapture of Ramadi from the Islamic State left the city “in ruins.” Reporter Ben Hubbard described one neighborhood as “a panorama of wreckage so vast that it was unclear where the original buildings had stood.” The city has no electricity or running water, and “Many streets had been erased or remained covered in rubble or blocked by trenches used in the fighting.” When Hubbard asked an Iraqi officer how residents would return to their homes, the officer replied, “Homes? There are no homes.”

Indeed, a different Iraqi officer told the Associated Press “that more than half of the city’s buildings have been destroyed, including government offices, markets, and houses.”

This is devastation orders of magnitude greater than what Gaza suffered. According to UN figures, 9,465 homes in Gaza were completely destroyed and another 9,644 badly damaged, out of a total of roughly 319,000 (the latter figure is my own calculation based on  official Palestinian statistics: Dividing Gaza’s total population of 1.82 million by its average household size of 5.7 people gives you 319,000 households). Thus even according to the UN – which traditionally exaggerates Palestinian casualties and damage – only about 6 percent of Gaza’s homes were destroyed or badly damaged. That’s a far cry from “more than half of the city” in Ramadi.

But the reasons for the destruction, in both places, are no less significant than its scope. One, as Hubbard noted, is the inherent difficulty “of dislodging a group that stitches itself into the urban fabric of communities it seizes by occupying homes, digging tunnels, and laying extensive explosives.” In Ramadi, he reported, Islamic State built tunnels under the streets and planted explosives in roads and buildings. Indeed, “Entire areas are considered no-go zones because they have yet to be searched for booby traps left by the jihadists.”

These are the same tactics Hamas used in Gaza: Tunnels, booby traps, and weapons stockpiles were placed in and under civilian buildings on a massive scale. On July 30, 2014, for instance, three Israeli soldiers were killed by “an explosion at a booby-trapped UNRWA health clinic that housed a tunnel entry shaft,” the Times of Israel reported. At the same press briefing where those deaths were announced, an Israeli officer said Hamas had thus far detonated more than 1,000 bombs, destroying “thousands of buildings” in Gaza. As an example, he cited a street the army searched the previous night in which 19 out of 28 buildings were booby-trapped.

But in Gaza, both the Obama administration and European officials blamed Israel for the ensuing destruction. In Ramadi, in contrast, both American and Iraqi officials quite sensibly “placed blame for the city’s destruction on the jihadists, who mined roads and buildings.”

The other factor in Ramadi’s devastation was airstrikes by the U.S.-led coalition. As AP reported, these strikes “smashed large parts of the city into rubble.” Nor is that surprising: When a target area is extensively booby-trapped, even precision airstrikes often cause greater-than-expected damage, because the attacking force can’t know which buildings are wired with explosives, and hitting a wired building will set off massive secondary explosions. Yet airstrikes are unavoidable when fighting militants entrenched in a sea of tunnels and booby-trapped buildings, because using ground troops alone would result in unacceptably high losses for the attacking force.

Consequently, a Pentagon spokesman correctly blamed Islamic State (also known as ISIS or ISIL) for the damage to Ramadi: “One hundred percent of this is on ISIL because no one would be dropping any bombs if ISIL hadn’t gone in there,” Colonel Steven H. Warren told Hubbard.

Yet in Gaza, both the Obama Administration and European officials largely blamed the damage on Israel rather than Hamas, even though Israeli airstrikes were employed for the exact same reason, sometimes caused greater-than-expected damage for the exact same reason, and obviously wouldn’t have been launched at all had Hamas not attacked Israel to begin with. Indeed, Israel’s airstrikes were arguably far more justified than America’s were: Islamic State wasn’t firing missiles at America from Ramadi or digging attack tunnels into American territory from Ramadi. In contrast, Hamas had fired thousands of rockets at Israel from Gaza over the previous decade and dug dozens of cross-border attack tunnels, including one that notoriously emerged right next to a kindergarten.

Ramadi, incidentally, is far from the only example of the way the Obama Administration and Europe hold Israel to a double standard. On Monday, the Elder of Ziyon blog highlighted another one: According to the Herald Scotland, “The British government is refusing to accept evidence of civilian fatalities in UK air strikes from human rights groups monitoring the results of bombing raids” in Syria and Iraq; instead, it relies exclusively on “evidence from its own internal surveillance.” But that same government uncritically accepted NGO reports saying that almost 70 percent of Palestinian casualties in Gaza were civilian, even though Israel scrupulously investigated those reports and found that in reality, about half the casualties were documented members of either Hamas’ military wing or smaller terrorist organizations like Islamic Jihad.

I don’t really expect any Obama Administration or European official to admit to having unjustly criticized Israel during the Gaza war. But any fair-minded person comparing the devastation of Ramadi to that in Gaza should reach the same conclusion a group of high-ranking Western military experts did in a comprehensive report issued last month: that during the Gaza war, Israel “met and in some respects exceeded the highest standards we set for our own nations’ militaries.” 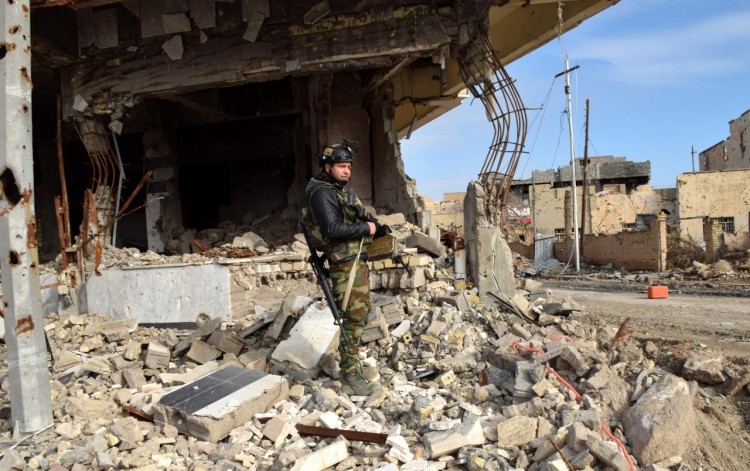