The Israel-Turkey reconciliation agreement announced this week is an object lesson in the importance of being willing to walk away from negotiations. For six years, the Israeli chattering classes and the international community urged Israel to simply accept Turkey’s terms, arguing that Ankara wasn’t going to soften its demands and that Israel desperately needed good relations with Turkey, whatever the price. But it turns out neither part of that argument was true: Turkey proved to need Israel far more than Israel needed it, and consequently, it eventually reduced its demands significantly. The current deal is thus much better than what Israel would have gotten had it caved in and signed earlier.

The biggest change is that Turkey capitulated completely on its longstanding demand for an end to the Gaza blockade, which would have badly undermined Israel’s security. Under the current deal, all restrictions meant to prevent Hamas-run Gaza from importing arms and exporting terror remain in place: The naval blockade will continue; imports to Gaza will still enter through Israel and undergo Israeli security checks, and movement restrictions aimed at preventing Gazan terrorists from entering either Israel or the West Bank will remain in force. Instead, Turkey will bolster its self-image as Gaza’s champion by building a power plant, hospital, and desalination facility–all badly needed humanitarian projects that Israel has long wished someone would undertake. It will also be allowed to send unlimited humanitarian aid through Israel’s Ashdod Port–a meaningless concession since Israel never restricted humanitarian aid shipments.

Another important change relates to Hamas operations in Turkey, where Hamas’s West Bank command–responsible for planning anti-Israel attacks from the West Bank–has long been headquartered. Ankara insisted for years that the reconciliation deal should include no provisions affecting its relations with Hamas. But the current deal requires it to end all Hamas military activity on its territory.

This falls short of Israel’s demand that it expel Hamas entirely; the Islamist organization will still be able to engage in diplomacy and fund-raising in Turkey. But if Israel refused to have relations with any country that let terrorist groups engage in diplomacy and fund-raising on its territory, it would also have to sever ties with the European Union, where the political wing of Hezbollah–a far more dangerous group than Hamas–is allowed to operate freely in all but a handful of countries. In other words, this is an acceptable compromise that genuinely improves the existing situation.

The third major provision requires Israel to pay $20 million in compensation to the families of Turks killed or wounded during Israel’s raid on a Turkish-sponsored flotilla to Gaza in May 2010. That provision offends many Israelis because it essentially rewards anti-Israel violence: No other Israeli interception of a ship to Gaza has produced casualties, and the only reason this one did is that the passengers, unlike passengers on other such flotillas, viciously attacked Israeli soldiers “with iron bars, staves, chains, and slingshots, and there is some indication that they also used knives.”

Nevertheless, this money would probably have to be paid at some point anyway, because the families have filed lawsuits against Israel both in Turkey and overseas. This way, the sum is at least capped: Before receiving this money, Turkey will have to pass legislation voiding all existing lawsuits, and has also promised to indemnify Israel for any future suits.

Turkey could have gotten these same terms six years ago, but it thought it could force Israel into conceding more. Had Israel’s chattering classes had their way, Ankara would have been right. But all the warnings of dire consequences if Israel refused to capitulate proved false.

The prophets of doom warned of economic consequences since Turkey is a major trading partner; in reality, bilateral trade has more than doubled over the past five years despite the diplomatic freeze. They also warned of diplomatic consequences, pointing out that Turkey had long served as Israel’s intermediary to the Muslim world. Instead, Israel is enjoying an unprecedented thaw in relations with key Arab states. Reports of behind-the-scenes contacts with Saudi Arabia and the Gulf States have proliferated, and relations with Egypt, its most important Arab partner, have never been better. In fact, Israel currently has much better relations with Egypt than Turkey does.

But while Israel has done just fine during its diplomatic freeze with Ankara, Turkey has done less well. Half its former Arab partners are collapsing (i.e. Syria, Libya) and it has been flooded with refugees as a result; it has wrecked relations with other former partners (i.e. Egypt, Russia) with its own two hands; and the situation in its Kurdish regions is fast approaching civil war. All this drove Ankara to the reluctant conclusion that it couldn’t afford to remain at odds with one of the Mideast’s few remaining stable polities–one, moreover, that offers it many benefits; from providing a land bridge for exports to the Arab world in place of the now-unfeasible Syria route to potentially selling it natural gas that would reduce its dependence on Russia. Therefore, it swallowed its pride and reduced its demands to ones that Israel could meet without undermining its own security.

I’ve explained at length before why Israel can and should wait until the Palestinians are prepared to strike a reasonable compromise. The Turkish deal is simply further evidence that this strategy can work. 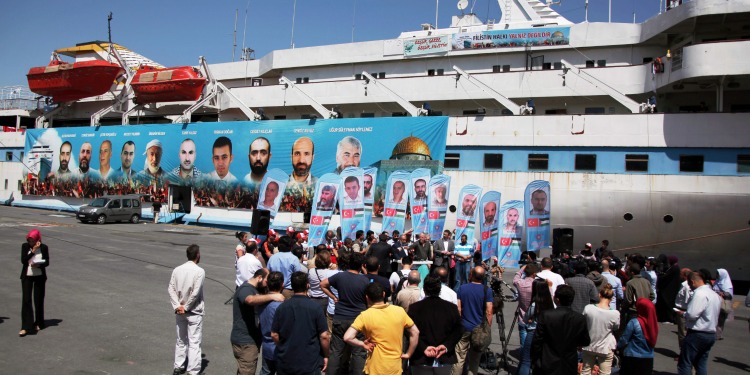