The Los Angeles Times published an eye-popping report this week: According to Kadoura Fares, head of the Palestinian Prisoners’ Club, roughly one-fifth of all Palestinian attacks on Israelis in recent months have been attempts to commit “suicide by cop.” Even if that estimate were exaggerated, Israeli security officials concur that there have been many such cases, which begs an obvious question: Given that suicides are usually interested mainly in killing themselves, why do so many suicidal Palestinians try to kill others in the process? And Fares is quite upfront about the answer: “In our culture, suicide for no reason isn’t honorable,” he said. “If they try to confront a soldier, however, it’s looked on with more respect.’’

Or to put it more bluntly, Palestinians have created a culture where mass murder is the quickest, easiest and surest path to glory. What distressed Palestinians are told by their society is roughly the following: “Do you feel like a failure? No problem. All you have to do is murder a Jew, and you’ll be an instant hero. You’ll be lionized on radio and television programs; schools and soccer tournaments will be named after you; politicians will sing your praises. And as a bonus, you’ll also earn the respect that goes with being a breadwinner: If you live, the government will pay you an above-market salary while you’re in prison, and if you die, it will pay your family.” For a distraught youngster, such a prospect of instant redemption is enormously tempting.

This, clearly, is a form of society-wide child abuse: Instead of being encouraged to seek help, distressed young people are encouraged to commit murder, thereby ensuring they will either be killed by security personnel or sentenced to years in jail. That this practice is ignored by all the myriad “human rights” groups active in the West Bank is ample proof that they care as little about Palestinians’ human rights as they do about those of Israelis.

But contrary to the LA Times’ headline writer, who titled the article “Politics isn’t the only motive driving Palestinian knife attacks on Israeli soldiers,” the fact that so many would-be suicides try to attack Israelis is all about politics–not the assailants’ politics, but those of their society. For in Palestinian society, murdering Jews is the height of political achievement. And you needn’t take my word for it; just look at the Fatah party’s election campaign for October’s planned municipal vote.

Last week, Fatah’s official Facebook page proudly sported a list of the party’s achievements. The very first on the list was “Fatah has killed 11,000 Israelis.” And what about numbers two, three, and four? In order, Fatah “has sacrificed 170,000 martyrs” (the Palestinian term for people killed attacking Israelis); it “was the first to carry out operations [i.e., terror attacks] during the first Intifada”; and “it was the first to fight in the second Intifada,” the brutal terrorist onslaught that killed more Israelis in four years than all the Palestinian terror attacks of the previous 53 years combined. In fact, there’s only one nonviolent “achievement” on the list, and even that relates to anti-Israel activity: “Fatah led the Palestinian attack on Israel in the UN.”

Elsewhere in the world, governing parties seeking reelection usually highlight their efforts to improve people’s lives–for instance, job creation, new infrastructure or anti-poverty measures. But no such measure appeared on Fatah’s list of achievements, even though it has run the Palestinian Authority for the last 22 years. Granted, it might be hard-pressed to find any such achievements to boast of even if it wanted to, but that’s precisely because it has consistently prioritized hurting Israel over helping its own people.

And lest anyone has forgotten, Fatah is the “moderate” Palestinian party–the one led by PA President Mahmoud Abbas, Israel’s ostensible peace partner. Hamas, as I’ve pointed out before, is at least equally bloodthirsty.

This, of course, is the main reason why more than two decades of “peace processing” have yet to produce peace. It’s hard to make peace when one side exalts killing the other as the highest possible good. Yet the West has consistently turned a blind eye to this problem rather than confronting it, preferring instead to pretend that peace would break out tomorrow if Israel would just make more concessions. And many Westerners even actively enable this abusive death cult by blaming not the Palestinian leaders who incite troubled youth to kill both themselves and others, but Israel, on the dubious theory that it must somehow be guilty if so many Palestinians want to attack it (if that doesn’t sound dubious to you, just try saying that women must be guilty because so many men want to rape them).

Neither Israeli-Palestinian peace nor a better life for Palestinians will ever be achievable as long as this culture of death continues to dominate mainstream Palestinian politics. This is a change Palestinians will ultimately have to make for themselves, but the West could help it along if it finally stopped playing enabler.

The latest report by the Middle East Quartet (the U.S., EU, UN, and Russia) took a positive first step; it did at least acknowledge that Palestinian incitement to terror is a problem. But until Western countries start condemning this behavior clearly and consistently, and actively penalizing it, rather than aiming most of their fire at Israel, Palestinians will have every reason to conclude that their death cult is working beautifully. For in a political system that deems harming Israel to be the highest good, any policy that encourages the West to turn against the Jewish state is a success, no matter how many young Palestinians have to die in the process. 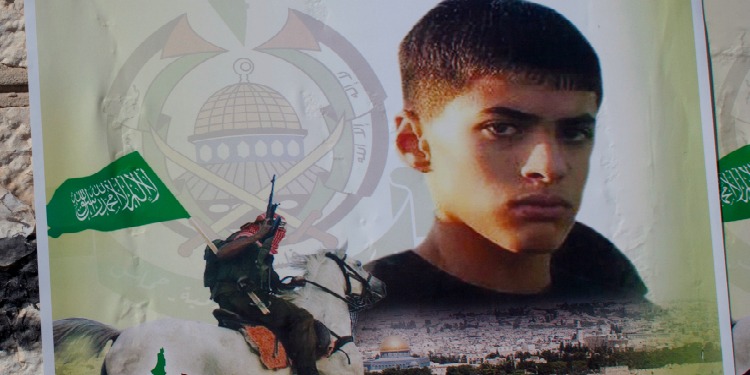