If you want to understand why no rational person should take the United Nations seriously, consider the following three facts: Last week, the World Health Organization, a UN agency, named Israel the first country in the world to be awarded its highest ranking for medical emergency response teams deployed overseas. In other words, the organization deemed the Israel Defense Forces its first responder of choice for any disaster worldwide. Two weeks ago, the daily Israel Hayom reported that the UN’s peacekeeping service asked Israel to train its peacekeepers in emergency field medicine; the seminar is expected to take place in the coming weeks. And every year, this same UN labels Israel the world’s worst violator of health rights, the only country deserving of a country-specific condemnation.

So if you take all three of those decisions seriously, you’re forced to conclude that the UN thinks the world’s worst violator of health rights is the ideal choice to be first on the scene in any medical disaster worldwide and also to train the UN’s own peacekeepers. The UN, by an overwhelming majority, regularly passes resolutions that even its own professional staff knows to be nonsense. Its latest condemnation of Israel for ostensibly violating health rights, for instance, passed in May by a vote of 107-8 with eight abstentions.

And lest anyone thinks there might be some way to square this circle, no, the contradiction can’t be resolved by assuming that Israel’s disaster relief efforts are somehow divorced from its regular medical practices. Over the past few years, for instance, thousands of Syrians wounded in that country’s civil war have willingly come to the Golan Heights and handed themselves over to an enemy army (Israel and Syria are still officially at war) in order to obtain medical care from Israel that they can’t obtain elsewhere. That’s the same Golan Heights where, according to the resolution, Israel is regularly violating Syrians’ health rights.

Similarly, West Bank Palestinians have higher life expectancy and lower infant mortality than Mideast neighbors like Egypt and Jordan or even OECD member Turkey, due in part to their access to Israeli hospitals. That’s the same West Bank where, according to the resolution, Israel is regularly violating Palestinians’ health rights.

One might argue, looking at the decisions cited in the first paragraph, that the UN’s periodic passage of delusional anti-Israel resolutions doesn’t really matter. After all, its annual condemnations of Israel’s medical practices didn’t stop either WHO or the peacekeeping service from recognizing that Israel actually shines in this field and seeking to benefit from its expertise.

The problem is that those decisions are a rare exception to the norm. Far more often, the UN’s non-reality-based resolutions actually serve as the basis of international policy.

Consider, for instance, the UN’s 2012 vote to recognize “Palestine” as a nonmember observer state, even though it didn’t meet the basic requirements of statehood set out in the 1933 Montevideo Convention. That convention requires states to have an actual government. “Palestine” has two, the Palestinian Authority in the West Bank and Hamas in Gaza, with the result that its ostensible president can’t even enter the latter territory and his writ doesn’t run there.

While it’s still unclear how this acceptance will affect the ICC, its effect on UNESCO has been devastating. Not only did it result in the loss of U.S. funding–a full 22 percent of the agency’s budget–but the Palestinians’ nonstop submission of resolutions denying historical fact in Jerusalem has become so embarrassing that even UNESCO’s director publicly repudiated the latest one.

Back in 2002, responding to worldwide criticism of the IDF’s efforts to stop a murderous wave of Palestinian suicide bombings, UN Secretary-General Kofi Annan famously asked, “Can Israel be right and the whole world wrong?” It turns out even the UN recognizes that the answer to this question is “yes.” After all, two UN agencies just conferred accolades on Israel’s medical conduct despite the UN’s own 107-8 vote lambasting that same conduct.

But that’s precisely why Israel has refused ever since its establishment to take UN resolutions seriously: No sane country would agree to determine its policies based on the demands of an organization so often disconnected from reality. Indeed, the only sensible conclusion that can be drawn from the UN’s schizophrenia toward Israel is that the organization is in desperate need of comprehensive reform to cure its own illness. 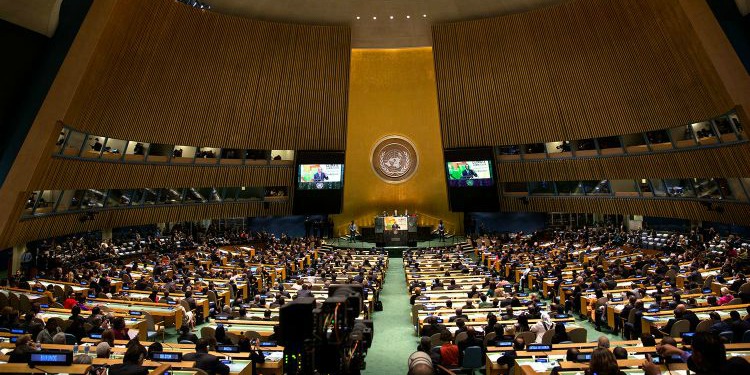