In 2000, you knew it was over for John McCain in his bloody nomination battle against George W. Bush when he declared self-righteously he didn’t “want to win in the worst way.” Similarly, the Republican nomination for the presidency may have effectively ended this morning when Marco Rubio announced on the Today show he wouldn’t go on the attack against Donald Trump but would only “correct the record.” He continued to make the case that he is the most electable Republican and that a large majority of Republicans don’t want Trump to be the nominee.

Neither case makes itself, but that is what Rubio has apparently now come to believe.

There’s a “craving in the media” for attacks on Trump, Rubio claimed, and he isn’t in the race to attack other Republicans. It’s possible a little of that criticism might be aimed in my direction, so let me make the case for this “craving.” It’s not a media craving. Republicans who are horrified at the prospect of a Trump presidency actually need a champion. Rubio and Ted Cruz seem to think they can ride an anti-Trump wave, but unless they are the ones both to stir up the waters and ride the wake, there isn’t going to be one. The anti-Trump party needs someone to voice its case — and to do so as systematically as Rubio can list to you the 14 leading radical Islamic groups around the world or big-time debater Cruz can remember what 11 points you last made and rebut them one by one. Just like Trumpkins like him because he stands up to “the Establishment,” those who want Trump defeated want someone who will stand up to Trump. And those who are made uneasy by him but are sliding toward him must be reminded of the reasons for their unease to halt the slide.

This is sheer self-preservation where Rubio and Cruz are concerned. The case that Republicans don’t want Trump crumbles away with every passing day. Yesterday, 46 percent of Nevada’s caucusing Republicans announced they do want Trump to be the nominee. Now, that’s not a state party I’d want deciding much of anything — it’s the party whose choice of the horrific Sharron Angle in the 2010 Senate race ensured the return to Washington of Harry Reid, and did you see the disaster the caucus was last night? — but the result is indicative of what may be the only iron rule of politics, which is that winning begets winning.

And as for the case that what either one needs is for the other to drop out, and therefore that there is Machiavellian wisdom in Messrs. Two and Three going after each other rather than Mr. One, please note that if either Rubio or Cruz had left the race yesterday and every single one of his votes went to the other, Trump would still have been victorious.

The thing is, it doesn’t matter that Rubio had this strategy or Cruz had that strategy. Everybody loves his game plan, but at some point clinging to it is either a species of vanity — that was McCain’s fatal problem in 2000, how he had convinced himself he was the candidate of virtue — or desperation, or a complete lack of vision. There are 12 primaries/caucuses on Tuesday night and Trump is leading in all but one of them. If he runs the table, this is the end for these guys. Oh, they can stay in and play for delegates and be the savior if Trump does something so horrific the later states will turn on him. But that’s not strategy; that’s hope.

Choose to lead the non-Trump party. Otherwise, when Trump sends out a tweet calling you “sad” or “a baby,” there’ll be some merit to it. 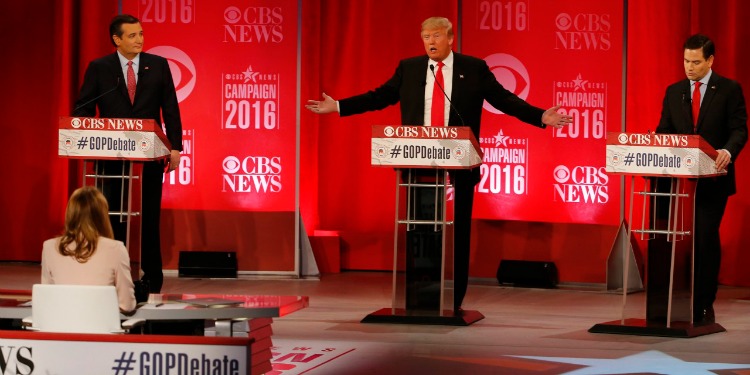