In retrospect, perhaps, it seems crazy that a year ago everybody thought this was going to be a relatively conventional election. But we all did.

The Democrats were going to coronate Hillary, and with good reason, given her universal popularity within her party, her fundraising prowess, and her reasonable claim to being the most prepared Democrat to take over the presidency. Meanwhile, the Republicans were swimming in clover, with an embarrassment of riches when it came to candidates. The best, the most impressive field ever! Prepping runs were the governors of Ohio, Wisconsin, New Jersey, and Louisiana — all two-termers from purple states. Add to them the wildly successful former governors of Texas and Florida. Then throw in the two most intellectually impressive young senators in the party, one from Florida and the other from Texas. The problem was going to be how on earth to pick just one when they all had such potential.

Now here we are. Hillary Clinton is on the verge of losing the first two states to a septuagenarian Jewish socialist back-bencher who honeymooned in the Soviet Union, with consequences for the future that aren’t yet clear. The structure of the Democratic Party’s nominating process, which gives enormous power to elected official “superdelegates,” would seem to ensure she can’t be denied the nomination, but stranger things have happened. The question is, why has this strange thing with Bernie Sanders happened already? (And I’m not even talking about the dozens of FBI agents on her trail.)

And, of course, most of those wonderful Republican candidates have been washed away by the Donald Trump flood. He is everything they’re not — he’s unprepared, has no knowledge, has no electoral polish, has no experience in constructing a base of support, and has no evident “strategy.” He is what he was when he came into this race: An anti-politician. An anti-candidate. A rich guy TV star whose basic message is that everybody but he and some of his friends is an idiot, that the country is being run by morons and losers, and that most of our problems are attributable to hostile outside forces — Mexicans crossing our borders with the collusive enthusiasm of their political leaders, Chinese officials who are screwing us, and Muslims who are killing us. No one in power is doing anything about these problems, and he will. How? He will. He says he will. And if you say he won’t, you’re low-energy or you’re doing badly in the polls or you’re The Manitoban Candidate.

I was, and many of us were, blinded by Trump’s vulgarity, ugliness, and demagoguery to the signal reason he has clearly gotten the upper hand in the American political game today — which I think also helps explain how Hillary has found herself blindsided yet again by a Democratic voice coming from her left who seems to have a more compelling message than she.

The preferred explanation for which Trump and Sanders pose as the solution is that politics has failed to work effectively, it’s broken, and someone needs to come in and fix it. That view misses the scope of the problems these two candidates are actually addressing.

Put simply, nobody in American elite life — not in politics, not in finance, not in the intellectual world — has been able to find a convincing explanation for the transformative negative changes that characterize our time. These changes are spiritually and possibly literally earth-shattering. The family is falling apart and being redefined at the same time. Incomes have stagnated. Small stateless actors with global reach due to the Internet threaten the disruption and destruction of everyday life in places major (Paris) and minor (San Bernardino). And for many the ethnic complexion of America is changing in ways it has never changed before.

After the economic meltdown, Barack Obama acted boldly. He sought to fix the economy with a $1 trillion stimulus that did almost nothing. He promised to expand health-care and shrink its cost at the same time, a ludicrous and illogical promise that properly resulted in the kind of nihilistic cynicism he supposedly was elected to overcome. Meanwhile, the diagnoses of the Right proved ineffectual as well. Republicans and conservatives, using classic economic theory, warned of catastrophic inflation from the Fed’s QE money expansion — but rather than inflation, we seemed to get deflation. Voters divided government sharply in order to prevent the kind of agglomeration of power that gave Obama his free hand in 2009 and 2010, and what has resulted from that is enraged dissatisfaction from the political classes with the paralysis that was, in fact, the specific goal of the electorate.

So along come Trump and Sanders, and what do they say? They both say the system doesn’t work. Trump says it’s because losers are in charge and that the goal needs to be “winning.” Sanders says the system is rigged, billionaires run everything and must be stripped of their power (and money), and bankers must be sent to jail by the dozens if not hundreds. Note that the key to understanding these appeals is that they are really not all that partisan. Trump doesn’t say Obama is to blame, though he says Obama is a “disaster” — but then, so was Bush in his estimation. Sanders doesn’t really say the problem is recalcitrant Republicans but rather the behavior of a superclass of people who stand above politics and manipulate it like puppeteers manipulate marionettes.

Their meta-message is this: The problems are bigger than the ideological choices of the guy in the White House or the sclerosis of the Senate. They are systemic — not politically systemic, but civilizationally systemic. Trump said in the last debate that he was content to be “a vessel for anger.” Sanders yells a lot in debate, thus signaling anger.

But this goes beyond anger. They are, in effect, saying, “We better do some extremely large things fast or this country is finished.” And finished fast. Like now. Like by 2020.

This is not the kind of rhetoric conventional politicians use. They generally do not want to over-promise so they do not over-diagnose. They may say we’re in crisis but in mood and spirit and in the substance of their proposals, they draw within the conventional lines. Trump and (to a lesser degree) Sanders are screaming “Apocalypse Now.” The next two months will be the real test of whether Americans believe we are, at this very moment, at the American tipping point. 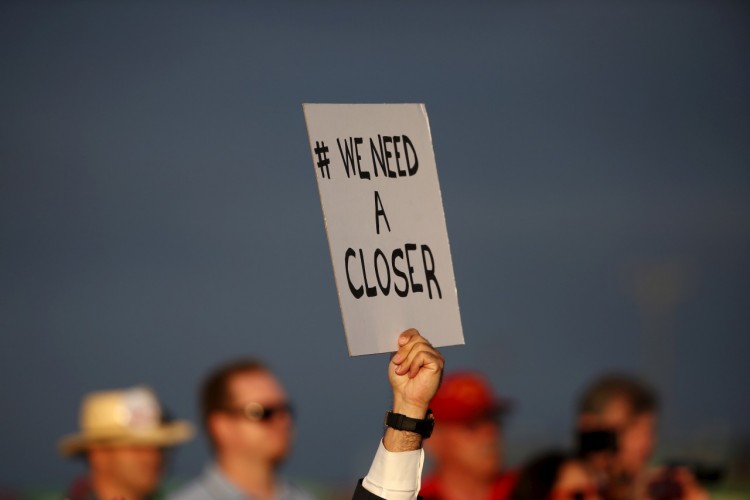