Responsible thinkers, pundits, and reasonable people everywhere are up in arms about Donald Trump’s effort to invalidate the November 8 results before the fact with the charge that the election is rigged. From Matt K. Lewis and our own Max Boot among conservatives to Brian Stelter among mainstream media types to Chris Hayes of MSNBC on the Left; there is unity in the idea that Trump has somehow crossed a Rubicon that threatens our democracy like nothing he has said before.

It cannot be true, they say, since the manner and conduct elections are almost exclusively a state-level responsibility, and the conspiracy it would take to rig a nationwide contest would be ridiculously vast and broad. More philosophically, they argue the working order of our democratic republic requires of our leaders (and Trump is one) that they agree to the social compact that sets us apart from other nations—the one that says power passes peacefully during political transitions and, therefore, that the defeated party in an election acknowledge the defeat and the victory of the other side publicly in order to ensure we do not devolve into warring political mobs.

It’s wonderful to hear this kind of public civics lesson, and I hope everybody listens, but it’s entirely beside the point. Trump contradicts himself and says two different things in the same sentence and is an enemy to coherence except in this way: This rigging argument is the beating heart of his candidacy and has been since he began it. Of course he says the election is rigged. His entire narrative about the condition of the United States is that the system is rigged. The trade deals are rigged. The tax system is rigged. The media are rigged. The justice system is rigged. “There’s something going on here, folks,” is a mantra he’s used in his rallies for 16 months now.

His chief political consigliere was and likely is Roger Stone, a brilliant operative—and hyper-conspiratorialist. The dominating theory of conspiratorialists is that everything is rigged—that’s what conspiracies are, after all. The JFK assassination was rigged. The Warren Commission was rigged. Flight 800 was rigged. Fire can’t melt steel. The crack epidemic was an inside CIA job.

If you think about it, the birther claim against President Obama and its associated offshoots are a sinister retelling of the past 55 years of American history. It is a story in which large-scale forces we don’t understand conspire to take a half-African/half-white kid born in Kenya, make him wholly American, work the system so he can get into Columbia University from Occidental, pay his bills there and at Harvard Law School, ghost-write his memoir, buy him a house, release the sealed custody records of his senatorial rival, and then secure him the presidency. Rigged! The biggest rigging of them all! The fact that if you wanted a Manchurian candidate, baby Barry Obama would have been the least likely choice anyone would ever have made in 1961 is beside the point. Clearly, some visionary or time traveler who knew the time would be ripe in 2008.

Think about how this argument was assembled out of fragments and pieces and bits and you can get a sense of how the conspiratorialist “rigged” mindset works. None of it makes sense individually, and taken as a whole it’s the province of bad suspense fiction, but put it together and it resembles a pointillist painting of America as seen from the perspective of a malign Grand Engineer.

The ultimate point of all this is the control of the levers of political power, so of course the way the votes are cast is rigged as well. But this part of the argument, I’m afraid, has been the primary province not of the Right until recently but the Left. The Florida recount in 2000 was rigged. The 2004 vote was manipulated by Diebold machines, and the state of Ohio closed polling places abnormally early to ensure a Bush victory over John Kerry (this was a particular bugaboo of Christopher Hitchens, whose tragically early death obscured his frequent descent into the fever swamps). And what else is the assertion of “voter suppression” in response to voter-ID laws but an implicit charge of vote-rigging against anyone and everyone who seeks such legislation?

Just as Trump is attempting (likely not consciously on his part but likely consciously on Stone’s part) to reassemble the political landscape beyond the current boundaries of Left and Right, so, too, is he happy to become the tribune of the notion that if everything is rigged against his voters, everything is rigged against him as well. So, of course, they are going to steal the election. It’s what they do. They are more powerful than all other forces arrayed against them. This is bigger than one election. This is now the entire world structure Trump is taking on. That’s why he’s broadened his attack on the rigged system to international bankers and forces beyond our borders seeking to ensure a Hillary victory—because how on earth can he and his forgotten voters prevail against such amassed and naked power?

If Trump loses, the point he and his toadies will make is that he lost this whole thing even before he began. The marionetteers are pulling the strings, and the people must rise up to take on the puppet masters. Which means, if I’m right, he’s not going anywhere, and his assault on the nation’s social and political compact has only just begun. 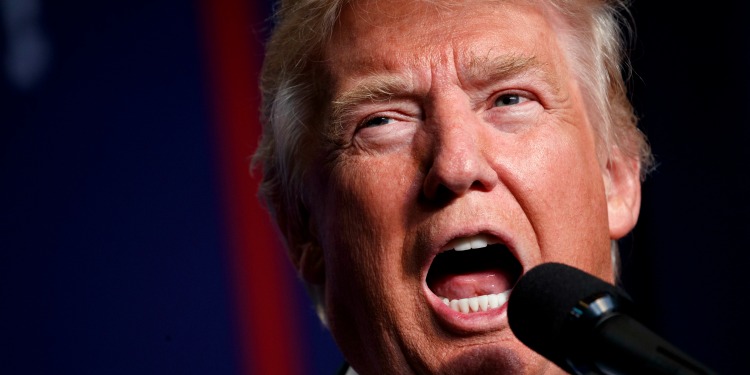