You can choose to have whatever opinion you have on the president’s statement today condemning white supremacists, but it’s hard to believe he would have read it out if he’d had his druthers. No, the real Donald Trump was the one we saw on Saturday when he decided to condemn violence “on many sides” in response to the deliberately provocative and intentionally violent neo-Nazi march in Charlottesville, Virginia; when he decided to refer to the events as “sad” in tweets; when he wished “best regards” to those injured by the car that was deliberately smashed into them, killing 1 and injuring 20. When he acted in that way, he was operating according to his instinct. And his instinct said:  Do not attack the white supremacists.

Why? The answer, I think, has everything to do with how he became president. Let me lay it out for you.

One of the mysteries of Trump’s rise in 2015 was just how meteoric it was. A week after he declared for president he came in second place in a Suffolk University poll in New Hampshire with 11 percent; 29 days after he came down the escalator, he was in the lead in the Suffolk poll nationally. He never surrendered that lead. How did Trump happen so fast?

The usual explanation is that he was just so famous and people didn’t realize how famous he was, how potent his brand would be. Sure. But that explanation is insufficient because Kim Kardashian is famous in a similar way and I doubt she would have led in a Democratic Party poll in 2015. The question is, whose early support for Trump itself played a key role in leading others to take him seriously and help propel him into the nomination?

The answer to this question is one Trump himself knows, I think. If there’s one thing politicians can feel in their marrow, even a non-pol pol like Trump, it’s who is in their base and what it is that binds the base to them. Only in this case, I’m not talking about a base as it’s commonly understood—the wellspring of a politician’s mass support. I’m talking about a nucleus—the very heart of a base, the root of the root of support. Trump found himself with 14 percent support in a month. Those early supporters had been primed to rally to him for a long time.

I’m talking about Alex Jones and Infowars, the conspiracy-theory radio-show/website on which Trump has appeared for years; the radio show has 2 million listeners a week, and Jones was said in 2011 to have a larger online presence than Rush Limbaugh or Glenn Beck. I’m talking about the WWE, which televises wrestling and which, in 2014, could claim a weekly audience of 15 million and on whose programs Trump intermittently served as a kind of Special Guest Villain in the manner of a villain on the 1960s Batman show. I’m talking about American Media, the company that owns the National Enquirer, the Star, the Sun, and the Weekly World News run by Trump’s close friend David Pecker; the combined weekly circulation of its publications is well in excess of 2 million. Trump helped make the birther issue a major one for a month in 2011 by talking about it on “Meet the Press” and “Good Morning America,” on network television. But he was surfacing an issue that had been roiling in the proletarian media, stirred and shaken constantly by his political guru, Roger Stone.

We’ve heard ad nauseam about Trump’s symbiotic relation to the New York City tabloids in the late 1980s and early 1990s, but in point of fact, that relationship declined sharply as his personal life began to calm down, as his proven ability to work the system began to shrink in importance, as Rudy Giuliani’s New York boomed, and new tabloid stars emerged (including Rudy himself).

So his relationship with the Post and the Daily News was replaced in time by a different relationship with a different kind of tabloid media—which is actually far rougher, far harder edged, considerably poorer, and overwhelmingly male. (It’s a mistake to think that the New York Post‘s audience is lumpen. There was a time when the Post outsold the New York Times in Manhattan. )  Trump’s goal was no longer to be the most talked-about person in New York City. It was something else, something larger.

Talk about flying under the radar. These media institutions have no cultural purchase whatsoever except for the contempt they breed. Nobody in the elites ever paid attention to them except to goggle at their ludicrousness as a passing Porsche on the way to the beach might goggle at a townie home with cars up on blocks in the front yard; or to express horror at the potential libelousness of the charges hurled in them. Such coverage would, in essence, wonder at the crudity of some Americans, and then move on.

By paying them heed, Trump was not only feeding his inexhaustible maw for attention. He was reaching a group of disaffected Americans entirely on the margins of American life, politically and culturally and organizationally. The dedicated prole-media audience, which might make up 5 or 6 percent of the electorate, is not enough to make a base. But it’s enough to make a nucleus. And what they knew is that he didn’t dismiss them. They knew he was listening to them. They knew he wanted to talk to them, wanted to hear from them.

They saw how he was jazzed by their conspiracy theories. He loathed Barack Obama as much as they did. He too thought Obama had been born in another country, that something untoward had happened to bury the fact, and that there had been a master plan to get this kid in Hawaii to the White House put in the works decades earlier. He liked them. So they liked him. A lot. And when he began his run for office by saying America was a dump and had left its best people behind by making bad deals with foreigners, they knew he was talking about what had been done to them, and they came to love him.

It was not this nucleus that showed up in Charlottesville. These were, instead, subatomic elements inside what we might call the nucleolus of Trump’s support, the tiny machine inside the atomic machine that forms the core of the Trump base. And that nucleolus is governed by rage, hatred, a sense of being wronged, and the loathing of others due to race and national origin. They are numerically insignificant to a man who secured 63 million votes in November 2016. But he—he, not I—seems to feel they are necessary to the constitution of his core. And he basically let them off with a mild warning. 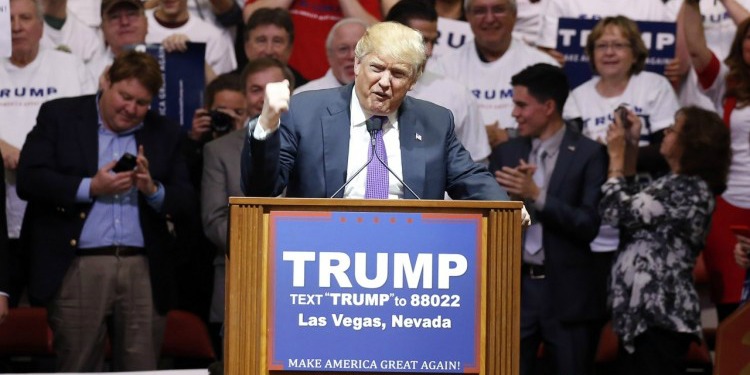