…for what it’s worth, which isn’t much, but look, this is a blog, and since we have no idea right now what on earth this new Hillary email shocker is going to mean in the election, I figured I might as well air out a fresh one to give us something to talk about.

Did James Comey go public on Friday with word of the reinvigoration of his investigation because he believed senior officials at the Justice Department were deliberately slow-walking when it came to gathering crucial information on a highly important matter until Mrs. Clinton was out of electoral danger?

And if so, did he go public because he figured if anything came out of the information in the coming months, he would have been accused of complicity in a cover-up by the Republicans in Congress he had promised to keep apprised of changes in the investigation—and would, therefore, open himself up to impeachment?

Here’s why I speculate so.

The key to Comey’s baffling behavior since Friday may be contained in Devlin Barrett’s Sunday afternoon story in the Wall Street Journal in which he lays out a surprising timeline. According to Barrett, the trouble began “in early October when New York-based FBI officials notified Andrew McCabe, the bureau’s second-in-command, that while investigating [Anthony] Weiner for possibly sending sexually charged messages to a minor, they had recovered a laptop with 650,000 emails. Many, they said, were from the accounts of Ms. Abedin, according to people familiar with the matter. Those emails stretched back years, these people said…”

Later in the story, Barrett reports that “a meeting early last week of senior Justice Department and FBI officials, a member of the department’s senior national-security staff asked for an update on the Weiner laptop…[and] officials realized that no one had acted to obtain a warrant…”

Now, recall from three paragraphs ago that the person FBI officials in New York informed about the email cache was one “Andrew McCabe.” Under McCabe’s direction, the FBI somehow neglected to secure a warrant to look at the Abedin emails for three weeks. Why? Because everybody was having lunch?

Last week, we learned that Virginia governor and Clinton intimate Terry McAuliffe had steered an astonishing amount of money into the campaign coffers of McCabe’s wife in a local race in Virginia late last year. McCabe was then the #3 person at the FBI. He is now #2. The amount was so staggering—nearly $500,000 for a state Senate seat—that it immediately raised red flags. Was a senior Justice Department official getting special favors for his wife from a Clinton Guy while Mrs. Clinton was under active investigation by his department, including investigations in which he was materially involved?

The theory is simple: Comey was indeed covering his posterior, but in this case, he was doing so because, if anything came out of the Weiner investigation, he would fry. When called upon to explain himself, he would have to acknowledge his own agency dragged its feet and did nothing about it—due to the behavior of  the husband of someone who owed a Clinton intimate a huge debt of gratitude and who is Comey’s own deputy, according to the organization charts.

Hey, I could be wrong. Barrett’s story could be someone’s spin, designed to help Comey during his nightmarish weekend. But I could be right, too.

NOTE: This post was updated because I misunderstood McCabe’s job. I thought he was #2 at the Department of Justice. He’s #2 at the FBI–which makes the argument stronger, since it would mean it was the agency under Comey’s own direct authority but without his knowledge that had failed to seek a warrant. 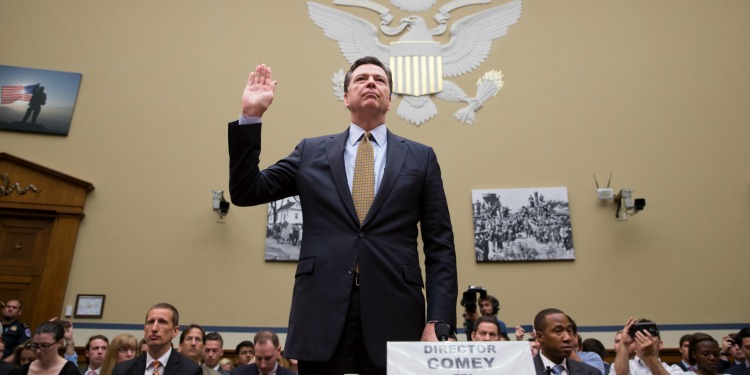