I wrote this on October 22, in a post called “Trump Will Be Impeached”:

Whether what Trump does obliges the Senate to remove him from the presidency will be up to Republicans in the Senate to decide at the trial that will follow what I think is the now-inevitable impeachment. The fact that the aid to Ukraine has in fact gone through despite Trump’s illegitimate temporary suspension may be the straw the GOP will grasp to prevent his conviction in that trial. But that’s no defense of Trump’s actions. If I’m right, they will, in effect, have to concede the wrongdoing and say it is too minor to lead to such an extreme sanction. So Trump won’t be the first president to be removed from office. He will, however, be the third to be impeached.

So he was the third to be impeached, and yes, a few Republican senators did concede the wrongdoing and say it was too minor—Susan Collins and Lamar Alexander. One, Mitt Romney, declared Trump’s actions an abuse of power and voted to convict.

What was not clear on October 22, and is clear now, was just how badly Democrats were going to handle the process of impeachment. Every step of the way, they made choices based more on their own obsessive fixations and intra-party conflicts than on creating a steady and inexorable fact-finding process. From refusing to issue subpoenas or working to hurry the court process on the subpoenas they did issue; from confusing legitimate questions about the possible “abuse of power” with the president’s entirely legitimate use of his Constitutionally-derived authority; from using their time to weep crocodile tears about Ukrainian sacrifices in that country’s conflict with Russia about which none of them gave a hoot when the cameras weren’t focused upon them; Democrats obfuscated their case against Trump rather than clarified it.

No president has ever been removed from office in an impeachment proceeding. The idea that the coming of the Iowa caucus would serve as a key factor regarding the timing of an effort to do so revealed the hollowness of the effort. Perhaps the key moment in the entire process was Rep. Adam Schiff saying that it was necessary to impeach Trump to make sure “he doesn’t cheat again.”

The “again” was the giveaway that the entire impeachment process was basically Democratic fan service. Schiff was referring to the supposed 2016 connection between the Trump campaign and Russia—the very charge that Robert Mueller pretty firmly dismissed in the first section of the two-part report that took him two years to produce. There was no collusion, there was no conspiracy—but Schiff and others simply couldn’t let their favored plotline go. Impeachment was, therefore, based on a false predicate.

If you look at it this way—and you should—you can see why Democrats didn’t mind the haste and sloppiness and refusal to pursue the Ukraine matter with serious and deliberate focus. It wasn’t actually about Ukraine. It was a way of keeping the Russia-collusion fantasy going. They had been forced to surrender it when Mueller issued his report, and they couldn’t bear to do so.

I don’t think if they had done it right they would have secured the votes for Trump’s removal. The simple fact of the matter is that the aid was not withheld and, therefore, the abuse of power the withholding represented was effectively retracted. As for the second charge, the idea the Democrats could remove Trump from office for the exercise of executive power was simply bizarre. The president is not subordinate to Congress.

What we don’t know, again, is what would have happened if the courts had adjudicated the matter and had ruled that documents had to be produced and witnesses had to be compelled. The president is not subordinate to the judiciary either. These three are co-equals, according to the Constitution. But at that point, there would have been a legitimate crisis and a serious, rather than a preposterous, claim that in blocking Congressional investigatory efforts, the president was obstructing justice.

So they impeached him. Democrats and liberals got done what they had intended to do about five hours after they dried their tears on November 9, 2016, and began to face the reality that the executive branch would be run by Donald Trump. They wished they could end it early. When they got a sufficient amount of power to turn that wish into a blueprint for removal, they followed the blueprint.

And they constructed a tower of Babel. 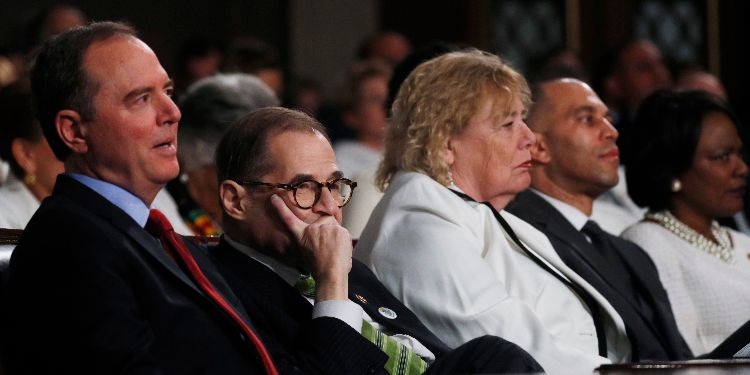