After the president’s statement on Sunday, which focused on the anti-gay “hate crime” aspect of the attack on Pulse and disregarded the specific fact that the shooter pledged his fealty to ISIS before and during his monstrous spree, the counterattack on those of us appalled by the astounding gap in the president’s words was perfectly captured by Jeffrey Goldberg’s tweet: “If Obama invokes the magical incantation ‘radical Islamic terrorism,’ will the problem go away? If yes, then he should do it right away.”

And though Hillary Clinton herself mentioned “radical Islamism” as a cause of the attack on Monday, she oddly echoed Goldberg on Tuesday by saying Donald Trump seemed to think they were “magic words.” So did the president, who said, “There’s no magic to the phrase  ‘radical Islam.’ It’s a talking point.”

Ironically, we’ve learned a great deal about this mindset from none other than Jeffrey Goldberg, whose stunning piece “The Obama Doctrine” essentially made the case that the president is almost clinically allergic to viewing the threats posed by these incidents as major national-security issues:

He has never believed that terrorism poses a threat to America commensurate with the fear it generates. Even during the period in 2014 when isis was executing its American captives in Syria, his emotions were in check. Valerie Jarrett, Obama’s closest adviser, told him people were worried that the group would soon take its beheading campaign to the U.S. “They’re not coming here to chop our heads off,” he reassured her. Obama frequently reminds his staff that terrorism takes far fewer lives in America than handguns, car accidents, and falls in bathtubs do. Several years ago, he expressed to me his admiration for Israelis’ “resilience” in the face of constant terrorism, and it is clear that he would like to see resilience replace panic in American society. Nevertheless, his advisers are fighting a constant rearguard action to keep Obama from placing terrorism in what he considers its “proper” perspective, out of concern that he will seem insensitive to the fears of the American people.

Here the blindness is staggering. Israeli resilience doesn’t involve ignoring terrorist acts. If Israel’s leaders went around saying “they’re not coming here to chop our heads off,” they would not be its leaders any longer. Israeli resilience in the face of constant terror involves moving against terrorists constantly in a multiplicity of ways, including the use of the military. Israel has fought four wars in the past 15 years to deal with “terrorism,” and quite successfully, I might add.

The problem with Obama’s attitude is that they are coming here to chop our heads off, only they’re not doing it one by one with kidnapped Americans. They’re shooting up their fellow workers in San Bernardino and a bar in Orlando. They may or may not be under foreign direction, but they are self-proclaimed jihadists. Obama won’t say it because saying it would oblige a kind of action he does not wish to take. That refusal is crystallized in his unwillingness to name the enemy. It’s proof of a deep ideological choice.

Will it be Hillary Clinton’s choice? Or will she break out of the Obama worldview and express one of her own? 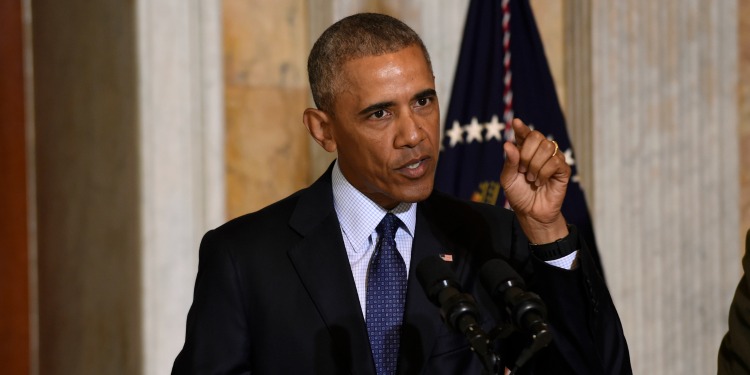