On 47th Street in Manhattan, the famous “Diamond District” where so many Jews work, someone set off an incendiary device this afternoon.

A car caravan driving down First Avenue in Manhattan featured people shouting “Fuck you, Jews” as it paraded through the streets of the city with the largest Jewish population outside Israel. Near Bryant Park, a pro-Palestinian demonstrator threw a bottle at a restaurant diner, who threw it back and was then spat upon. In Times Square, a gathering in support of Israel was set upon. That was just today. And all this came after similar scenes in Toronto and London.

Now let me speak to you of the weasel in human form who serves as the senior senator from New York and the majority leader of the U.S. Senate. His name is Charles Schumer, and over the decades he has loved nothing more than to declaim speeches to Jewish groups in which he notes that his last name translates as “guardian” in Hebrew. And as I have heard him say on several occasions, he considers himself a contemporary “shomer,” a guardian at the gates of Jerusalem, protecting Israel and the Jewish people as in ancient times.

In the city Schumer represents, in the state he represents, Jews are being attacked for being Jews and demonstrators are supporting a terrorist group that is firing rockets at Jews. Where is this vaunted shomer, this supposed guardian of his people? Spiritually cowering under his desk, terrified of a primary challenge from Alexandria Ocasio-Cortez in his 2022 election. His only significant action since hostilities began was supporting a bipartisan ceasefire statement. At the beginning of the week. The statement did say Israel has the right to defend itself. How nice. And how about my kids walking on the streets of Manhattan, Chuck? Who’s defending them, if only rhetorically? Hey, Chuck: How about your kids?

I am focusing on Chuck Schumer because he is the second or third most important Democratic elected official in America, and his silence speaks volumes about his party’s heartbreaking and disgusting refusal to confront the increasingly unmasked and open anti-Semitism spewing from the mouths and tweets of AOC and her fellow Squad members and other terrorist apologists in the House—not to mention Bernie Sanders, who shames the memories of his forbears with his humanitarian concern for every other minority group on earth save the very people whose blood courses through his ice-cold veins. 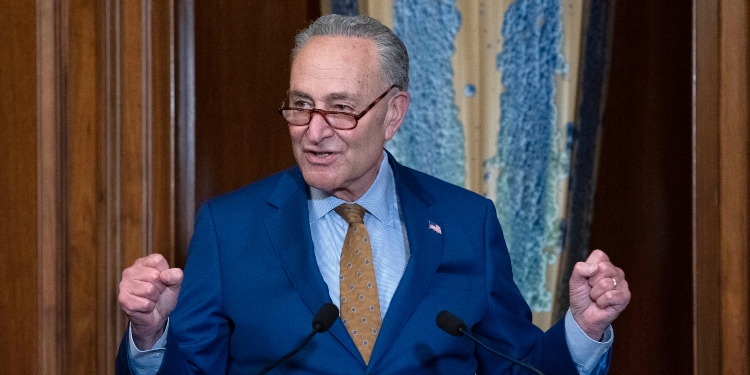