The 2020 election, it appears, was a staggering repudiation of Donald Trump. Of him. Personally.

You’re not hearing this right now because the right is in denial about the results as it works through the stages of Kubler-Ross grief. And you’re not hearing it because liberals are too busy expressing continuing shock and outrage inside their bubble—the bubble in which they have quickly learned they’d better not say anything that will bring the Woke Mob down on their heads or they will be destroyed—that anyone could even cast one vote for the man.

And yet, it’s true. What we just witnessed the most thoroughgoing repudiation of any national politician in the modern era save, perhaps, Jimmy Carter. Let me explain how and why.

Biden did this while presiding over the least energetic and most idea-free campaign in modern history. As far as his positive agenda for America goes, we should all wear masks and listen to the science. And since the public seems to have seen fit to deny Biden a Democratic Senate, he won’t be able even to rubber-stamp liberal or leftist policy items that are put on the Resolute Desk for him to sign.

There’s little or no enthusiasm for the man, and there shouldn’t be. He didn’t encourage any. In the primaries, Biden ran as the milquetoast; the most inoffensive major candidate. And he didn’t change much in the general, which is the point. His goal was to be… nothing. A flat surface.

He just wasn’t Donald Trump—and that proved to be enough to generate 80-plus million votes.

That followed a 2018 election in which 62 million Democrats cast ballots and flipped the House blue—9 million more than Republicans and a level of turnout for a midterm the likes of which we’ve hardly ever seen.

In my view, just as Trump’s brash willingness to defy political convention and his addiction to outrageous behavior won him his party’s nomination and arguably the election, they also created a movement against him of incomparable size and power.

Look, Ronald Reagan was hated like crazy. George W. Bush was hated like crazy. People demonstrated against them by the millions. But they did not generate a massive counterforce that ended up driving them from office. Far from it. Reagan won 49 states in 1984. Bush improved on his electoral college performance in 2004. Trump lost states and maybe as many as 50 electors from 2016 to 2020, while also losing the House for the Republicans.

Now listen: The vanguard of the anti-Trump sentiment, especially in the liberal chattering class and the world of leftist political activism, got lost in the thickets of its own rage and madness quite frequently, most especially on the issue of the ludicrous “he’s a Russian agent” delusion and the insatiable hunger to impeach him. They endangered their cause. They did not enhance it.

Trump enhanced their cause. It couldn’t have survived and thrived without being constantly fed by Trump. He made the best case against himself anyone could ever have made, which is what Biden’s apparent victory demonstrates. That, and the fact that, with the exception of Cory Gardner in Colorado, elected Senate Republicans thought to be doomed or nearly doomed all survived—Susan Collins, Thom Tillis, Joni Ernst, Lindsey Graham, Steve Daines, and probably Alaska’s Dan Sullivan. (Martha McSally and Kelly Loeffler were both appointed to their seats.)

The fact that Washington Republicans weren’t ditched, combined with Biden’s colorlessness and lack of an agenda, means that the astonishing turnout among Democrats and independents was driven by one overwhelming objective: To drive Donald Trump from office. And that, it seems, is the only clear message of the 2020 election. 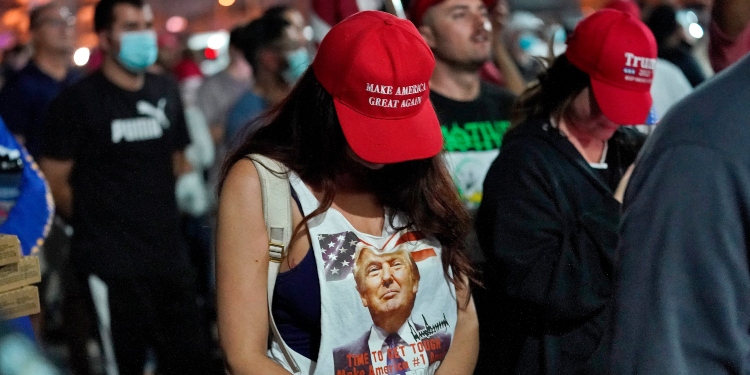