So much for giving people the benefit of the doubt who offer no sign they deserve it. The Trump White House issued a statement on Friday commemorating Holocaust Remembrance Day, and the statement didn’t make specific mention of the Jewish people—who were the target of the Holocaust, or Shoah, which is a term devised after World War II to describe the effort by Nazi Germany to eradicate Jews from the face of the earth. After reading it, I thought to myself, “The Trump White House is an amateur operation, understaffed and without much executive-branch experience, and whoever wrote the statement and issued it blew it out of ignorance and sloppiness.”

I won’t be making that mistake again.

Jake Tapper of CNN reported Saturday night that Trump spokesperson Hope Hicks defended and even celebrated the White House statement. The decision not to mention the Jews was deliberate, Hicks said, a way of demonstrating the inclusive approach of the Trump administration: “Despite what the media reports, we are an incredibly inclusive group and we took into account all of those who suffered…it was our honor to issue a statement in remembrance of this important day.”

No, Hope Hicks, and no to whomever you are serving as a mouthpiece. The Nazis killed an astonishing number of people in monstrous ways and targeted certain groups—Gypsies, the mentally challenged, and open homosexuals, among others. But the Final Solution was aimed solely at the Jews. The Holocaust was about the Jews. There is no “proud” way to offer a remembrance of the Holocaust that does not reflect that simple, awful, world-historical fact. To universalize it to “all those who suffered” is to scrub the Holocaust of its meaning.

Given Hicks’s abominable statement, one cannot simply write this off. For there is a body of opinion in this country, and in certain precincts of the Trump coalition, who have long made it clear they are tired of what they consider a self-centered Jewish claim to being the great victims of the Nazis. Case in point: In 1988, as a speechwriter in the Reagan Administration, I drafted the president’s remarks at the laying of the cornerstone of the Holocaust Museum in Washington. As was the practice, the speech was sent around to 14 White House offices, including an office called Public Liaison staffed by conservatives whose job it was to do outreach to ethnic and religious groups. The official at Public Liaison who supported anti-Communist groups in Eastern Europe was tasked with the job of reviewing it. She sent the speech back marked up almost sentence by sentence. At the top, she wrote something like, “This must be redone. What about the suffering of the Poles and the Slovaks? The president should not be taking sides here.”

I was astonished, and horrified, and took the document to my superior, who told me to ignore it. “She has a bee in her bonnet about this,” he said of the Public Liaison official.

On another occasion, in an article commissioned by a conservative magazine, I wrote a sentence in which I called the Jews “the most beleaguered people in history.” An editor there objected, and insisted we add the word “uniquely” between “most” and “beleaguered” because there was an element, he said, of “special pleading.”

I bring these anecdotes up to say that the Hope Hicks statement does not arrive without precedent. It is, rather, the culmination of something—the culmination of decades of ill feeling that seems to center on the idea that the Jews have somehow made unfair “use” of the Holocaust and it should not “belong” to them. Someone in that nascent White House thought it was time to reflect that view through the omission of the specifically Jewish quality of the Holocaust.

Now the question is: Who was it?

In those remarks at the cornerstone laying, President Reagan said this: “I think all of us here are aware of those, even among our own countrymen, who have dedicated themselves to the disgusting task of minimizing or even denying the truth of the Holocaust. This act of intellectual genocide must not go unchallenged, and those who advance these views must be held up to the scorn and wrath of all good and thinking people in this nation and across the world.” This was in reference to the new and horrifying field of Holocaust denial. It is heartbreaking to think these are words that can now be applied to the White House in which a Republican successor to Reagan is now resident, only 28 years after he departed it for the last time. Heartbreaking and enraging. 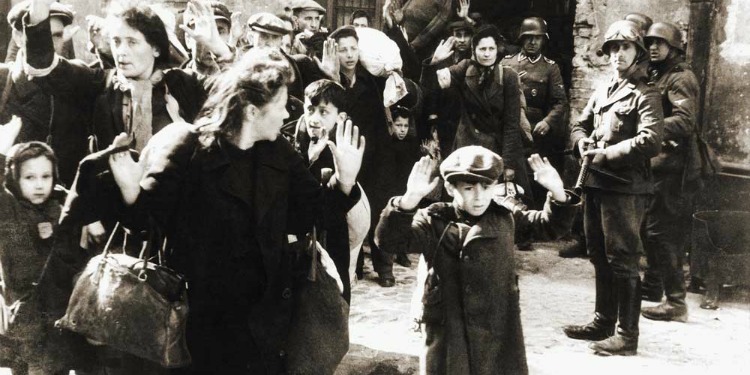