On January 9, Tom Cotton of Arkansas made a speech on the floor of the United States Senate about the shocking rise of anti-Semitic crimes in and around New York City. Everyone should read it. Here it is:

This holiday season, the ancient hatred of anti-Semitism cast a shadow over New York City during Hanukkah, the Festival of Lights. The New York Police Department recorded at least nine separate attacks against Jews—more than one attack for each day of Hanukkah. New attacks are reported seemingly on a daily basis.

In Crown Heights, site of the deadly anti-Semitic riots incited by Al Sharpton in 1991, a group of men beat up an Orthodox Jew and attacked another with a chair.

In Williamsburg, another group terrorized an elderly Jewish man on the street. “Jew, Hitler burned you,” one of the criminals reportedly said. “I’ll shoot you.”

And just outside the city, in Rockland County, a man with a machete stormed a Hanukkah celebration in a rabbi’s home and injured five worshippers, leaving two in critical condition. The family of one victim, Josef Neumann, says he may never wake up from his coma.

These heinous attacks are part of a growing storm of anti-Semitism that has made Jewish Americans fearful to worship and walk the streets in their own communities. They come in the wake of the deadly rampage at a kosher market in Jersey City that left four innocent people dead, including a police detective. And of course, they come in the wake of the deadliest anti-Semitic attack in our nation’s history: the massacre of 11 Jews at the Tree of Life synagogue in Pittsburgh by a white supremacist.

According to the FBI, our country suffered a 37 percent increase in anti-Semitic crimes between 2014 and 2018. According to the New York Police Department, the city suffered a 26 percent increase in anti-Semitic crimes in the past year alone. That increase is alarming enough. So is the fact that most hate crimes reported in New York are crimes against Jews. And while some of the increase is due to better reporting, much of it is not. Jewish Americans bear witness to this harsh reality.

Anti-Semitism is the ancient hatred, but today it can appear in new disguises. It festers on Internet message boards and social media. It festers in so-called Washington think tanks like the Quincy Institute, an isolationist blame-America-first money pit for so-called “scholars” who’ve written that American foreign policy could be fixed if only it were rid of the malign influence of Jewish money. It festers even on elite college campuses, which incubate the radical Boycott, Divestment, and Sanctions movement—a movement to wage economic warfare against the Jewish state. These forms of anti-Semitism may be less bloody than street crime in New York, but they channel the same ancient hatred, the same conspiratorial and obsessive focus on the Jewish people.

Anti-Semitic attacks are a symptom of a larger breakdown of public order in our nation’s cities caused by politicians who are letting dangerous criminals roam our streets.

While Jews were being attacked in New York City, a law went into effect eliminating pretrial detention and bail for most crimes—including serious crimes like stalking, arson, robbery…even manslaughter and negligent homicide.

This law was a gift to criminals just in time for the holidays. In some cases, it came with an actual gift: New York City’s criminal-justice system gives goodies like taxpayer-funded movie tickets to criminal suspects just for showing up to court. Movie tickets—for criminals. I wish I were joking, but the joke is on law-abiding citizens in this nation. These soft-on-crime politicians are doing their best to make crime pay in New York.

Releasing criminals is the logical next step for the criminal-leniency movement. Thanks to the new bail law, an estimated 3,800 criminal suspects were released from New York jails before New Year’s Day. Many of those suspects were arrested for new offenses within hours—within hours—of their release.

I can only imagine how demoralizing must it be for New York’s police officers to arrest a violent criminal—only to risk their safety arresting them the next day for harming somebody else, and the next day, and the next day. How terrifying must it be for witnesses of those crimes to contemplate giving evidence while the criminals they witnessed stalk the streets the very next day. And how enraging must it be for New York’s Jews to suffer constant anti-Semitic attacks and know that the perpetrators will slide through a revolving door from the lockup back into their communities to spread more of their virulent, anti-Semitic hatred.

Soft-on-crime politicians claim that cash bail and strong policing punish the poor. But is there a worse punishment for poor communities than flooding them with dangerous criminals? Making them unlivable for many law-abiding Americans who call those neighborhoods home? Because guess what, those dangerous criminals aren’t going back to live in fancy penthouses on the Upper East Side. They aren’t living in gated communities in Bethesda and Arlington. They’re living in the very communities that most need policing. That’s why the consequences of criminal leniency never fall on rich elites who praise it the most. Instead the consequences fall on the less fortunate, and on the brave officers who are duty-bound to uphold the law, even as they receive less and less support from the political class.

The real solution to disorder in our cities is the same as it always has been: More and better policing. New York’s finest—and police officers all across the country—have broken crime waves in the past, using steely resolve and superior force. They can do it again, if only we give them the freedom and support they need.

Thankfully, most Americans know whose side we’re on in the fight against crime. We stand with cops, not criminals. And we stand with the Jewish people against the ancient hatred that stalks them even to this day.

America liberated Nazi death camps in World War II, and we’ve served as a haven for persecuted Jews for longer than that. We must not allow the bigotry so common in Europe and the Middle East to spread here, to our free shores. And we must not allow our city streets to be plunged into the lawlessness of the not-so-distant past.

You can also watch the speech by clicking on this link. 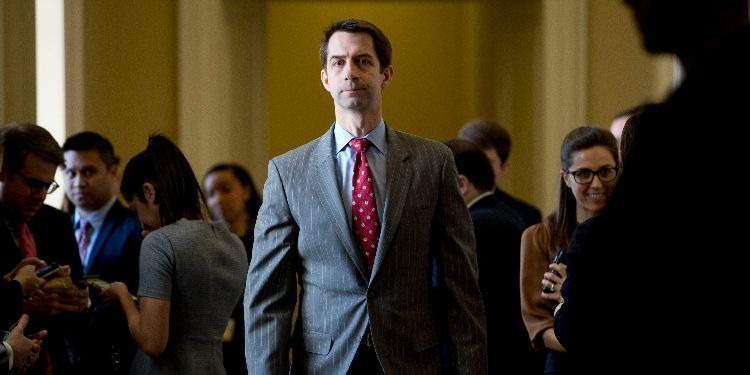