The country needs to take a Xanax, especially liberals. Their manic mood swings are driving them crazy—and sharing a nation with them is like being around an anxious child who’s figured out the best way to settle herself is to down half a gallon of Mountain Dew. The New York Times published a piece the other day about how they’re muttering quietly about a Biden landslide, only to follow it with a piece about how they’re all superstitious and terrified that 2016 is going to happen to them all over again. Meanwhile, Trump fans are having manic enthusiasms in the other direction—looking at polls that show him down 3 or 4 in a given battleground state and treating them as though they indicate he’s winning, and getting high on the hope that Hunter Biden’s sleazy business practices are going to take down his father’s candidacy the way James Comey took Hillary down in 2016.

Both attitudes are manifestations of severe anxiety with an irrational root cause. Liberals and Trumpians alike are living in 2016, trapped there as if in amber—and what they have both taken away from 2016 is that Donald Trump has some mystical, even supernatural, power to turn things to his advantage. Both believe he should have been finished by the “Access Hollywood” tape and he wasn’t. The astounding intervention of James Comey at the end of October 2016 came out of nowhere to change the trajectory of the final ten days. And winning by the skin of his teeth in Pennsylvania, Michigan, and Wisconsin when polls had him behind in all those states had something of the uncanny about it.

What makes all this so difficult for liberals is their utter inability to comprehend how anyone—anyone—can support Trump, even now. The only possible explanation for them, given their own ideological priors and their utter loathing of the man and everything he stands for, is that his supporters are Mini-Hes.

Hillary Clinton said 25 percent of the electorate were deplorables. Those who voted for her know that was a terrible mistake politically and so they tread carefully around the subject, but you know basically they believe after four years that any and every Trump voter now must be judged a deplorable.  If that voter is not a racist, sexist, rich, uncaring white supremacist, then he has no excuse for overlooking everything they hate about Trump after nearly four years in office. I think that, for many people, it is comforting when their unconsciouses tell them instead that Trump is in possession of some evil juju to cloud (white) men’s minds and make them choose him.

For Trumpians, Trump’s ability to withstand the assaults on him is a mark of somewhat superhuman qualities—as a survivor, as a fearless tribune, and as an aggressor without peer. They believe anyone else would have withered and died under these assaults, but that he’s still standing. That has kept him stable around 43 percent in approval for years despite it all. And they think he retains some nearly psychic connection to white voters without college degrees (and, increasingly, Hispanics, why not?) who are somehow ignored or overlooked or are weirdly invisible to the pollsters who seem to be on the way to consigning Trump to the ash heap of history. They will appear just in time, like A.P. Hill’s forces at Antietam, to save the day. And looky here—the Hunter Biden story has emerged, just like the magic they expect from him,  to help.

Which is also the way the exaggerated suppression of the story and the exaggerated refusal to take any interest in the story (“it’s not verified,” intoned Lesley Stahl in their “60 Minutes” interview as though she were reciting a mantra), betray the mainstream terror of Trump’s topic-changing powers. The story must be belittled, ignored, and dismissed because not to do so, even to engage with it to disprove it, might be the final element of the spell he is casting—and they just have to get to November 3 without doing anything to contribute to his possible change in fortunes. 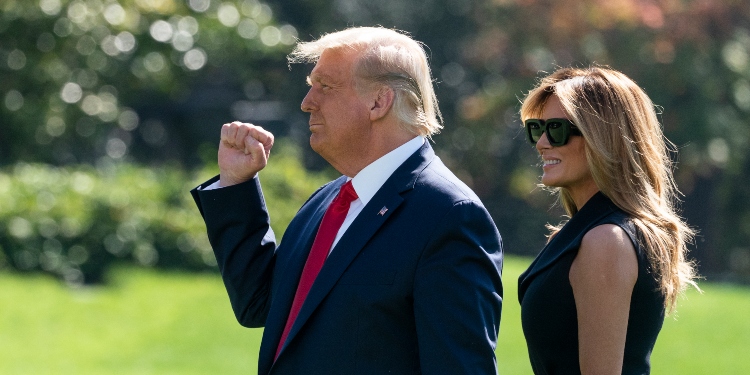