Next Tuesday marks the beginning of the 242nd year of the independence of the United States, and the day will be justly celebrated with parades, picnics, and fireworks from Hawaii to Maine.

But next Tuesday will also mark another anniversary of surpassing historical importance to this country. For it was on July 4th, 1817, 200 years ago, that the first shovelful of dirt was dug and the construction of the Erie Canal began. Finished eight years later (ahead of schedule and under budget) it united the east coast with the fast-growing trans-Appalachian west.

It was a monumental undertaking. At 363 miles, the canal was more than twice as long as any earlier canal. (The Canal du Midi in southern France was 140 miles in length.) Thomas Jefferson thought the project “little short of madness.” But Governor Dewitt Clinton saw the possibilities and went ahead, artfully handling the very considerable political opposition and arranged the financing (much of the money was raised in London).

Clinton was quickly proved right and the Erie Canal can claim to be the most consequential public works project in American history. Before the canal, bulk goods such as grain could reach the east coast population centers only by going down the Mississippi River and out through the port of New Orleans. With the canal, it could travel via the Great Lakes and the canal to the port of New York. Before the canal, it had taken six weeks to move a barrel of flour from Buffalo to New York City, at the cost of $100. With the canal, it took six days and cost $6.00. The result was an economic revolution.

Within a few years, New York City had become, in the words of Oliver Wendell Holmes (the doctor and poet, not his son the Supreme Court justice), “that tongue that is licking up the cream of commerce of a continent.” The city exploded in size, expanding northwards at the rate of about two blocks a year. That may not seem like much, but Manhattan is about two miles wide, and thus the city was adding about ten miles of street front every year, a pace that continued for decades.

The cost of the canal was paid off in only eight years and thereafter became a cash cow for the state. This allowed it to weather the crash of 1837 and the following depression, which bankrupted the state of Pennsylvania and crippled Philadelphia’s banks. New York quickly became the country’s undisputed financial center, which it has been ever since.

And while goods were moving eastwards, people were moving westward through the canal as farmers deserted the thin, stony soils of New England for the rich, deep loams of Ohio and Indiana. This “New England diaspora” moved the political center of the country westwards.

The canal era in this country was a brief one as railroads, beginning in the 1830’s, began to spread. But the Erie Canal continued to function as an artery of commerce until the 1970’s and is still used today for things that, usually for reasons of size, cannot be moved by highway or railroad. And it remains a popular avenue for recreational boating.

So Americans should remember Dewitt Clinton next week just as we remember Washington, Adams, Jefferson, and Franklin. For New Yorkers, that goes double. For it was the Erie Canal that put the “empire” in the Empire State. 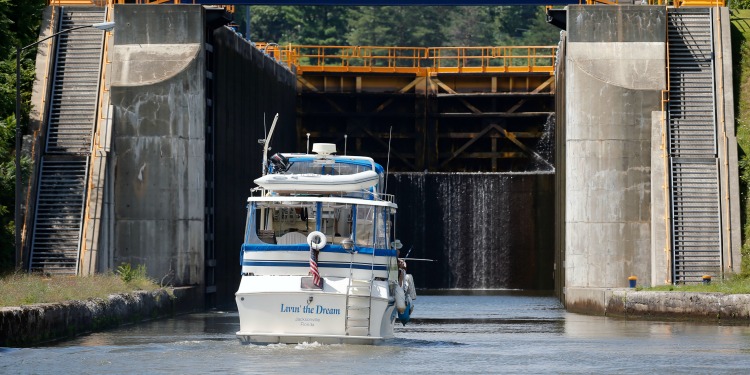