A hundred years ago today, the United States declared war on the German Empire, entering the First World War on the side of Britain and France. It was an act that profoundly changed both the world and the country.

By 1917, the United States had been the world’s foremost industrial power for more than a quarter of a century and its lead was growing steadily. With the outbreak of the war in 1914, New York swiftly succeeded London as the center of world finance. After almost a century and a half of being a debtor nation, the U.S. had become the world’s greatest creditor nation, loaning the Allies billions of dollars and selling them war matériel in huge quantities.

But the country’s foreign policy had long been one of isolation. With militarily weak countries to the north and south and the vast Atlantic and Pacific Oceans moating the east and west, the United States was immune to attack by a foreign power. Although the United States Navy–hardly more than a coast guard in 1880–had become by 1914 the third largest in the world, after only the Royal Navy and the German Kriegsmarine, the U.S. could afford to maintain only very small military forces.

In his Farewell Address of 1797, George Washington warned against the dangers of “entangling alliances.” John Quincy Adams, perhaps the best Secretary of State in American history, said in a July 4th speech in 1821 that the United States “goes not abroad in search of monsters to destroy.” Yet, on April 6th, 1917, the United States did exactly that.

For the first time in American history, it intervened in a foreign conflict. The ostensible reason was Germany’s return to a policy of unrestricted submarine warfare, sinking vessels of whatever flag that sought to supply Britain and France. Also the publication of the “Zimmerman telegram,” which offered Mexico the return of its “lost provinces” if it were to attack the United States following the outbreak of war with Germany, had infuriated the American public.

Unquestionably, another reason was the fear that Britain and France might end up losing the war, making Germany the undisputed European hegemon and, of course, threatening their ability to repay American loans.

Germany knew that a return to unrestricted submarine warfare would likely bring about American entry into the war. But it was willing to gamble that by the time the United States could create, train, equip, and deploy an army large enough to be decisive, Britain and France would have been forced to negotiate for peace because of the disruption of their Atlantic lifelines.

Germany, of course, lost that gamble. But the United States, try as it might, could not return to its old isolation. The vindictive Versailles peace conference–badly mishandled by President Woodrow Wilson–and the withdrawal of the United States, the world’s foremost economic and financial power, from world affairs ensured a renewal of the conflict in an even more terrible war twenty years later.

After the Second World War and the emergence of the threat of the Soviet Union, the United States, in its own self-interest, realized that it had no choice but to lead the world’s democracies. It had to maintain very large military forces deployed around the world, as it has done at huge expense for the last 75 years.

Nor is there any sign that this burden can be lifted in the foreseeable future. The relative power of the United States has declined since the end of World War II, when it had about half the global GDP, as the other great powers recovered from the war and their economies expanded rapidly. But the United States is still in a class by itself as an economic and technological superpower and only it, like it or not, can play the role of the world’s policeman.

We’ll never know, of course, what would have happened had the United States stayed out of the First World War. But what we do know is that April 6, 1917, was a fateful day in both American and world history. 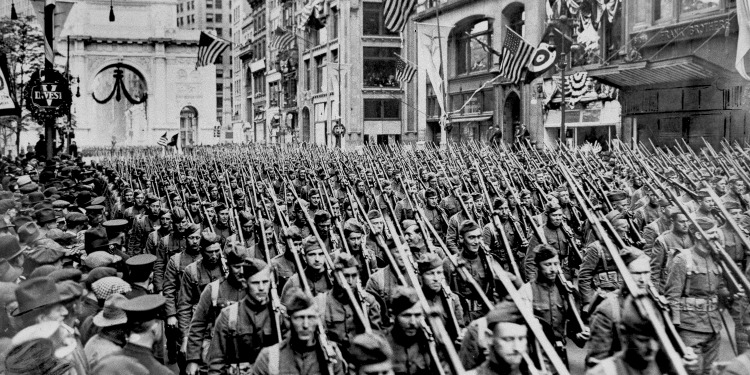