As Noah has pointed out, the “wealth tax” proposals advanced by Senators Bernie Sanders and Elizabeth Warren are likely unconstitutional. Such a levy would constitute a direct tax, which is forbidden by Article I, Section 9, of the Constitution unless the tax is proportioned among the states according to population–something obviously impossible here. The 16th Amendment only allows a single exception, the taxing of income “from whatever source derived.” Wealth is not income, which is a transfer of wealth. It is property.

But a wealth tax would also be unconstitutional in at least two other ways.

First, it would violate the 5th Amendment’s prohibition against taking private property for public use without just compensation. The “takings clause” has usually applied to the seizure of real property, but an ownership share in a corporation is most certainly property as well. As Black’s Law Dictionary defines it, the word property is “used to denote everything which is the subject of ownership, corporeal or incorporeal, tangible or intangible, visible or invisible, real or personal; everything that has an exchangeable value or which goes to make up wealth or estate.” There would not be much point to imposing a wealth tax if the government had to compensate the payer dollar for dollar.

Article I, Section 9, also forbids bills of attainder. These were once used in England to convict by legislation instead of by the judgment of a court, usually for treason. (Besides being specifically forbidden in the federal and all state constitutions, a bill of attainder would also violate the 14th Amendment’s requirement of due process.) The penalty imposed by a bill of attainder was death, and all property of the condemned was escheat to the crown. If a lesser punishment was specified, it was a “bill of pains and penalties,” but those were also bills of attainder. A wealth tax, in other words, is not a tax at all. It is not an excise tax, like those that apply to the purchase of alcohol, or the tax on earned income. Instead, it is a legislatively-imposed fine for being too rich.

Even aside from the patent unconstitutionality of a wealth tax, just consider the economic consequences. Suppose Jeff Bezos, Bill Gates, Mark Zuckerberg, and their confrères on the Forbes 400 List all had to pay an 8 percent tax on their net worth. Where would they get the money to do that?  Senators Warren and Sanders seem to think that billionaires store their wealth, like Scrooge McDuck, in vast money bins in which they happily dive and frolic (Scrooge McDuck’s money bin was a wonderfully meaningless “three cubic acres” in size) and from which they can dip at will. In reality, of course, their wealth is invested. In these specific cases, those investments take the form of stock in Amazon, Microsoft, and Facebook. Selling 8 percent of their shares to meet the tax would cause the prices of those stocks to tank, reducing the net worth of everyone else who owns those stocks in less awesome amounts–as millions of middle-class citizens do–directly or indirectly.

Of course, the market wouldn’t wait for the tax to come due. Stock markets are in the business of predicting the future. As soon as it became likely that a wealth tax would become law (however temporarily before the courts threw it out), a hair-curling crash would ensue. 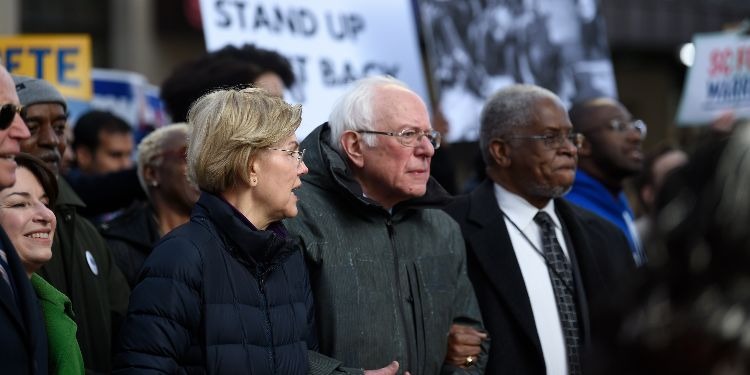