It is not easy to get both that bugbear of the left, the National Rifle Association, and the very liberal American Civil Liberties Union on the same side of a public question. But New York’s Governor Andrew Cuomo has managed to do it with a breath-taking act of political thuggery.

The NRA, whatever you think of it, is a perfectly legal association founded in 1871 and has about 6 million members–roughly 2 percent of the US population. The NRA interprets the 2nd Amendment as protecting an individual right to bear arms and works to protect that right. The ACLU argues that the 2nd Amendment protects only a collective right to bear arms. (The Supreme Court agrees with the NRA.)

But it is the job of the ACLU to protect all the rights guaranteed by the Constitution, including the 1st Amendment right “of the people peaceably to assemble.” Forming an organization to lawfully pursue a political agenda is at the very heart of the right to be heard in the political marketplace.

Governor Cuomo knows that attacking the NRA is always popular on the left, so Cuomo is going after the NRA’s ability to function. In October 2017, the state Department of Financial Services, at the behest of an anti-gun organization, began an “investigation” of an insurance company called Lockport, which handled the NRA-branded personal liability insurance called Carry Guard. In February, Lockport ended its 20-year relationship with the NRA, quickly followed by insurance giants Chubb and Lloyd’s.

Maria Vullo, head of the Department of Financial Services, then sent two letters to every bank, financial company, and insurer licensed to do business in New York State. It “advised” them to, “review any relationships they have with the NRA or similar gun promotion organizations, and to take prompt actions to managing [sic] these risks and promote public health and safety.”

In other words, “It’s a nice little business you have there. It would be a pity if something should happen to it.”

Numerous banks and insurance companies have now refused to work with the NRA. It won’t be able to continue its NRA cable TV channel unless it can obtain ordinary media liability insurance, crippling its 1st Amendment right to advocate for its position.

Cuomo chimed in the next day with a tweet: “The NRA is an extremist organization. I urge companies in New York State to revisit any ties they have to the NRA and consider their reputations, and responsibility to the public.” He later posted on Facebook that, “The regulations NY put in place are working. We’re forcing the NRA into financial jeopardy. We won’t stop until we shut them down.” Or, more honestly, shut them up.

The NRA has sued New York State, Governor Cuomo, and Maria Vullo, to overturn this egregious violation of its 1st Amendment rights, and the ACLU has filed an amicus curiae brief. In a blog post on the subject it wrote:

In the ACLU’s view, targeting a nonprofit advocacy group and seeking to deny it financial services because it promotes a lawful activity (the use of guns) violates the First Amendment.

It also points out that if a liberal governor can use the state’s regulatory power to stifle the ability of a conservative group to advocate for its position, then so can conservative governors go after, say, Planned Parenthood or even the ACLU in the same way.

Cuomo is a lawyer, so I suspect he knows perfectly well that his actions are utterly cynical politics that will not stand up in court. But if Governor Cuomo gets away with this, the 1st Amendment will lie in tatters. 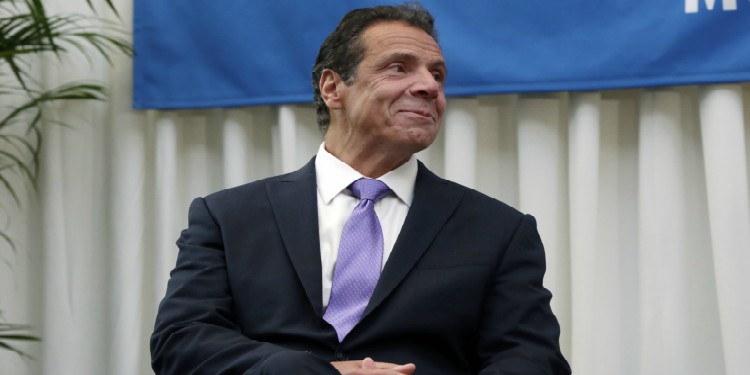