With the NYPD giving the statue of Christopher Columbus in New York’s Columbus Circle 24/7 protection from self-appointed moral vigilantes, this Columbus Day is a good time to think a little about the most famous explorer in world history.

Columbus is accused of mistreating the Indians he found (not to mention misnaming them because he thought he was in Asia), enslaving them, and committing genocide by infecting them with diseases against which they had no immunity.

But Columbus went to his grave (in 1509) still thinking he had found the outer islands of Asia and that Japan and China lay just over the horizon. The very phrase “New World” was only coined in 1555, nearly half a century after his death.

Once the full-rigged ship—developed in the mid-1400s—made long ocean voyages possible, the European discovery of America was just a matter of time. If it hadn’t been Columbus, it would have been someone else and very soon.

Equally, had Columbus known the true size of the Earth, he would never have tried to sail to Asia by going west across an ocean he would have thought 12,000 miles wide. Fortunately for him, he had taken the estimate made by the ancient—and, in the middle ages, canonical—astronomer Ptolemy, which underestimated the circumference of the planet by a third. The earlier astronomer, Eratosthenes, calculated it correctly and with an apparent error of only one-half of one percent; an astonishing achievement for the third century BC. (By the way, the idea that Columbus first had the idea that the world was round is a myth, cooked up by Washington Irving, of all people, in the early 19th century.)

Since microorganisms were undreamed of until the late 17th century and their disease-causing potential unknown until the late 19th, it’s a bit unfair to blame Columbus for the European diseases, such as measles and smallpox, which quickly devastated Indian populations. (It is probable that the Indians returned the compliment by infecting the Europeans with syphilis, which first appeared in Europe about 1494.)

To be sure, the Europeans used their technological superiority to quickly dominate the New World Columbus had discovered. But this imperialist use of technology is not peculiar to Western civilization. Indeed, every society that developed a new technology with war-making potential has used it to beat up their neighbors. The spear thrower, developed in the Paleolithic era about 30,000 years ago, not only made humans more efficient hunters but undoubtedly made them more effective warriors as well. War is a human, not a Western, trait. Indeed, since Chimpanzees are known to frequently make war on neighboring groups, it is not even a human trait but a hominoid one.

I imagine this war on Columbus will dissipate quickly. Its only basis is a profoundly anti-Western orientation mixed with staggering historical ignorance. I’m sure the Antifa crowd will find some new villain to go after soon. 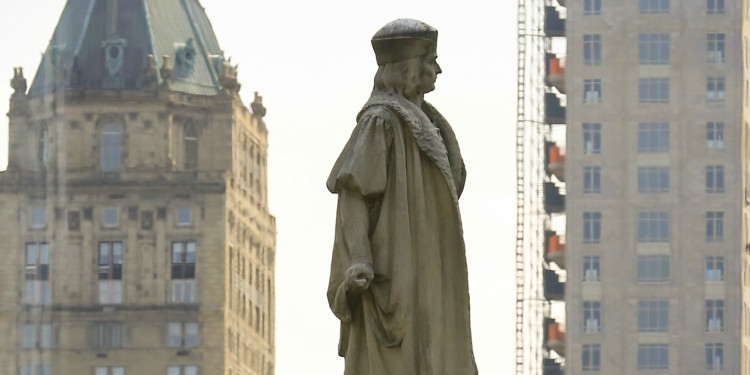