The dark night of fascism is about to descend on America. Or at least so a full-page from “refusefascism.org” in today’s New York Times proclaims.

The ad is signed by the likes of Bill Ayers, who co-founded the Weather Underground–a group of 1960’s radicals who engaged in such neo-fascist behavior as blowing things up and robbing Brinks trucks (murdering three people in the process); Alice Walker, the Pulitzer-Prize-winning author; Niles Eldridge, a very distinguished biologist and paleontologist; and a bunch of people I’ve never heard of including a “performance artist” with the interesting name of Dread Scott.

The ad calls for “a month of resistance that reaches its crescendo by the January 20th, 2017 inauguration,” with millions in the streets. It also says that “The Trump Regime Must and Can Be Stopped Before It Starts!” That sounds like calling for a coup d’état to me.

Fascism, according to its formal dictionary definition is, “a political philosophy, movement, or regime … that exalts nation and often race above the individual, and that stands for a centralized autocratic government headed by a dictatorial leader, severe economic and social regimentation, and forcible suppression of opposition.”  But, today, the word fascism is actually completely empty of actual meaning—just as calling someone an S.O.B. doesn’t imply that his mother has a cold, wet nose and wags her tail. It is simply an epithet applied to anyone the left doesn’t like, such as Donald Trump.

Unlike in many West European countries, including even the U.K, there has never been a fascist movement in this country. Indeed, the brown shirts are and always have been all on the left. It is the left that riots in the street (and calls for more in expensive newspaper ads) when they don’t like an election result. It is the left that utilizes mobs of thugs to disrupt events on college campuses and to prevent speakers from having their say. It is the left that uses political correctness to stifle free speech and force social regimentation. It is the left that calls for concentrating power in an ever more centralized government.

Needless to say, none of what “refusefascism.org” calls for is going to happen. For the 45th consecutive time in American history, power will pass from one duly elected leader to another and American democracy, a glorious light unto the world, will continue. 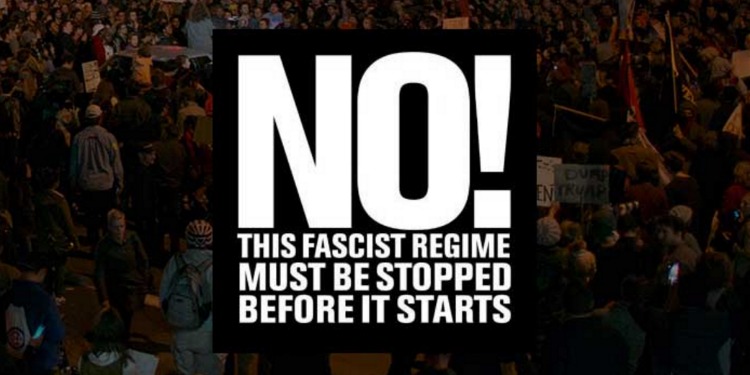