Thirty years ago today—October 19th, 1987—the bottom dropped out of the stock market.

After the Federal Reserve had stopped the rampant inflation of the 1970’s by inducing a sharp recession that pushed unemployment up to 10.8 percent, the great boom of the 1980’s began. As usual, the stock market anticipated it. There was a full-blown buyer’s panic in August of 1982 as traders piled into stocks. The Dow crossed 1,000 for the third (and last) time that year and hit 1,500 on December 11, 1985. A year later it hit 2,000 and only six months later still hit 2,500, a Dow-Jones number almost inconceivable a few years earlier.

But such a rise is bound to cause a correction sooner or later, and the market peaked at 2,722.42 on August 25, 1987. Japanese traders began selling U.S. securities, especially Treasuries, pushing up bond yields sharply. The Treasury Secretary, James Baker, threatened to let the dollar fall against other currencies. War clouds were building in the Persian Gulf. And the market began to retreat. By Friday, October 16th, the Dow had fallen 17.5 percent to 2246.74, off 109 points that day alone—the biggest single-day point drop in the Dow ever.

Asian markets opened sharply lower on Monday, October 19th, and London followed suit. When the New York Stock Exchange opened that morning, there was such an imbalance between buy and sell orders that only 25 of the S&P 500 could open at all. NASDAQ market-makers began to stop answering their phones, shutting down trading in small-cap stocks. Rumors that the SEC was about to close the market caused still more panic.

By the time the market closed at four o’clock, the Dow was down 22.6 percent on volume of 608 million shares, twice the previous volume record. In the crash of 1929, the volume was 16 million shares; a record that stood until 1968. Two old, large brokerage firms had failed, as had sixty small ones.

The next morning, prices sagged further, but then the Federal Reserve acted as central banks are supposed to act in such a situation. It injected massive liquidity into the system by buying large amounts of Treasuries, greatly increasing bank reserves and thus the banks’ ability to lend. And it leaned, hard, on the banks to reopen credit lines to brokerage firms that the banks had been closing in the previous two months. It was the first time since 1792 that the federal government had acted decisively to stop a market panic. And it worked.

The market steadied around noon and then rose sharply for the rest of the day. Because the underlying economy was sound and growing quickly, stocks soon began to rise again. The market recovered its 1987 high in only two years (it took 25 years to recover reach 1929’s high), and it reached 3,000 in the spring of 1991.

Because the Fed did its duty in 1987 and “flooded the Street with money,” the crash today is almost completely forgotten (except by the pros who were on the Street that day, which was for many the most exciting and terrifying of their careers). But the crash of 1929, when the Fed did nothing, is still seared in the American folk-memory.

We can only hope that the Fed learned its lesson that day and when the next crash comes along—and it will come someday, as sure as the sun will rise in the east that morning, it will once again flood the Street with money. 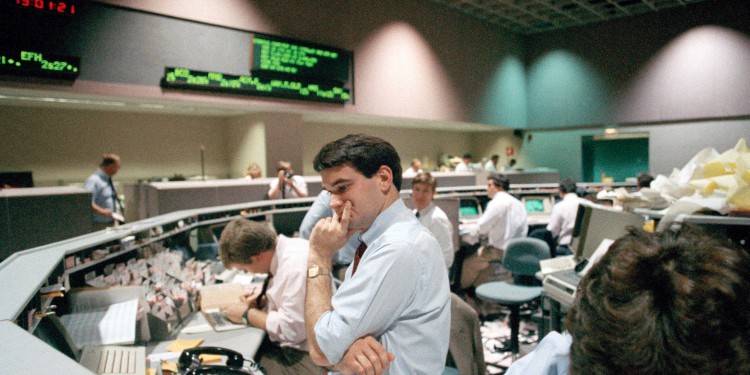