In Herman Wouk’s masterful novel, The Caine Mutiny, Captain Queeg tries to relive a bright moment in his otherwise drab naval career. Years earlier, he had solved the puzzle of who had stolen some cheese and received a commendation letter for it. Now some frozen strawberries had disappeared from the officer’s wardroom. Amid this mystery, Queeg insists that all keys on board be confiscated to find out who had access to the wardroom food stores. He turned the ship upside down, and no culprit was ever found because, as everyone knew, the strawberries had been eaten by the mess boys. Queeg’s prestige among the officers and crew, already low, was gravely diminished by the incident.

Years ago, the media investigated a president they detested, Richard Nixon, and helped to bring him to the point where he had no choice but to resign. For some, this was American journalism’s finest hour. IT was recounted in endless books, movies, and TV specials. After the election in 2016, a new president the media detested had been elected, and rumors swirled that he had colluded with the Russians in order to win the election. The media wanted to relive the glory days of Watergate and went after President Trump with a vengeance.

But there was one important difference between the so-called Russian collusion case and Watergate. There had been an actual crime at the beginning of the Watergate scandal–the headquarters of the Democratic National Committee had been broken into—and the trail soon led to the White House. That was not the case with Russian collusion. Indeed, the absence of hard facts in this case was striking. There was no Saturday Night Massacre, no 18 and a half-minute tape gaps, and no an Oval Office taping system.

And the Mueller investigation was, remarkably for Washington, leakproof. Regardless, the press couldn’t get enough rumor and supposition. There was an endless parade of guests on CNN and MSNBC alleging imminent developments. Fox News produced an amusing compilation of CNN and MSNBC guests saying, “The noose is tightening,” “the walls are closing in,” “Indictments are coming soon,” “the president will go to jail,” and on and on. Democrat Adam Schiff, then-ranking member and now chairman of the House Intelligence Committee, appeared dozens of times to say that he had clear evidence, convincing evidence, strong evidence of collusion.

And then—poof!—it all collapsed in a heap. The Mueller investigation, with 19 lawyers and 41 FBI agents, having spent almost two years and $30 million, having conducted scores of interviews and subpoenaed bales of documents, could find no evidence of collusion. There was simply no there there.

News media has thus suffered a grievous loss of prestige—a commodity they were not well endowed with anyway. It will be long, hard work to regain the public’s trust. As for Adam Schiff, he has made himself into the new Senator Joseph McCarthy, who frequently waved papers and said, “I have here in my hand a list of communists.” McCarthy, at least, was censured by the Senate and rendered politically impotent. Schiff should suffer the same fate. 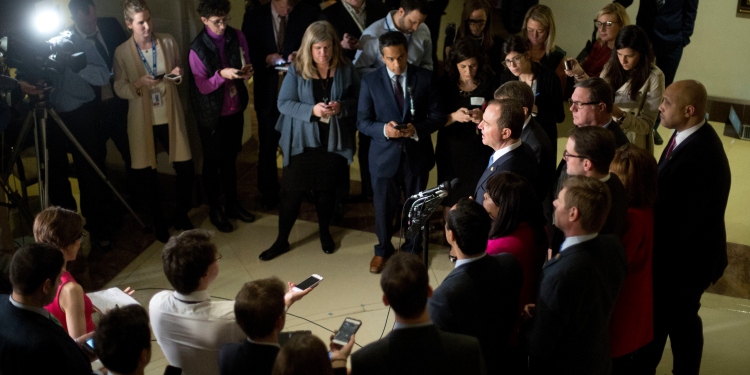