On June 4th, 1942, 75 years ago yesterday, the American and Japanese navies met west of Midway Island in the middle of the Pacific Ocean. By the end of the day, the whole Pacific war had been transformed. The Battle of Midway was, thus, one of the most decisive battles in world history and the U.S. Navy’s greatest victory.

The United States and its allies had been on the defensive ever since the surprise attack on Pearl Harbor the previous December, which crippled the American fleet.

Providentially, however, the American aircraft carriers had been at sea and so had escaped harm. As the attack on Pearl Harbor had shown decisively, it was the aircraft carrier that now ruled the sea, not the battleship.

The Japanese had run riot for six months, seizing the Philippines, Hong Kong, Guam, and the Dutch East Indies. But in April, the Doolittle Raid struck back. B-25 bombers, launched off the USS Hornet, bombed Tokyo and other Japanese cities. The damage was minimal, but it came as a profound shock to the Japanese high command. They decided to lure the American carriers into a decisive battle by attacking Midway Island at the far northwestern end of the Hawaiian Island chain.

The Japanese also thought that the U.S. Navy had only two carriers. They thought they sunk the Lexington at the Battle of the Coral Sea in early May, which they had, and the Yorktown, which they had not. The Yorktown made it back to Pearl Harbor and, in an astonishing feat, was made ready for battle in only 48 hours.

Lying in wait for the Japanese northeast of Midway, as soon as the Japanese were spotted, the three American carriers launched attacks. At first, it did not go well as the obsolescent American torpedo planes were shot out of the sky. But at a critical moment, when the Japanese air cover was out of position, and their carrier decks were littered with planes, ordnance, and fuel lines, American dive bombers struck three of the carriers, reducing them to flaming wrecks. The fourth Japanese carrier was sunk later that day.

The Yorktown was later hit, but not fatally, until the next day it was hit by a torpedo from a Japanese submarine and sank.

The Japanese Imperial Navy’s superiority in aircraft carriers was erased in a day, and Japan could not hope to match the United States in new construction. Indeed, between 1942 and 1945, Japan completed 550,000 tons of naval construction; the U.S. just 3,200,000 tons.

It would take another three years of hard, bloody fighting. But after Midway, the Pacific War was quintessentially a naval war. One that Japan was doomed to lose. 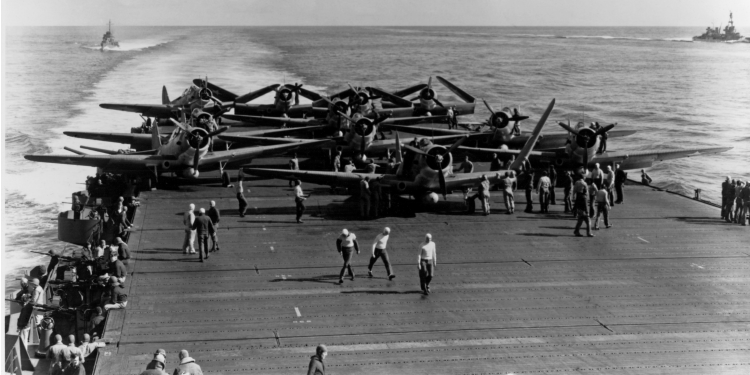