I agree with Noah that Woodrow Wilson was both a horrible president and a horrible person. I also agree that Princeton should not expunge his name from the campus he once led. Wilson is a very important part of both Princeton and United States history and that history should be allowed to live. Only tyrants would want to emulate what ISIS did to Palmyra.

I would add one more Wilson failure, the Treaty of Versailles. Wilson was so determined to get his League of Nations that he allowed the vengeful peace that France and Britain wanted but which laid the seeds for a second war even more terrible than the first. And Wilson didn’t even get his league as he refused to allow the Republican majority in the Senate to have any say in how it was structured, so the Senate refused to ratify the treaty and we never joined the league.

But I have to exonerate Wilson on one point. Noah wrote,

To finance the war, Wilson secured a constitutional amendment legalizing a federal income tax – a development which radically enhanced the central government’s power and paved the way for Prohibition by eliminating Washington’s reliance on revenue derived from the sale of spirits.

The 16th Amendment to permit a personal income tax was the work of William Howard Taft and was declared ratified in February, 1913, just before Wilson took office and a year and a half before World War I broke out. The first modern income tax was passed in October, 1913, and only affected those with incomes above $4000, i.e. the upper middle class and the rich. In its first year it raised a paltry $28.3 million (federal revenues in 1914 were $725 million).

The purpose of the income tax was to force the rich to, ummm, “pay their fair share,” and before 1913 they most certainly were not. The federal government was largely financed by consumption taxes, the tariff and excises taxes on such commodities as alcohol. And consumption taxes are inherently and inescapably regressive, falling on the poor far more heavily than on the rich, who consume far less of their incomes.

What has happened to the income tax since 1913 is a national disgrace, but that was not Woodrow Wilson’s fault. The income tax was a great reform and one of the crowning achievements of the Wilson administration. Unfortunately, it’s a political truism that today’s reform is tomorrow’s problem. 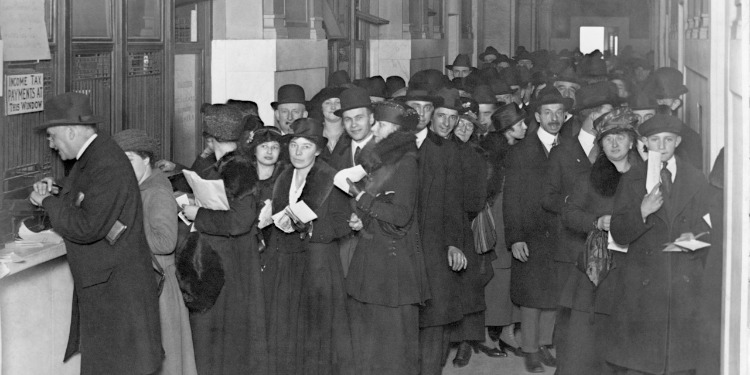