The billionaire political activist Tom Steyer has put out a series of ads calling for the impeachment of President Trump. “Donald Trump has brought us to the brink of nuclear war,” his ad claims, “obstructed justice, and taken money from foreign governments. We need to impeach this dangerous president.”

Impeachment is a political, not judicial, act. The “high crimes and misdemeanors” given in the Constitution as the grounds for impeachment are undefined. They are whatever a majority in the House and two-thirds of the Senate decide they are. Impeachments are unreviewable by the courts and beyond the president’s pardon power.

But Steyer’s listed grounds for impeachment are, at best, laughable. To the brink of nuclear war? October 1962, when two superpowers had their fingers hovering over the red button, was the brink of nuclear war. The Korean problem involves a tin-pot dictator of a country that apparently can’t even feed its own troops well, let alone its population. Just a guess, but if the US were on the brink of war, nuclear or otherwise, the armed forces would surely have canceled leave by now. How Trump has obstructed justice, I know not. As for taking money from foreign governments, I assume that refers to the fact that the Trump Organization owns a fancy hotel in Washington where foreign officials often stay. That’s a very, very long way from taking of money from a foreign government, which is forbidden by the Constitution’s “Emoluments Clause.”

In the ad, Steyer takes pains to make himself look like just folks, wearing a flannel shirt, talking about using his “savings” to help bring down Trump. If you are worth $1.6 billion, you are not just folks, and you don’t have savings.Saving takes discipline. If your income is in the many millions, it is almost impossible not to save.

And Steyer’s political complaints are straight out of 1905. He claims that the tax bill now in the Senate would be a giveaway to “big corporations.” But who owns the “big corporations?” The answer is not the J. P. Morgans, John D. Rockefellers, and Andrew Carnegies of today. It is the American people at large. Forty-seven percent of American families own stock in their own names. They and millions of other families own mutual funds and are the beneficiaries of pension funds. This is where the locus of corporate ownership lies today.

One of the great stories of the American economy in the 20th century was the democratization of capitalism. But Steyer, like all liberals, doesn’t know about it. These commercials are just one more sign of the utter intellectual and political bankruptcy of today’s left. They are still fighting the battles of two generations ago. 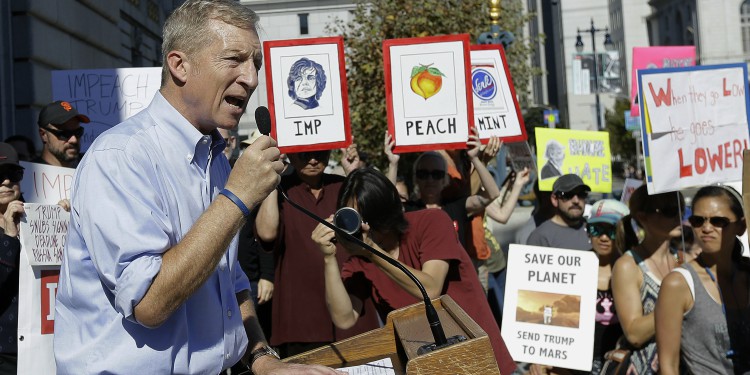