This is more than political boilerplate. Reagan identified the source of the threat: human nature. God may have endowed us with a right to liberty, but he didn’t give us all a taste for it. As with most finer things, we must work to acquire a taste for it. That is what civilization—or at least our civilization—is supposed to do: cultivate attachments to certain ideals. “Cultivate” shares the same Latin root as “culture,” cultus, and properly understood they mean the same thing: to grow, nurture, and sustain through labor.

In the past, threats to free speech have taken many forms—nationalist passion, Comstockery (both good and bad), political suppression, etc.—but the threat to free speech today is different. It is less top-down and more bottom-up. We are cultivating a generation of young people to reject free speech as an important value.

One could mark the beginning of the self-esteem movement with Nathaniel Branden’s 1969 paper, “The Psychology of Self-Esteem,” which claimed that “feelings of self-esteem were the key to success in life.” This understandable idea ran amok in our schools and in our culture. When I was a kid, Saturday-morning cartoons were punctuated with public-service announcements telling kids: “The most important person in the whole wide world is you, and you hardly even know you!”

The self-esteem craze was just part of the cocktail of educational fads. Other ingredients included multiculturalism, the anti-bullying crusade, and, of course, that broad phenomenon known as “political correctness.” Combined, they’ve produced a generation that rejects the old adage “sticks and stones can break my bones but words can never harm me” in favor of the notion that “words hurt.” What we call political correctness has been on college campuses for decades. But it lacked a critical mass of young people who were sufficiently receptive to it to make it a fully successful ideology. The campus commissars welcomed the new “snowflakes” with open arms; truly, these are the ones we’ve been waiting for.

“Words hurt” is a fashionable concept in psychology today. (See Psychology Today: “Why Words Can Hurt at Least as Much as Sticks and Stones.”) But it’s actually a much older idea than the “sticks and stones” aphorism. For most of human history, it was a crime to say insulting or “injurious” things about aristocrats, rulers, the Church, etc. That tendency didn’t evaporate with the Divine Right of Kings. Jonathan Haidt has written at book length about our natural capacity to create zones of sanctity, immune from reason.

And that is the threat free speech faces today. Those who inveigh against “hate speech” are in reality fighting “heresy speech”—ideas that do “violence” to sacred notions of self-esteem, racial or gender equality, climate change, and so on. Put whatever label you want on it, contemporary “social justice” progressivism acts as a religion, and it has no patience for blasphemy.

When Napoleon’s forces converted churches into stables, the clergy did not object on the grounds that regulations regarding the proper care and feeding of animals had been violated. They complained of sacrilege and blasphemy. When Charles Murray or Christina Hoff Summers visits college campuses, the protestors are behaving like the zealous acolytes of St. Jerome. Appeals to the First Amendment have as much power over the “antifa” fanatics as appeals to Odin did to champions of the New Faith.

That is the real threat to free speech today. 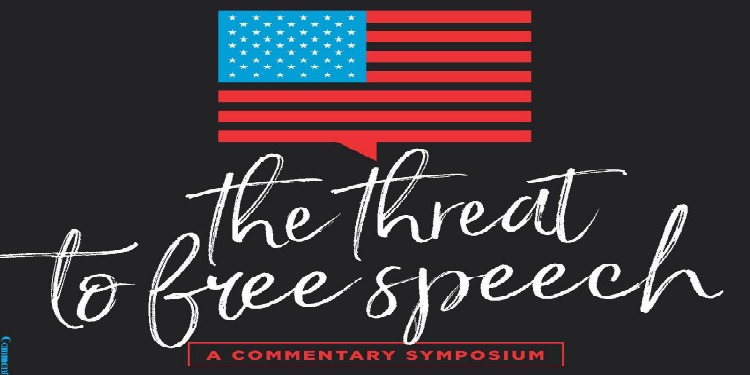 Jonah Goldberg holds the Asness Chair in Applied Liberty at the American Enterprise Institute. This essay builds on themes and ideas from his latest book, Suicide of the West: How the Rebirth of Tribalism, Populism, Nationalism, and Identity Politics is Destroying American Democracy, as well as from his 2010 Commentary piece “What Kind of Socialist Is Barack Obama?”