According to the Book of Genesis, God flooded the world not only because human beings were corrupt but also because, through their evil, “the earth was corrupt.” Modern readers are often perplexed by the idea that human evil stains non-human things. But the University of Wisconsin, Madison gets it. That metaphysical awareness helps explain why they just spent $50,000 to remove a corrupt boulder from its campus.

When the boulder was put on display in 1925, it was referred to by a name that contained the n-word, a name “commonly used at the time to refer to any large, dark rock.” As the Jim Crow Museum of Racist Memorabilia explains, this same term was used to describe a brand of oysters, a kind of overcoat, a mountain, and many other things and places.

According to some accounts, area residents referred to the rock by the same “disruptive” name for some time. But the only reference history has left us is a cheerful article explaining that the boulder, formerly only “partly visible,” was “now out where folks can look at it.” The offensive term is placed in quotation marks. According to the New York Post, “university historians have not found any other time that the term was used” to refer to the boulder. In any case, it has been known as Chamberlin Rock, after a 19th-century geologist and University of Wisconsin president with no bigotry on his record, for over 90 years.

The activists who demanded the removal of Chamberlin Rock last summer consider it a symbol of “ongoing harm.” Nalah McWhorter, president of the Wisconsin Black Student Union, called it “a constant reminder of the injustices we face, not only on this campus but in society as a whole.” It’s “another example and another symbol that we don’t belong here.” As one reporter summarizes, the Chamberlin Rock had “become a painful symbol of racism to generations of students,” although I can find no evidence of anyone raising the issue prior to last year.

A 2016 survey conducted at the University of Wisconsin suggests that black students feel considerably less welcome and respected on campus than white students do. Twenty-nine percent of black students report experiencing hostile, harassing, or intimidating behavior on campus. But those unfortunate facts should not distract us from the absurdity of this boulder theater.

Recall all the campus fights in recent years over renaming buildings named for figures deemed, sometimes fairly, sometimes not, too implicated in racial injustice to be honored. On the reasoning behind the decision to remove Chamberlin Rock, renaming isn’t enough. Once an object has been touched, even incidentally, by race prejudice, renaming cannot wipe out the stain or the danger to passers-by.

That’s the reasoning endorsed not only by student activists but also by Chancellor Rebecca Blank, who promised to have the boulder moved in January. The Campus Planning Committee subsequently voted unanimously in favor of removal. To read the minutes of the meeting at which the vote was taken is to be awestruck by the way in which nearly everyone present endorses this strained logic.

A psychology professor opined that “we as a campus are truly committed to making an inclusive environment, we need to remove all symbols of racism.” One historian admitted that exactly one newspaper clipping suggested even a tenuous connection between Chamberlin Rock and racism. And yet, excising the rock from campus was “an opportunity to ‘prioritize students of color.’” Another administrator said that the “rock interferes with equal educational opportunity for all.” Exactly one brave soul, mercifully unaffiliated with the university, gently observed that, while the “name is offensive and undeniably inappropriate,” it was also last used almost a century ago and has nothing to do with racism in the present.

You can understand the predicament in which the university’s administration found itself. Student activists also demanded, among other things, the removal of a statue of Abraham Lincoln. Perhaps sacrificing the boulder and saving Lincoln would secure peace on campus in the near term. But what kind of a lesson is it for students when administrators and faculty not only accede to their unreasonable demands but also pretend to adopt their arguments? At least, one hopes they’re pretending.

Chamberlin Rock, reputed to be over two billion years old, now sits at a remote site. It has seen a lot, but maybe nothing like this. 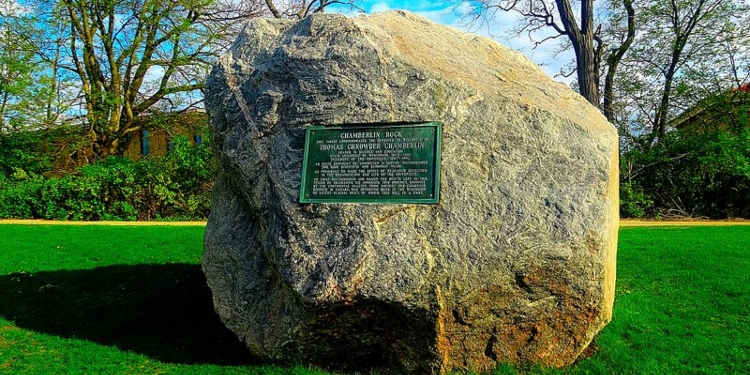