In the world of academics, on rare occasions, a department that cannot govern itself is placed under receivership. An outsider is empowered to run and reform the department. But what do you do when an entire university is dysfunctional? Evergreen State College in Olympia, Washington poses this problem.

You may have heard of Bret Weinstein, a professor of biology at Evergreen. He is seen, in this viral video, attempting to reason with dozens of students who disrupted his class late last month. They yell at him. Sometimes they curse at him. Later, they demand that he be fired because he is a racist.

How did he acquire this reputation? Weinstein, a progressive, is opposed to that part of the left which, under the cloak of promoting “diversity,” demands that certain assertions be accepted without question. Among them is the claim that the United States of the 21st Century is a white supremacist nation. Mandatory diversity training is a means of ensuring that everyone learns to sing the same tune. For that reason, questioning whether faculty members should be subjected to social justice Sunday School is regarded by this part of the left as tantamount to racism.

Weinstein particularly objected to a new policy according to which faculty would have to produce “official, yearly reflections on our individual progress relative to racial diversity.” One student of color, apparently expressing the views of many others commented that professors who took Weinstein’s position “are not professors I feel comfortable learning from.” I wrote recently about a relative few colleges and universities that are moving in the direction of demanding allegiance to a certain vision of social justice as a requirement for tenure and promotion. Apparently, Evergreen State is one of them.

Whatever the merits of Weinstein’s arguments, they hardly warranted the demonstrations that ensued. But trouble had been brewing for some time. Back in January, at the swearing-in ceremony for the new campus police chief, students “took the microphone and created a loud disruption so the event could not go forward. Along with air horn like noise makers, students yelled “F**k the Police!” and “Death to Pigs.”

What’s worse, though, than the actions of perhaps not that many students is the cravenness of the administration and faculty. If you like ritual public humiliations, watch Evergreen’s president, George Bridges, address his students. He is there to cave in to various demands. But like Weinstein, he is cursed at and treated with contempt. When at one point, he threatens to adjourn the meeting because he wishes to have a conversation, rather than a shouting match, Bridges is told “you were tone policing! What you’ve been speaking is anti-black coded speech.”

At least Bridges did not agree to fire Weinstein. In a statement in which he otherwise does his best to approximate the language of his captors (“My name is George Bridges. I use he/him pronouns”), he says that “free speech must be fostered and encouraged.”

Actually, not so much. Over fifty faculty members have signed a letter demanding a “disciplinary investigation” because Weinstein—wait for it—talked to the press. Weinstein did, indeed, go public with his concerns. He even appeared on Tucker Carlson’s Fox News Channel show to make his case. It is also true that the College received a chilling threat shortly thereafter. Such threats are frightening and deserve our condemnation. But what students and faculty seem to be complaining about, quite apart from the threats, is that the College has been brought into bad repute because Weinstein—the spoilsport—drew attention to what’s going on over there. It is, of course, humiliating to have the distasteful things you say and do make national news. But last I checked, at colleges and universities, we are not supposed to be obsessed with punishing the leakers.

As for President Bridges, in spite of his ode to free speech, he says, just before the 1:19 mark of this video that Weinstein is being “held accountable” for his actions, though he would not go into detail about a “personnel matter.”

An academic department as dysfunctional as Evergreen State College would be a good candidate for being put under receivership. Evergreen, at the very least, needs new leadership. President Bridges should step down. If he does not, Evergreen’s Board of Trustees should fire him. 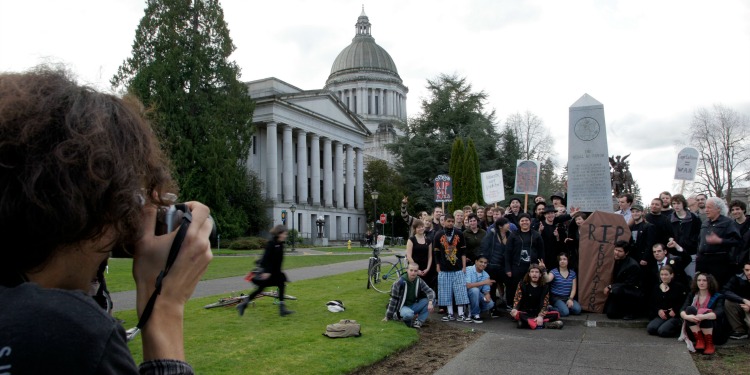