When it comes to anti-Semitism on the left, the political scientist Mira Sucharov can be too cautious. In 2016, after a speaker at Vassar College gave what seemed to me and many others an obviously anti-Semitic talk, Sucharov seemed to agree. Sure, the claim that Israelis delay returning the bodies of Palestinians because it takes time to harvest their organs “quacks like an infamous anti-Semitic myth,” she wrote. But that doesn’t make it anti-Semitic. Huh?

When she considered the “Deadly Exchange” campaign led by Jewish Voice for Peace (JVP), even Sucharov felt “queasy.” The Deadly Exchange campaign cynically seeks to exploit the relative popularity of Black Lives Matter by pinning anti-black discrimination on Israel and the American Jewish organizations opposed to the demonization of the Jewish state. JVP specifically targets educational trips to Israel by U.S. law enforcement. As JVP itself puts it, such trips advance “discriminatory and repressive policing practices,” such as “extrajudicial executions, shoot-to-kill policies, police murders, racial profiling, massive spying and surveillance, deportation and detention, and attacks on human rights defenders.”

Review the logic: U.S. law enforcement, so the argument goes, systematically discriminates against black people. To do that, they must travel to Israel, since that is where you go shopping for evil. But to make such shopping trips happen, you need Jewish organizations.

As one promotional video put it, “Who is making this deadly exchange possible? The main groups are actually U.S.-based Jewish organizations?” Get it? Scratch American race prejudice and you reveal the Jewish state, working with American Jews who care more about it than they care about their vulnerable fellow citizens. Here is how Sucharov puts it: “Ending the occupation and American police brutality are urgent and laudable goals. But the video falls into a trap of casting ‘the Jews’ as having outsized and pernicious influence on both.” This “logic is so deeply implied but so empirically thin as to imply a secret conspiracy.”

Under withering criticism, JVP eventually pulled the video, though without acknowledging wrongdoing. Sucharov was apparently satisfied. But the basic anti-Semitic reasoning behind it still animates the campaign, as Andrew Mark Bennett details here.

It is in this context that we should consider recent events at the University of California, Davis. Early last October, after anti-Semitic flyers were posted on campus, Jewish student leaders and Davis administrators agreed to measures meant to improve the climate for Jews on campus. Among those measures was a series of workshops on anti-Semitism, conducted by the Anti-Defamation League (ADL).

This was too much for the local chapter of Students of Justice in Palestine, which demanded that the workshops be canceled in favor of workshops conducted by, you guessed, it JVP. The ADL, which sponsors a counter-terrorism seminar in Israel, has been a special target of the Deadly Exchange campaign. In a petition, SJP charges the ADL with various crimes.

They engaged in illegal surveillance against, among others, Palestinian activists, over 25 years ago. 2. They criticized the Black Lives Matters movement over its explicit anti-Zionism; 3. They had the nerve to notice that newly elected representative Ilhan Omar demonizes Israel; 4. They criticized organizations, like SJP and JVP, that also demonize Israel; 5. They were behind a perfectly innocuous email to Davis’s then-Chancellor urging her to respond to the Boycott, Divestment, and Sanctions movement against Israel.

That’s it. The ADL was implicated in wrongdoing over 25 years ago, and they object to the demonization of the Jewish state.

Yet, according to UC Davis’s student newspaper, the Aggie, these charges were compelling enough to move UC Davis to put its plans on hold. So frightened was UC Davis’s chancellor Gary May by 149 signatures that he denied any involvement in one ADL workshop. He also assured everyone that UC Davis receives support from JVP, as well as the ADL. In thinking about anti-Semitism, the Aggie’s account suggests, UC Davis supports the ADL, which, notwithstanding justified criticism in these pages, combats anti-Semitism. But the university also backs JVP, which is tainted by anti-Semitism, even according to commentators like Sucharov.

What’s going on at UC Davis is not specific to universities. Women’s March leader, Tamika Mallory, urged a boycott of Starbucks because it sought to involve the ADL in its anti-bias training, insisting that the ADL is “CONSTANTLY attacking black and brown people.” Starbucks certainly appeared to respond to such demands by minimizing the role of the ADL, though Starbucks has denied it. The city council of Durham, North Carolina, announced last year that Durham would not participate in “international exchanges with any country in which Durham officers receive military-style training.” Israel was the only county mentioned. Durham’s police department was not participating in any exchange with Israel and had no plans to do so.

It’s important not to overstate the very small successes of the Deadly Exchange campaign. What’s disturbing in the UC Davis case, supposing the Aggie’s account is accurate, is that, even when it tries to focus on anti-Semitism, Davis’s administration is blind to it when it comes from the left. 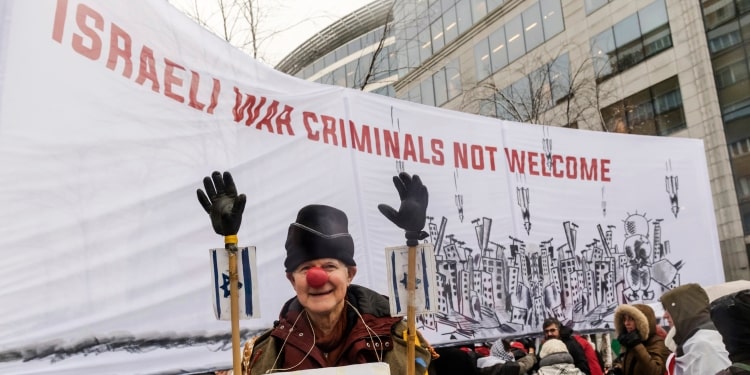