Shortly after this year’s election, InsideHigherEd ran a piece about just how thrown many college and university professors were by Donald Trump’s win. Count me among the thrown. Nonetheless, it is a relief to see that at least some of my colleagues have gotten up from their fainting couches, rolled up their sleeves, and returned to the business of true scholars. The Modern Language Association (MLA) begins its annual meeting on January 5th and, as is only appropriate for an organization devoted to the study of language and literature, has, yet again, the boycott of Israel on its agenda. The resolution up for consideration by the MLA’s Delegate Assembly is here. It calls for the MLA to support the call to boycott Israeli colleges and universities.

Like my colleagues, I often felt that the Trump campaign had even less regard for the truth than the average political campaign. So it is a relief to see that a few courageous professors have determined to take up the weapons of their adversaries and rely on distortions and outright lies to win their own campaign against Israel. Come to think of it, they have been hawking such distortions and lies, and worse, for some time, so perhaps it’s fairer to praise them for having the boldness to exempt themselves from standards on which they have so recently insisted. When one is fighting for social justice at one’s annual scholarly convention, anything goes.

Cary Nelson, a man of the left but the kind of dinosaur who thinks scholars ought to hold themselves to high evidentiary standards, does my colleagues the injustice of taking them seriously. He therefore—that churl!—points out some of the distortions and lies contained in a “A Report on MLA Members’ Visit to Palestine,” distributed by the resolution’s supporters.

Among other things, Nelson observes that the report falsely claims Arab-Israelis are not permitted to enter university until they reach the age of 21, that financial aid is not available for Arab-Israeli students, and that Arab-Israeli children are not allowed to enter kindergarten until the age of five whereas other Israeli children are allowed to enter at age three. Apart from those consequential errors, the report also includes at least one howler that suggests the writers are ignorant concerning the society they condemn, namely that the Druze are Christians.

But again this is all rather old-fashioned of Nelson. If the MLA wishes to survive in the post-truth society that they believe the Trump campaign has created and, at the same time, to fulfill its fundamental mission of enabling language professors to craft innovative Middle East policy stances, of course, they will have to make some compromises. Who other than fusty Cary Nelson and his gloomy band of spoilsports will object if the MLA votes to pretend that left-wing Israeli colleges and universities are objective allies of right-wing Zionism and that they are inextricably bound to the Israeli military, even when they are merely researching technologies that have both civilian and military applications?

As if determined to establish that he is a visitor from a bygone era, Nelson even takes the MLA leadership to task for presiding over a process whereby “documents aimed unashamedly at indoctrination have been distributed to 25,000 or so MLA members, and their elected representatives in the Delegate Assembly, have been charged with voting on that basis.” He asks, “does the MLA have no greater sense of professional or historical responsibility? … Does the leadership have no shame?”

Shame is for losers, right?

If the members of the MLA actually pass a resolution to boycott Israel and rely on propaganda to justify their vote, people will suspect that they have no ground to stand on when they criticize the incoming administration for being anti-intellectual. A real wet blanket might say that in undermining the distinction between scholarship and propaganda, MLA members will be putting weapons into the hands of their enemies since appeals to academic freedom somehow depend on the plausibility of this distinction.

But we’ll think about that tomorrow, after we’ve brought Israel to its knees by gesturing earnestly in its direction. Vive la résistance. 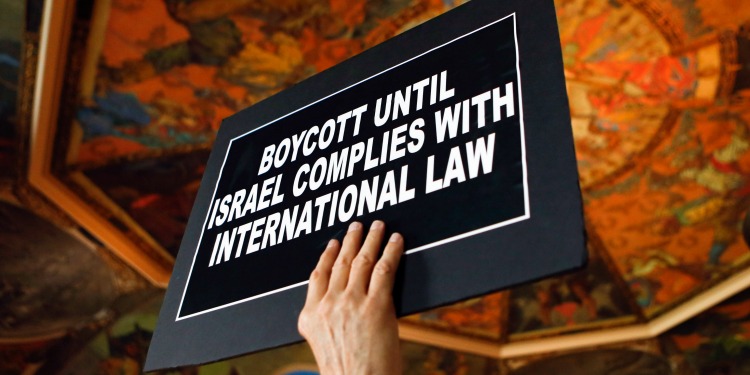