Andrea Bertozzi is a distinguished mathematician. A professor of mathematics at UCLA and the author or co-author of over 250 publications, Bertozzi has been elected to both the American Academy of Arts and Sciences and the National Academy of Sciences.

She is also now something of a lightning rod, not because of her work on higher-order partial differential equations but because of her work on predictive policing. Bertozzi’s research seeks to “determine where crime is likely to occur in the near future.” Whether predictive policing helps to allocate scarce policing resources better, and whether the data about crime on which any mathematical model must rely reflects racial bias, is a matter of controversy. Like other controversies among academics, this one has been joined in peer-reviewed journals. But even this controversy does not explain the trouble with Bertozzi. The trouble with Bertozzi, her critics allege, is that she is a collaborator. With the cops.

Bertozzi was to deliver the 2021 Noether lecture, jointly sponsored by the Association for Women in Mathematics (AWM) and the American Mathematical Society (AMS) to honor “women who have made fundamental and sustained contributions to the mathematical sciences.” Last June, Bertozzi, AWM and AMS agreed to cancel her lecture in light of protests surrounding George Floyd’s death the previous month. AWM apologized for its insensitivity in announcing Bertozzi’s selection during the protests and recognized that it had “ongoing work to do in order to be an organization that fights for social justice.” AWM’s inbox, it seems, had filled up “with well-crafted commentary on the pain that has been caused by algorithmic policing, the insensitivity of the AWM’s timing, and questioning the choice of speaker.”

A few days after AWM’s apology, mathematicians who objected to Bertozzi wrote a public letter that explained their objections and called for a “boycott” on “collaboration with the police.” Even if predictive policing were free of controversy, even if peer-reviewed research were to demonstrate its effectiveness and freedom from bias, “the structural racism and brutality in US policing” compelled these academics to profess that they “do not believe that mathematicians should be collaborating with police departments in this manner.”

Bertozzi has a small investment in the for-profit company formerly known as PredPol (the controversy has caused a name change), which contracts with police departments to help them identify “the highest-risk locations of specified crimes by time of day and day of week.” That is why Andrea Bertozzi could not be recognized by the Association for Women in Mathematics for her achievements as a woman in mathematics: A company in which she invests works with the fuzz.

Mathematicians are within their rights to call for boycotts of the cops, the military, corporations, or whoever. It’s unfortunate, though, that the AWM and AMS chose, in effect, to honor that call. Meanwhile, and predictably, the activists aren’t satisfied. The apology and removal of Bertozzi only prompted another “email deluge,” some lamenting the cancellation, others claiming “that the cancellation was an insufficient response to a deeply problematic action.”

Couldn’t the AWM be more explicit that Bertozzi wouldn’t receive the $500 that went with the honor? Is it so hard to acknowledge that “predominantly white women spaces perpetuate racism?” In the wake of these dueling reactions, the AWM bravely steered a middle course. They couldn’t choose an acceptable speaker, but they could replace the 2021 Noether lecture with “an event designed to educate the community about issues of racial bias and/or ethics in research, and the role of bias in algorithms and other analytical tools,” organized by a task force including “some members of AWM who were most vocal about our missteps.” Alas, the task force could not consist wholly of women of color, for although the AWM “wish[es] to center BIPOC in our event, we cannot place this additional burden entirely with them.”

There is nothing wrong—indeed, there is much right—with researchers investigating the ethical implications of their own research and acting on those investigations. There is something wrong with two major associations of professional mathematicians capitulating to the demands of activists who already decided what the results of such investigations should be. It is almost certain that the view of those boycotters—which, in suggesting that even attempts to improve policing are off-limits for scientists, come close to police abolition—are not widely shared by members of the organization that claim to work for them.

Meanwhile, Bertozzi is not only beyond honoring, at least in the eyes of graduate students at UC-Santa Barbara. Her talk there, according to the Foundation for Individual Rights in Education’s Disinvitation Database, has been canceled. 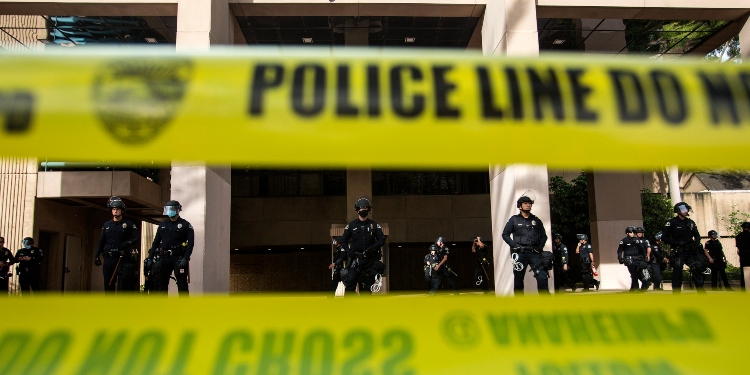