Get a load of what passes for moderation in the Democratic field. Pete Buttigieg, among the relatively few Democratic presidential hopefuls who register in the polls, is not known for sharp edges. As one commentator has put it, Buttigieg, the mayor of South Bend, Indiana, has tried not to take “sides in the political and cultural battles that have defined American politics for the past three decades.” He presents himself as the one who just may “bridge the divide between coastal states and fly-over states, between the party’s left wing and its center.”

If that’s so, the Democratic Party is in worse shape than one might have imagined. Buttigieg was asked last week about the Indiana Democratic Party’s 2016 decision to rename its signature Jefferson-Jackson dinner. That move took place amid a broader national rebranding effort by Democrats seeking to distance the party from its slaveholding roots. I get it. When building bridges, you may need to chuck an S.O.B. or two into the water. But Jefferson?

Here’s Buttigieg, the middle-ground man, on how he sees the middle ground on Jefferson (and here is the transcript of his interview with Hugh Hewitt, since Buttigieg now claims that the “media noise machine” is mischaracterizing his remarks). Jefferson, Buttigieg says, “knew that slavery was wrong” but practiced it. There is, however, also a “lot to . . . admire in his thinking and his philosophy.” Buttigieg doesn’t include but presumably intends to include among those “things to admire” the drafting of the Declaration of Independence, which Lincoln and others invoked to argue that slavery was a violation of our “ancient faith.” For that deed, and for blows Jefferson otherwise struck for liberty and equality, Jefferson receives this concession, according to Buttigieg: Democrats are not “blotting him out of the history books or deleting him from being the founder fathers [sic].”

That’s what the Declaration buys a guy nowadays—not getting disappeared from history. But “naming something after somebody confers a certain amount of honor,” and that, in Jefferson’s case, won’t do.

We’ve been having this out in higher education for a while now. In 2015, student activists at the University of Missouri, Columbia and the University of Virginia objected to statues of Jefferson on their campuses. In an InsideHigherEd essay on those controversies, Paul Finkelman, no slouch of a historian, is quoted as saying, “I don’t think you go around honoring people for behavior that was truly awful.” Even when judged by the standard of his own times, Finkelman adds, Jefferson’s record on slavery was truly awful.

Even if it were true that Jefferson’s record on slavery, which included unsuccessful attempts to legislate against its spread and perpetuation, was worse than that of other eighteenth-century slaveholders, I think that Finkelman and Buttigieg misunderstand what it means to honor someone. Whether that admiration is bestowed in acknowledgment of uncommon virtues, accomplishments, station (we grant even forgettable presidents some distinction), or all of those, one doesn’t honor everything a person was or did. In honoring a figure like Jefferson, we merely acknowledge a major figure in the advancement of freedom and equality, despite his flaws. The distinguished historian, Annette Gordon Reed, whose work on Jefferson’s relationship with his slave, Sally Hemmings, has provided some ammunition for Jefferson’s detractors, thinks that “Jefferson’s contributions to the history of the United States outweigh the problems people have with aspects of his life.”

To praise Jefferson is not to detract from serious consideration of his complicated legacy, including his misjudgments and misdeeds. Frederick Douglass’s “Oration in Memory of Abraham Lincoln” is perhaps the greatest praise of Lincoln ever spoken, even though Douglass says that Lincoln was “ready and willing at any time during the first years of his administration to deny, postpone, and sacrifice the rights of humanity in the colored people to promote the welfare of the white people of this country.” Nonetheless, judging “in the light of the stern logic of great events,” Douglass and others could conclude that “Abraham Lincoln was at the head of a great movement, and was in living and earnest sympathy with that movement, which, in the nature of things, must go on until slavery should be utterly and forever abolished in the United States.” I’ll take Lincoln over Jefferson, I think, but the same might be said of Jefferson.

Buttigieg, who offers the persistence of racism as the main reason for giving up on honoring Jefferson, does antiracists no credit when he insists that, when we honor a person who failed fully to unfold the logic of the Declaration he drafted, we slap American racial minority groups in the face. I assume that Buttigieg doesn’t mean that he considers members of those groups incapable of praising what’s praiseworthy, blaming what’s blameworthy, and coming to, as Douglass puts it, a “comprehensive view.” But just in case he does mean it, let’s be sure not to name anything after him. 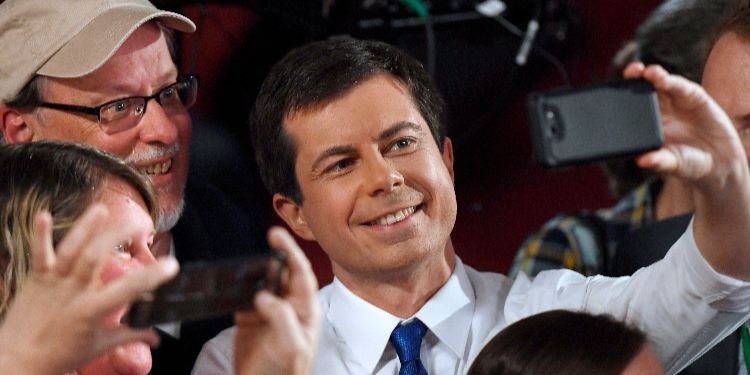