The 75,000 strong Mennonite Church-USA has joined a few other church organizations in voting to divest from companies “profiting from the occupation.” They seem rather proud of themselves for having chosen a “third way.”

What this means in the resolution’s terms is that the Mennonites will admit complicity in anti-Semitism and also admit complicity in Israel’s activities in the West Bank. They will form committees to navel-gaze concerning the first problem and single out Israel for economic punishment to deal with the second.

What’s shocking about this resolution, which Church leaders boast is the work of two years of study, is that it treats anti-Semitism and Israel’s presence in the West Bank as equivalent crimes. The Mennonites will resolve to avoid both! Although the drafters of the resolution acknowledged that “Palestinians have turned to violence,” they have evidently done so only to “achieve security” and “seek their freedom.” In spite of the resolution’s hand-wringing concerning anti-Semitism, there is not a word about Palestinian anti-Semitism and the role it has played in frustrating peace efforts in the region.

Nor are these peace efforts the subject of any reflection in the resolution. As far as the drafters are concerned, the Israelis marched into the West Bank in 1967—who can say why?—and have doggedly continued there, even though they could easily withdraw. The resolution recognizes that Israelis “feel threatened” but not that they actually are threatened. Indeed, that Israelis feel threatened is treated as evidence that security walls and other measures Israelis have taken for their security have been useless. It is hard to believe that intelligent and well-meaning people justify serious actions on so flimsy a basis, as if the ongoing need for security suggests that one ought to lay down one’s arms. But the Mennonite Church takes no risk, so they can afford to be frivolous about serious matters.

Apart from singling out the Jewish state for singular punishment, the Mennonites are studiously neutral. Somehow in their years of study, they missed that the Boycott, Divestment, and Sanctions (BDS) movement endorsed in 2015 an “ongoing, youth-led Palestinian uprising” whose weapon of choice at that time was the knife. There can be no excuse for not knowing this and therefore no excuse for simply noting, concerning BDS that “there are vigorous critics of BDS who raise a range of concerns” as well as groups who “support BDS as a nonviolent alternative to violent liberation efforts.”

Of course, some of those critics point out that BDS has at best cheered on anti-Semitism. But the Mennonites, though they are in bed with BDS-supporting Jewish Voice for Peace, see no need to get to the bottom of it. Their affectation of neutrality here means that they simply don’t care about the consequences of working hand-in-glove with a movement that, while it claims to be nonviolent, is effectively the propaganda wing of the violent “resistance.”

The Mennonites also studiously avoid taking a position on whether a majority Jewish state should exist at all. On the matter of a “two-state” or “one-state” solution—the latter of which means that Jews will be a minority everywhere in the world—that should be left up to “Israeli and Palestinian people.” Sure, the end of the Jewish state in the Middle East would leave Jews defenseless in a region teeming with anti-Semitism, but not to worry. The Mennonites have already “raised seed money and initiated plans for several conferences in the next biennium on topics including Mennonite involvement in the Holocaust and how we read scripture in light of the Holocaust.” They will make up for their blithe indifference to the fate of Jews today by conferencing, and maybe even shedding a few golden tears, about the fate of Jews last century.

The resolution has called “on Mennonites to cultivate relationships with Jewish representatives and bodies in the U.S.” I will leave it to knowers of the Torah to say whether we are required to associate with a small group of morally obtuse, self-righteous preeners. But if it were left up to me, I would tell them to go to hell. 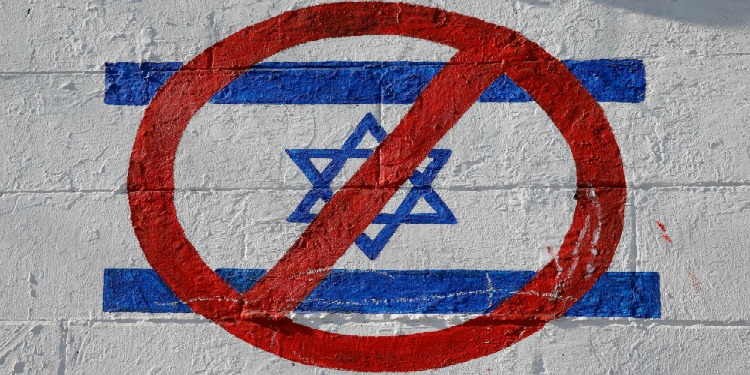