The last time I heard about New York University’s “pro-Palestinian activists,” they were attacking a pregnant Chelsea Clinton.

Clinton’s crime was showing up at a vigil for the victims of the Christchurch massacre. Clinton, it was explained, was all but responsible for the killings because she had criticized Ilhan Omar for making repeated anti-Semitic comments about Israel and AIPAC. You see, to criticize Muslims who make anti-Semitic dual loyalty charges is to support white supremacist terrorists.

Clinton’s tormentors met through the organization Students for Justice in Palestine, which teaches that anti-Semitism isn’t anti-Semitism when it is directed against Jews who support Israel.

Last April, amid a celebration of Israel’s 70th birthday in Washington Square Park, protesters from NYU’s SJP chapter stole one Israeli flag, burned another, and ripped the microphone from the hand of a student who was singing Hatikvah. Two members of SJP were arrested for, as SJP put it, “transgressions that warrant only fines while the Zionists were celebrating apartheid and laughing at murder.” That is, to them, what it means to celebrate Israel’s existence. The point of their protest was “to make being Zionist uncomfortable on the NYU campus,” as SJP’s president put it.

But that was last year. This year, this SJP chapter announced that it had been selected to receive a President’s Service Award, granted to organizations that “have had an extraordinary and positive impact on the University community.”

What has SJP done to have such an extraordinary and positive impact? The greatest impact they’ve had in recent months was on the passage of a boycott resolution by NYU’s student government. SJP members introduced and fought for it. That resolution, though limited in its reach, explicitly supported the Boycott, Divestment, and Sanctions movement, and made use of easily exposed propaganda.

NYU President Andrew Hamilton—presumably, the “president” in “president’s service award”—has repeatedly said that boycotting Israel, which is very nearly the sole purpose of SJP, is “contrary to” NYU’s “core principles of academic freedom” and  “antithetical to the free exchange of ideas.”

But it’s not merely that SJP’s mission contradicts the university’s. Adela Cojab, past president of the NYU branch of Realize Israel, has said that for “the overwhelming majority of [her] community, Zionism is a part of who they are, and they see an attack on Israel as an attack on their Judaism.” When SJP led other organizations in declaring that they wouldn’t work with pro-Israel groups, Cojab adopted the language of the left. Anti-Zionist activities were creating “unsafe spaces” on campus for many Jews, she said.

That may be going too far, but it is shocking that this university isn’t just tolerating an organization that promotes what many Jews consider anti-Semitism but patting it on the back. Giving SJP an award reserved for those who benefit the community is a gross insult not only to Jewish pro-Israel activists but also to the many others who, just as Cojab says, consider SJP’s attack on Zionism to be an attack on Jews.

If SJP is really set to receive such an award—NYU did not respond to my request for confirmation–it should be rescinded. 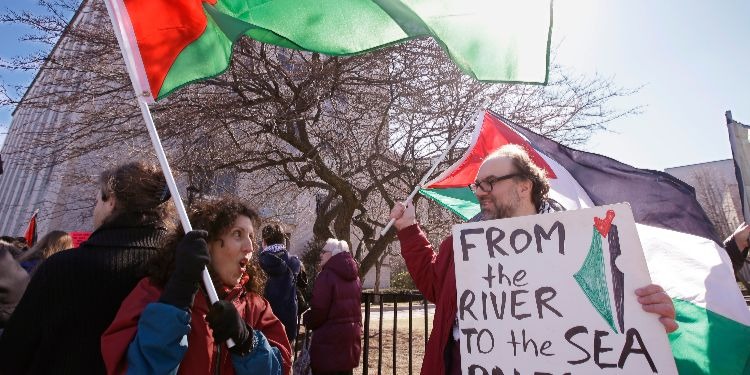