“It pains me to have to admit this but anti-Semitism isn’t just tolerated in some sections of the British Muslim community; it’s routine and commonplace. Any Muslims reading this article – if they are honest with themselves – will know instantly what I am referring to. It’s our dirty little secret. You could call it the banality of Muslim anti-Semitism.”

Unsurprisingly, as Muslims become more and more prominent in British politics and public life, these sentiments are escorting them to ever higher echelons. A series of recent episodes involving three Muslim up-and-comings – each young and female – illustrate the prevalence of anti-Semitic attitudes even among modern, educated, and “integrated” Muslim leaders. On each occasion, they have come under pressure for their views, and, as a result, a Muslim journalist has wondered whether Muslims are being denied the standard of free speech afforded others. Well, here are the three offenders, and you can be the judge.

Aysegul Gurbuz, a student at Warwick University, was until recently the youngest Labour councillor in the city of Luton, near London. She was suspended from the party and then resigned after it emerged that she had, several years ago, tweeted that Adolf Hitler – excuse me, “my man Hitler”, as she described the Nazi dictator – was the “greatest man in history.” Another tweet declared that “Ed Miliband is Jewish. He will never become prime minister of Britain.” She further informed followers that “if it wasn’t for my man Hitler these Jews would’ve wiped [out] Palestine years ago,” but another tweet issued the reassuring message that Iran would use a “nuclear weapon” to “wipe Israel off the map.” At her university student union, she had proposed a BDS motion, and she had also been a candidate for the union’s Ethnic Minorities Officer, a prospect that would be laughable if students with similarly repugnant views didn’t actually occupy such positions at other campuses.

That brings us to Malia Bouattia, the newly-elected (as of last week) President of the National Union of Students (NUS), the national umbrella of student unions in the UK. Ms. Bouattia, the daughter of an Algerian family but herself born in the UK, has never tried to hide her opinions. Having attended Birmingham University, which she described as a “Zionist outpost” due to its large Jewish society – which she considered to be a “problem” – she went on to serve as NUS’s Black Students Officer. In that capacity, she has campaigned against the government’s Prevent strategy, designed to tackle radicalization – especially of young Muslims. And she spearheaded the successful attempt last year to prevent NUS (which, like all student organizations, has a habit of opining on issues well beyond its direct purview) resolving to condemn ISIS for fear that that would be Islamophobic. Naturally, that same NUS conference was happy to condemn the Jewish state (and the leadership of NUS gladly endorsed BDS).

Despite concerns raised by Jewish students prior to her election, she won the presidency handily. In the days since, it has emerged that she had in the past warned that BDS (which of course she supports) should not distract campaigners from violent resistance against the Jewish state, which remains paramount. But hey, these sorts of smears are to be expected when the media is “Zionist-led”.

And this week has seen the resignation of a young freshman, Labour MP Naz Shah, as Parliamentary Private Secretary (essentially a parliamentary aide to a minister) to the Shadow Chancellor, the party’s number two, and eventual suspension from the Labour whip. This comes as a result of revelations that she tweeted, just prior to becoming an MP, that all the Jews in Israel should be relocated to the United States – which would also save the U.S. some money – as well as comparing Israel to Nazis, among other offences. Shah, it should be recalled, ran as the moderate alternative to George Galloway in the heavily Muslim-populated city of Bradford. And, to add insult to injury, she currently sits on the parliamentary inquiry into anti-Semitism.

These episodes are merely examples, albeit prominent ones, of the wider challenges of anti-Semitism on UK campuses, in the student movement, and in the Labour Party at all levels. But above all this is a problem in the growing British Muslim community. And given the age of each of these three protagonists, this problem is not about to die away. As for the journalist who frets that Muslims’ speech is being restricted, if this is what that speech sounds like when it’s censored, what further odium could the Muslim community possibly still be keeping secret? 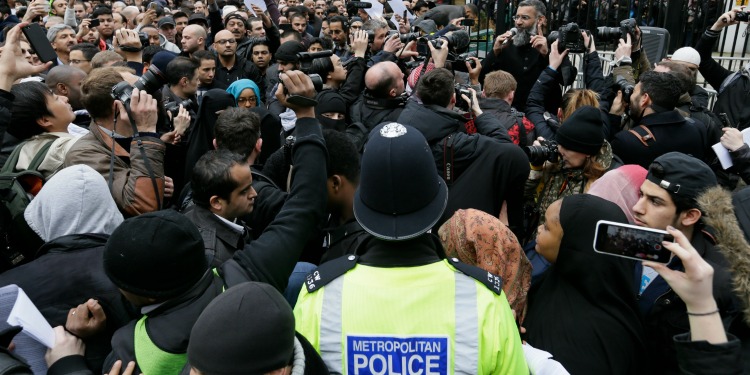