Almost as soon as the words left Donald Trump’s mouth, his surrogates began spinning. But the effort to blame the liberal media for the avalanche of criticism about him saying “Second Amendment people” could do something to stop Hillary Clinton once she appoints liberal Supreme Court justices simply won’t fly.

Maybe, as his exasperated defenders insist, he was referring to gun-rights supporters writing amicus briefs and submitting them to an indifferent liberal majority court. Or perhaps he was suggesting increased political activism. I doubt it, but who knows what was inside his head at that moment?

But that’s the problem. Words have meanings and no words are of greater importance than those uttered by a president or a would-be president. The whole world hangs on them. Trump’s jibe was deliberately ambiguous in his trademark style in which, like the veteran entertainer that he is, he encourages his audience to jump to whatever outrageous conclusion they might prefer. All of which is to say that while he may not have been contemplating an assassination, it is hardly unreasonable to interpret his statement as a dog whistle or a green light to the same people who have been chanting “lock her up” or threatening Clinton or Trump critics with violence.

Let’s concede that much of the media wasted no time to frame Trump’s gaffe in the worst possible context and to give him no benefit of the doubt. But that is no excuse. Trump knows the situation and yet fed his foes the ammunition they needed. That this comes just a day after his backers were touting the fact that he had intelligibly read a speech off a teleprompter and didn’t take the bait when protesters repeatedly interrupted him as proof that he had finally changed makes this incident all the more infuriating for Republicans.

Like anyone running under the GOP banner, Trump understands he has less leeway for mistakes than a Democrat. That was as true for the widely popular Ronald Reagan more than 30 years ago as it is now for Trump. But the correct response to this handicap is to watch your words to avoid needless trouble. What does anyone expect the media to do but to run with the opportunity that Trump has given them to bury him?

Trump has thrived by saying aloud on political podiums things that are usually only uttered by people sitting on bar stools to the delight of his core audience. But along with his attack on a gold star family last week, this time he really has gone too far.

Yes, I know. Prior predictions of his demise have been plentiful and always wrong. But with three months to go before the general election and with Trump now mired in a slump that has left him slipping farther and farther behind in both one-on-one matchups with Hillary Clinton and four-way polls with the Libertarian and Green candidates, this may seal his fate. For him to bring down on his head an even greater deluge of criticism than he’s gotten before at this crucial moment is more than bad timing. It may be a tipping point beyond which the election slips out of reach in spite of Clinton’s flaws and untrustworthiness.

Trump’s main problem remains his manifest unfitness for office. That’s why the reaction to words that seem to cross a line that no previous presidential candidate had ever approached will be so devastating. It won’t hurt him among the 35 to 40 percent that previously supported him but it does threaten to end his already dim chances of improving upon that total. It locks him into a position that seems to put him in danger of the kind of Barry Goldwater-style wipeout in November that could cost the GOP control of Congress.

If that happens and there is a liberal majority on the court next year, it won’t be the fault of the media or of critical conservatives who have spent the last year warning that Trump was heading for just such an outcome. It will be the work of a feckless candidate and his foolish supporters and enablers who have brought the GOP to the brink of catastrophe. 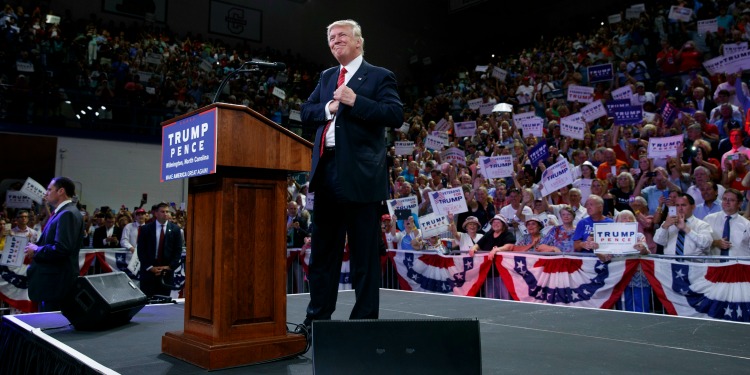