Yesterday, no one got “Cantored.” The phrase refers to the defeat of House Majority Leader Eric Cantor when he was upset in a 2014 primary by a Tea Party challenger. Many fans of Donald Trump, notably among them columnist Ann Coulter and Sarah Palin, were hoping that House Speaker Paul Ryan would suffer the same fate at the hands of Paul Nehlen, the Trumpkin who challenged him for his Wisconsin seat. But despite a lot of national press attention and some encouragement from the GOP presidential nominee himself (though that was soon walked back), Nehlen flopped. Ryan got 84 percent of the vote in what turned out to be an embarrassing showing for those who believe the GOP should be purged not only of those leaders who wish to govern rather than just burn down Capitol Hill but also of members who are as unenthusiastic about Trump and Trumpism, as Ryan has been.

But no one should assume that this primary mismatch is a harbinger of what it is to come. With Trump now looking more and more like someone who will lead it to a disaster that may cost the GOP its congressional majorities, the question that Republicans need to be asking themselves now is how to begin salvaging what can be saved even before they are faced with the task of digging out the rubble after November. But in order to answer that, they must understand that Trumpism may well survive and perhaps flourish even if its Dear Leader goes down to defeat.

The emergence of a strong faction within the GOP fold that not only embraces Trump’s brand of isolationism, protectionism, and nativism won’t go away no matter what happens this fall. The decision of much of the Tea Party base of the party to embrace a candidate who combines extreme views on immigration and trade while simultaneously advocating big government liberalism when it comes to spending rightly puzzles conservatives. Their rejection of advocates of more traditional Republican positions on foreign and domestic policy in favor of Trump can be explained in a number of ways. But it can’t be ruled out that a critical mass of Republicans really think that Ronald Reagan’s optimistic, ideas-driven conservative and internationalist movement is obsolete and needs to be replaced with a Trumpist blend of isolationism, protectionism, and populist blood and soil nativism.

That’s why I think the assumption that seems to be held by many, including perhaps Ryan and others who have issued unenthusiastic endorsements of Trump, about the fever breaking after the election may be mistaken. Though Trumpism without Trump would be a very different and less potent movement, it is a mistake to think even a landslide defeat for the Republicans will guarantee that it can resume its past stance as a supporter of a strong America on the global stage as well as support for free trade.

Of course, there is also the possibility that Trump won’t go away even after defeat but will instead continue to be a force in Republican politics. Aided and abetted by some in the entertainment wing of the party like Sean Hannity and others who are his unconditional apologists, we can expect to hear a steady diet of diatribes about how conservative never Trump advocates were the cause of his defeat rather than his own idiocy and lack of fitness for office. Indeed, Hannity has already begun sounding that theme. The same voters who believed him when he said the system was rigged in the primaries may also be ready to buy into the notion that his loss to Clinton was only possible because the election was rigged. The toxic and fallacious debate about who “stabbed Trump in the back” may well consume a party. This myopia may prevent the GOP from finally acting on the conclusions of the 2012 postmortem, which made obvious and much-needed recommendations about expanding support among women, young voters, and minorities.

The trouble is that those who led the revolt against the GOP establishment are so invested in the myth they promoted about the treason of the elites and the inefficacy of conservative principles that it is now baked into the political cake that is the current Republican Party. That sense of betrayal is now tied, perhaps inextricably, to Trump’s anti-NATO, anti-trade and anti-immigration true faith that gave strong pluralities to the nominee this past winter and spring. While Ryan may have had no trouble with the likes of Nehlen, these struggles will resume with a vengeance in 2018 and then 2020 in venues and circumstances that may be far more favorable to the Trump crowd.

The GOP may sober up after a Trump debacle—made even more likely by his latest outrage in which he seemed to joke about violence directed at Hillary Clinton—but don’t count on it. If it is to resume being the party of Reagan, it will require more than just a Clinton win. It will need a resurgence of support for conservative principles as well as some soul-searching on the part of those Republicans leaders who failed to unite to stop Trump before he sank their party. It isn’t too soon to begin the long and bitter fight to reclaim the GOP for conservatism. Unfortunately, that’s a battle whose outcome can’t be taken for granted. 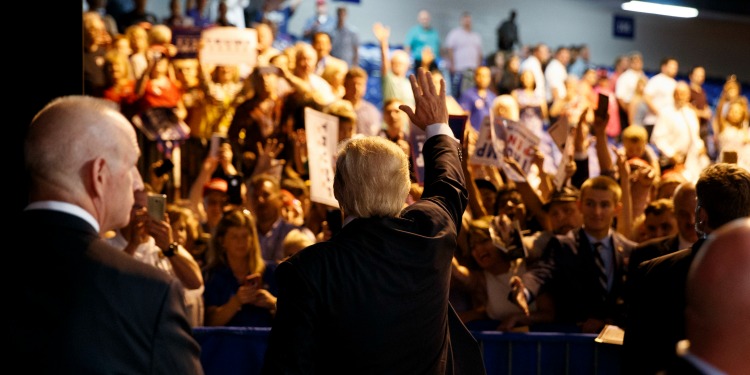