The people of Poland are right to be upset about calling the places where Nazis killed millions of Jews “Polish death camps.” The phrase shifts blame from the Nazis who perpetrated the Holocaust to the invaded nation where the bulk of the murders took place. But it’s hard to avoid the conclusion that the Polish government’s decision to push through a law criminalizing the use of the phrase is evidence of something other than a desire to keep the historical record straight.

Any discussion of the “Polish death camps” canard must start with one unalterable truth. In spite of the history of Polish anti-Semitism, the Holocaust is the fault of its German perpetrators and their collaborators, not the Polish people. The fact that the death camps were located in Poland was primarily a matter of logistics, not a function of a belief that Poles would help the Nazis kill Jews. Germans staffed the camps where many of the three million Polish Jews who were killed in the Holocaust died and, to a lesser extent, non-Polish Eastern Europeans; not Poles.

The second point to be underlined is the extent of Polish suffering under German occupation. The plight of Poles was not as dire as that of the Jews, all of whom were marked for death. But Poles were victimized more than any other occupied nation. At least 1.5 million Poles were deported to Germany for forced labor. Hundreds of thousands were imprisoned in concentration camps, and at least 1.9 million Polish civilians were killed during the war. That figure includes many who were murdered by the Communist occupiers of Eastern Poland in the aftermath of the 1939 invasion by both Germany and the Soviet Union.

The extent of Polish resistance to the Nazis must also be taken into account in any discussion of the period. The Poles fought bravely against impossible odds both at the outset of the war and in 1944 when they rose against the German. That revolt was brutally crushed in a defeat that was due in no small part to the cynical refusal of the advancing Soviets to help and resulted in the deaths of over 200,000 Poles.

Many thousands of Poles also risked their lives to save Jews. Among their number was Jan Karski, the Home Army officer who brought word of the death camps to the West and sadly was ignored by President Franklin Roosevelt.

But it is also true that many contemporary Poles are reluctant to accept another aspect of their history. Anti-Semitism was endemic in pre-Holocaust Poland. Many, if not most Poles were largely indifferent to the fate of their Jewish compatriots.

After the war, many Poles also were hostile to the pitiful remnant of Jewish survivors who sought to return to their homes and property, many of which had been taken over by non-Jews. This year marked the 70th anniversary of the massacre of such Jews at Kielce by Polish anti-Semites, a crime that many Poles continue to either deny or ignore. Such denial also exists about Polish murders of Jews at Jedwabne in 1941.

Thus, while we may sympathize with Polish anger about the “death camps” slur, any effort to correct that record should also be done with the consciousness that Poland has to account for its history, too. Fortunately, there has been progress along those lines. The heroic efforts of the late Pope John Paul II to combat endemic anti-Semitism both in his own nation and among Catholics everywhere deserve to be remembered with honor by Jews. The post-Cold War government of Poland also should be given credit for maintaining strong and friendly relations with Israel. Support for and interest in Jewish culture among Poles also testifies to the way Poland is changing.

The Poles would probably be better off refraining from passing laws that infringe speech. But whether they persist in this mistake or not, it would be a pity if arguments about the “death camps” law were to undo the progress that has been made to heal the historic rift between Jews and Poles. 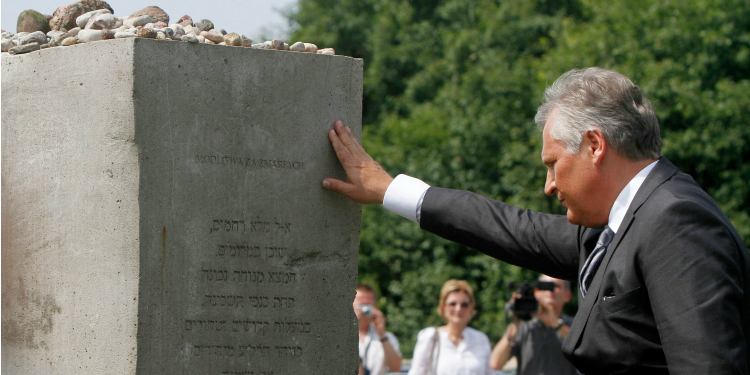