Last night’s preview of the first presidential debate at the military forum held in New York confirmed what many, if not most Americans think about the two leading candidates. In just an hour’s worth of gobsmacking political television, both made statements that were disqualifying. Clinton embroidered upon her previous lies about her email scandal and Trump dumped on the U.S. military while giving yet another endorsement to Vladimir Putin. But if voters woke up today scratching their heads about their dismal choice, Libertarian Party candidate Gary Johnson, the man even some otherwise sensible people are demanding to have included in the debates, went on television to demonstrate that he is as bad, if not worse, than either Hillary Clinton or Donald Trump.

The NBC forum is being perceived in some quarters as a victory for Trump because of the pasting Clinton took from both moderator Matt Lauer and audience members who asked about her email scandal. Liberals think this is all very unfair since it allowed Clinton to spend less time demonstrating that she is more knowledgeable than Trump. But Clinton’s continued denials that she knowingly sent classified material on her insecure home server are outrageous. Yet not quite as outrageous as her claim that her server was actually more secure than well-protected systems operated by the government. You can’t admit responsibility for what you say was a mistake and in the next breath claim to have done nothing wrong if you want to retain a shred of credibility. Her sense of entitlement about breaking the rules and cavalier attitude toward the truth make for a depressing spectacle. And its because of that combination that Americans don’t trust her.

Clinton’s answers about foreign and security policy — where she has an advantage over Trump — weren’t much better. Trying to be both a responsible internationalist and an antiwar leftist is an impossible task and Clinton failed miserably. You can’t promise to beat ISIS while at the same time vowing never to commit American ground troops to the fight and still sound like you’re the serious person you claim to be.

That Lauer and the audience easily cornered Clinton speaks to her weakness as a politician. That the Today Show host had less success holding Trump accountable for the string of outrageous and false statements that poured forth from his mouth during his half hour speaks to his strength as a media personality. It may also be, as we saw during the Republican primary debates, that the sheer magnitude of his falsehoods is such that it defeats the ability of ordinary people to cope with them.

Suffice it to say that for an American presidential candidate to praise Vladimir Putin and prefer him to our own president is, by itself, disqualifying. The Obama presidency deserves harsh criticism, but anyone who sees the Russian dictator as a role model is simply running for president in the wrong country. That also applies to Trump’s trashing of our military, hostility to the presence of women in the armed forces, and clear desire for only those generals who will tell him what he wants to hear. Does anyone really believe he has a “secret plan” to defeat ISIS? Even if he does, what are we to make of a man who vows he won’t send troops to Iraq or engage in regime change but then says he also intends to steal oil from that country and Libya, a colonial quagmire project that would make George W. Bush’s invasion of Iraq look like an act of strategic genius.

This morning, however, Gary Johnson exceeded Trump and Clinton in the contest to determine which candidate was the most unqualified to be commander-in-chief. On the “Morning Joe” program, Mike Barnicle asked Johnson what he would do about the situation in Aleppo. Johnson replied, “What is Aleppo?” Barnicle responded, “You’re kidding,” to which Johnson simply said, “No,” with a deer-in-the-headlights look.

Later Johnson issued a statement claiming that he was actually aware of the ongoing human-rights catastrophe in Syria that centers on the siege of Aleppo and apologized for the gaffe. But coming from the same man who claimed at the Libertarian Party convention that he wasn’t sure whether U.S. involvement in World War Two was justified, this stunning moment of ignorance ought to eliminate him from consideration for those voters desperate for an alternative to Trump and Clinton.

Americans will have two more months to hear more from the candidates. But no matter where you stand on the political spectrum, honest observers must admit that within a span of 12 hours, Clinton, Trump, and Johnson have all proved again why none of them should be president. 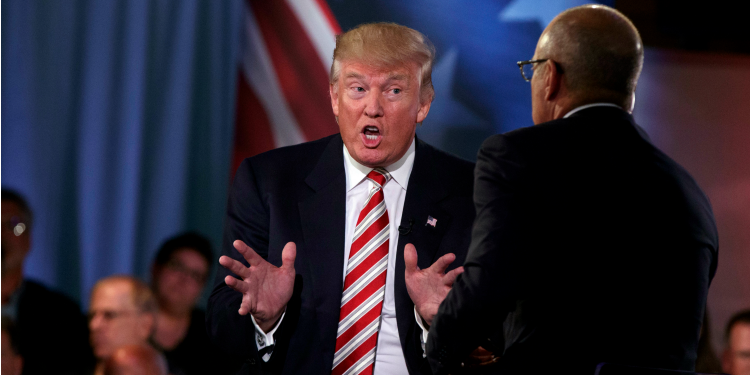