Outraged liberal ideologues and the teachers’ unions are reassuring themselves that Betsy DeVos won’t be able to accomplish much as secretary of education. They shouldn’t be so sure.

Since Donald Trump tapped her for the job last week, the rumblings from the left about DeVos have been loud enough to signal that the public education establishment understands that it has something to fear. Not since William Bennett led the Department of Education in Ronald Reagan’s second term has the nation had a person in this position who could be counted on to push back against the unions in a manner that might actually make a difference.

DeVos is a mainstream conservative Republican; not a Trump crony. In her work as chair of the American Federation for Children, she has been one of the country’s leading advocates of school choice. As such, her appointment indicates that, at least as far as education is concerned, Trump may be serious about keeping a promise to promote efforts to shake up the educational establishment and push for more charters and vouchers programs.

The merits of the ideas with which DeVos are associated are easily understood. The teachers’ unions and their Democratic Party political allies have done everything in their power to prevent anything that might bring accountability to public education. They have campaigned to block measures that will base teacher advancement and security on student achievement. They have made an all-out war on efforts to give parents a choice on how their kids can be educated, including proposals that will give poor and middle-class families the ability to send their kids to private and parochial schools instead of public ones that are often failing.

For a generation, liberals have largely been able to thwart reform efforts by casting the issue of education reform as a partisan one. While posing as defenders of the common people, they have effectively trapped poor kids in failing institutions rather than give their parents the ability to put them in schools where they might have a better chance. They have said their goal is to protect education from conservatives while forgetting that the concept of public education is one that ought to embrace private and government-run, religious as well as secular schools. They have thwarted and limited experiments in choice and then disingenuously claimed that charters or vouchers programs don’t work. They have engaged in spectacular examples of hypocrisy, such as the Obama administration’s successful efforts to shut down a Washington, D.C. vouchers program passed by congressional Republicans. That effectively meant that poor children would be deprived of a chance to go to an elite school attended by the children of President Obama, even as he masqueraded as their champion.

It is true that the power of a secretary of education to create change in our nation’s schools is limited. The bureaucracy over which DeVos will preside once she is confirmed is relatively small and largely concerned with administering student loans and enforcing civil-rights laws (including some that are not even on the books, such as the Obama administration’s effort to force schools to create transgender bathrooms). But DeVos could direct more of its energy toward support for a raft of good ideas, including tax credit programs, choice, charters, virtual schools, magnet schools, and homeschooling. As DeVos has said that America has to stop treating education as simply a function of a parent’s zip code and nothing else. The same applies to their income.

DeVos might also be the person to spearhead the idea that Trump spoke of during the campaign—a $20 billion initiative to fund school choice around the country. That sounds great but, as Jason Riley pointed out in the Wall Street Journal, a federally administered program will mean federal control and conjures up a lot of the same problems previous Washington-based ideas have created. Education is best controlled on the local and state level, and that is where Republican governors and legislatures should be following the lead of DeVos.

Whether Trump goes ahead with his federal education initiative or not, the main service DeVos can provide the nation is to use her bully pulpit to advocate for change. School choice is no threat to good public schools or to the separation of church and state. The basic premise of choice programs and other reform ideas is that all of our children—whether rich or poor, located in wealthy suburbs or inner city neighborhoods—are alike in that they are all made in the image of God. Our responsibility is to provide each of them with the opportunity to get the sort of education that will give them a chance in life instead of warehousing them in a government-run school system dominated by teachers unions that don’t have their best interests at heart. 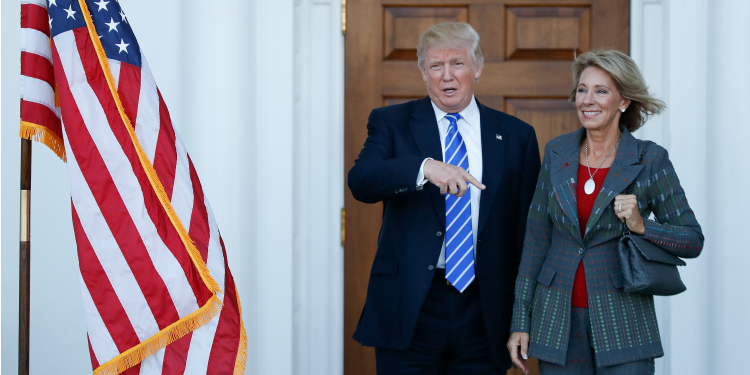